Between wind-surfing sessions and waiting for his Nobel Peace Prize, Secretary of State John Kerry took time over the weekend to chat with his Russian counterpart, Foreign Minister Sergy Lavrov.   The topic of conversation was Moscow's heightened military presence in Syria.

Like the proverbial blind hog that stumbles across an acorn, Mr. Kerry (along with the rest of the Obama foreign policy team) have suddenly realized that Vladimir Putin is significantly increasing military support for the government of Bashir Assad.  While Moscow has been training and providing logistical assistance for Assad's army for many years, Putin's support appears to be entering a new phase, with recent reports of Russian troops fighting alongside Syrian forces; the delivery of additional equipment and supplies, and claims that Moscow is preparing an airfield to serve as an operations hub in Syria.

From the U.K. Telegraph:


Russian troops are fighting alongside pro-Assad forces in Syria, state television in Damascus and several reports have claimed.


It is reportedly possible to hear Russian being spoken by the troops in the footage.


In further indications of Russian "mission creep" in Syria, a Twitter account linked to Jabhat al-Nusra, al-Qaeda's Syrian branch, published images of what appeared to be Russian planes and drones flying over Idlib. 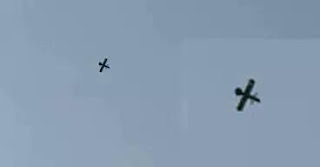 Why the sudden escalation by Putin?  There are several factors at work.  First, the war continues to go badly for Bashar al-Assad; as ISIS steadily gains ground, Mr. Putin and his military advisers may have decided they had no choice but direct intervention, otherwise, the Syrian regime would face near-term collapse, giving terrorists full control of the country and its military resources.


Moscow may also be concerned about Assad's weakened grip on weapons of mass destruction within his arsenal, specifically, chemical and biological rounds.  There have been several chemical attacks by ISIS forces in recent weeks; on-line postings from various terror groups suggest the weapons came from Syria's military stockpile.  The introduction of Russian troops could improve security of Assad's remaining assets.

But Moscow may have another strategy in mind, with regard to Syrian WMD.  Russia currently holds the rotating presidency of the UN Security Council and it has delayed efforts to assign blame for chemical attacks in Syria.  Putin's decision to stonewall the inquiry may reflect efforts to hide the responsibility for recent attacks, particularly if Russian advisers and combat forces played any role in carrying out those strikes.

Another possibility?  Assad is planning a heightened chemical warfare campaign against insurgents, and will utilize Moscow's technical expertise to carry it out.  If more chemical attacks are in the offing, Putin certainly doesn't want UN inspectors nosing around the countryside, or debating responsibility at hearings in New York or Geneva.  However, the timeline for that sort of strategy is very limited, since Russia will hold the Security Council presidency for only one month, before handing it off to Spain in October.

Russia will also gain brownie points among allies (and potential allies) in the region by stepping up to defend a client state.  While the U.S. makes--and breaks--promises, Vladimir Putin looks like a man of his word, something that isn't lost on other countries looking for support against ISIS.  So far, he hasn't committed enough forces to make a difference militarily, but the Russian leader understands the power of symbolism and its importance in the Middle East.  Against the backdrop of a U.S. retreat in the region, even a token deployment by Moscow projects an image of power and strength.

The Syria expedition can also serve other purposes.  As Moscow's military presence grows, it would not be surprising to see a deployment of the S-300 air defense system, ostensibly to protect Russian forces from ISIS drone strikes, or attacks by captured Syrian military aircraft.  Never mind the terror group's capabilities in these areas are virtually non-existent; the manufactured "threat" will allow Moscow to extend protection for Iran's nuclear facilities to the edge of Israeli airspace, greatly complicating any potential strike by the IAF.  It has long been postulated that Israeli fighters would cross Lebanon and southern Turkey to reach Iran; the presence of S-300 batteries in northern Syria might force the Israelis to abandon that route, forcing them to fly across Jordan and Saudi Arabia, or take a long, over-water route across the Red Sea, the Arabian Sea and into the Persian Gulf.

In any event, Putin has once again out-maneuvered the U.S., at minimum cost.  He has accurately assessed the weakness and fecklessness of the current administration and is prepared to maximize his opportunities over the last 500 days of Obama's Presidency.  It would be nice to say our Commander-in-Chief has some sort of counter-strategy, but he doesn't.  Barack Obama helped make a hash of Syria and now he simply doesn't care.  There's a library to build and more rounds of golf, far more pleasant tasks for his last 16 months in the Oval Office.

About Syrian sea routes... Have you seen yesterday's news yet? "Russian submarine with 20 ICBMs and 200 nuclear warheads is sailing to Syria"

Who with more credibility than Debka, would know for certain and be at liberty to verify? Exactly; no one! Putin is quite a mad hatter, is he also that insane or desperate?

Vigilis--I saw the Debka item and deliberately excluded it, given the site's credibility problems. If the Russians are sending their newest boomer to the Med--and specifically to Syria--I'd look for some chatter in the British press, specifically the Telegraph and perhaps the BBC. A portion of the UK media is not in bed with Obama and many of their defense reporters are far more knowledgeable than their American counterparts.

If the boomer is moving to the Med, I'd expect some leaks from the MoD (to selected journalists) about increases in ASW activity in the Norwegian Sea and North Atlantic, or at a minimum, some report about a suddenly-announced exercise involving those assets in the area listed.

IMO, Putin is neither insane nor completely desperate. He has read his adversary (Obama) correctly and understands he has complete freedom of action as long as the current POTUS is in office. When the Soviets hinted about sending airborne forces to the Middle East at the end of the Yom Kippur War, Nixon put SAC on worldwide alert and began moving assets. The Kremlin backed down. Five decades later, the Russians may be moving a first-strike asset to THE global hotspot and Obama can't be bothered.

There are plenty of people in western defense circles who are quite alarmed at the lack of U.S. leadership. If the SSBN story is true, expect leaks in the next 48 hours, beginning in Europe and spreading to the U.S. (Washington Times, Free Beacon, Washington Examiner, perhaps Aviation Week). MSM will cover it only if they have to.

Good Nate, I can neither agree with Debka (yes, their historical credibility problem) nor that your, "If the boomer is moving to the Med, I'd expect some leaks from the MoD (to selected journalists) about increases in ASW activity in the Norwegian Sea and North Atlantic, or at a minimum, some report about a suddenly-announced exercise involving those assets in the area listed."

Were the Russian SSBN movement true, the UK, US, or Scandanavian press could not verify such movement unless tipped by Russia or the MoD, etc. How else could a stealthy action be verified? Russia could certainly have a notoriety motive, but why would the MoD, Sweden, Norway, etc. risk tipping their intelligence capabilities for a useless, public headline promoting Putin's boldness?

I am seriously asking for the benefit of your experienced input, here. I have neither my own clue nor set opinion. Simply asking you...

Thank you in advance for any suggestion here. The U.S. once had one of our SSBNs surface for political effect off the Africam coast decades ago. Debka is foolish to claim Russia sent any SSBN, unless surfacing off Syria is exactly what is feared.

Fear hardly reminds me of Israel in any of their state apparatus. You?

There are enough ways to detect a sub without necessarily tipping the "exact" system that established contact. Governments often leak this sort of info to let the adversary know that we're aware of their activities, and potentially deter their plans. Stealth is the number one weapon of any submarine; if Moscow believed we were actively tracking their newest boomer (and maybe have a Virginia-class attack boat in trail), they would probably reconsider their plans.

Still, I think the odds that Russia is sending a boomer to the Med are low. However, there is an interesting battle going on with the U.S. trying to restrict airspace that Moscow needs to reinforce its presence in Syria. We convinced Bulgaria to colse their airspace today and we're leaning on the Greeks as well. That won't totally shut off the air routes, but it will make it more dificult.

Russia's friends have one advantage our friends don't have. Russia keeps its promises.

PS. Putting a boomer in the Mediterranean is pointless. Debka is notorious for fraudulent posts.