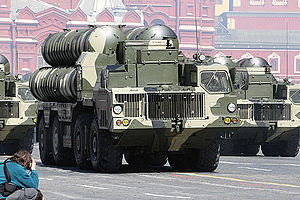 An SA-20 transporter-erector-launcher (TEL) at a Moscow military parade in 2008. Iran's announcement that it is building a new $300 surface-to-air missile base has renewed speculation that Russia may soon deliver the SA-20 to Tehran, greatly improving its air defense capabilities (Wikipedia photo).

Amid reports that Israel is finalizing plans to strike Iran, Tehran has announced plans for a massive, new surface-to-air missile base. More from the Times of Israel:


The new base, located near the city of Abadeh, in southern Iran, will cost $300 million, be home to 6,000 personnel, and host seven battalions, Iran’s Fars news agency reported Tuesday.

The Deputy Commander of the Khatam ol-Anbia Air Defense Base, Mohammad Hosseini, said the base, the largest of its kind in Iran, will also include one of the most important military training centers in the country.

Last month, a senior Iranian air defense commander asserted that all Iranian air defense units and systems are fully prepared to repel possible enemy air raids.
The key word in that account is "training." Iran already has an established support infrastructure for its older SAM systems, including the U.S. made HAWK, purchased by the Shah in the early 1970s. As the HAWK nears the end of its service life, along with older Russian and Chinese systems such as the SA-5 and CSA-1, it would make little sense to build a huge support center for those aging systems. Iran also has the newer SA-15 mobile SAM, but (as with its older counterparts), the support network is already established.

On the other hand, it would make a great deal of sense to build a training base (and centralized support facility) for a new system like the Russian S-300. Tehran has long hoped to acquire the advanced SAM system, but Russian has never fulfilled a contract that was reportedly signed years ago, bowing to pressure from the U.S. and other western nations.

But announcement of the new SAM training center near Abadeh (in southern Iran) may be the best indicator yet that the S-300 will become operational with Tehran's air defense forces. Widely regarded as one of the world's most potent SAM systems, the S-300 (NATO designator: SA-20) is highly effective against both tactical aircraft, stand-off platforms and tactical ballistic missiles. With a maximum range of 90-120 miles (depending on variant), multiple battalions of S-300 could provide overlapping coverage of nuclear facilities and other high-value installations in Iran, while greatly complicating Israeli tactical planning.

Obviously, the new support base won't be ready for at least a couple of years, but completion of the facility is not a requirement for the S-300 to enter operational service. If Moscow is proceeding with deliveries of the system, it is likely that the initial cadre of crews and maintenance personnel was trained in Russia, and can provide an operating capability as soon as equipment arrives. There are unconfirmed reports that support components for the system were shipped to Iran last year, but neither Moscow, Tehran or western intelligence agencies have acknowledged the arrival of the S-300 in Iran.

If deliveries of the S-300 are in progress or imminent, it will add new urgency to Israel's strategic calculus. Even a rudimentary deployment of the system represents a game-changer for Iran, forcing Israel to modify its tactical planning. At a minimum, the S-300 would force the Israeli Air Force to allocate more assets for the suppression of enemy air defenses (SEAD) mission. However, for every fighter assigned that mission (or for every anti-radiation missile loaded on an aircraft pylon), Israel will diminished capabilities to put bombs on the most important targets--Iran's nuclear facilities.

Imagery analysts in the U.S., Israel and elsewhere will be watching the work at Abadeh very carefully. If the new SAM base is being built for the S-300, it will be patterned on similar facilities in Russia, China and other countries that operate the system. Intel experts will now fairly soon if the new facility will support the S-300, further influencing military decisions on what must be done about Iran and its nuclear program.
***
ADDENDUM: Both the United States and Israel have extensive intelligence on the S-300 and its various models. But neutralizing the system (or avoiding it) is a definite challenge, one made more difficult by the long distance associated with an Israeli airstrike against Iran, and the limited assets that could be employed.
Posted by Unknown at 7:12 PM