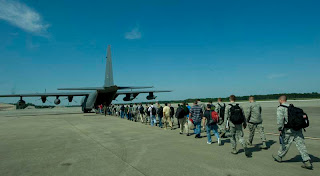 Members of the 11th Intelligence Squadron depart Hurlburt Field, Florida, as part of the hurricane evacuation from that base (U.S. Air Force photo via Air Force Times).
Like the proverbial blind hog, even Air Force Times--and the rest of the MSM--stumble across a real nugget every now and then. In this case, it came in the form of an Air Force photo that currently appears on the paper's website (posted above). It's an illustration of the capabilities that must be preserved for today's modern battlefield, even when a hurricane threatens.
According the caption, the photograph shows members of the 11th Intelligence Squadron at Hurlburt Field, Florida, evacuating ahead of Tropical Storm Issac. Hurlburt, home of Air Force Special Operations Command, is located in the Florida panhandle, and is expected to feel the effects of Isaac as it churns ashore in the next 36 hours.
At this point, a lot of former blue-suiters are scratching their heads. Traditionally, most hurricane evacuations are limited to aircraft, their crews and a few maintenance personnel. Everyone else hunkers down at home station and prepares for the worst.
So why are dozens of spooks being flown out of Hurlburt before the storm? The answer lies in the mission and capabilities of the 11th IS. From another AFT article, this one published in 2008:

Since the 11th stood up in 2006, it has grown from just a few to a force of 240 airmen and contracted imagery analysts. Officials see it growing to 500 in the next couple of years, [ a former commander ]said.

Stood up primarily to analyze intelligence collected by MQ-1 Predators and MQ-9 Reapers associated with Special Forces missions, the 11th analyzes about half of all the full-motion video collected in Iraq and Afghanistan, [the official] said.
The 11th also operates a dedicated fusion cell which melds FMV with other intel information, giving commanders a more complete look at the battlefield. And with the unit responsible for much of the FMV support in the U.S. military, it can't afford to have its most valuable asset--those highly-trained analysts--sitting at a base that may be without power (or running on generator back-up) for days, or even weeks after the storm, with limited communications capabilities. And with today's "wired" intel networks, the analysts leaving Hurlburt can recreate their capabilities from locations ranging from St. Louis to Fort Bragg, preserving a vital analytic mission.
It's just one more reminder of the tremendous intel "reach-back" system that is essential for modern combat operations. Who would have ever thought that an intel unit would have the same evacuation priority as the F-22s at Tyndall, or other aircraft based along the northern Gulf? But there are very good reasons for pulling most of the 11th IS out of Hurlburt, and those reasons can be found with our combat units around the globe.
Posted by George Smiley at 11:37 PM

Beginning in late 1967, the 6990th Security Squadron, Kadena AB, Okinawa, bugged-out with the RC-135s and their front end crews to Clark AB, P.I., and continued 24 hour continuous orbits in the Gulf of Tonkin or over Laos every time a typhoon threatened Okinawa. Home base SCIF at Clark was the 6922 SS and it's AN/FLR-9 "Elephant Cage." The 11IS is following a long tradition!

Judging from your entry, it sounds like the only folks who left Okinawa for the Typhoon-evacs were the mission crews and front-end crews for the RC-135s, along with the aircraft. The Hurlburt evac is unique in the sense that the 11th doesn't "own" any aircraft, and judging from the picture, it looks like at least one-third of the squadron was evacuated.

However, there were a lot of vital assets that were moved from Hurlburt due to Isaac. According to one report, the Ospreys that left Hurlburt carried some 400 personnel to Little Rock AFB, AR. Not sure if all of those were associated with the Osprey unit at Hurlburt, or included personnel from other key units like the 11th.

If those men and women are collectively an irreplaceable asset, then why are they all being put on the same plane?