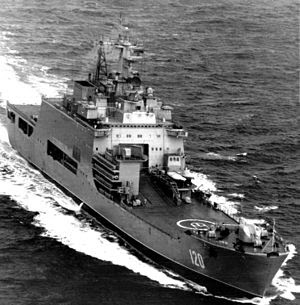 An Ivan Rogov-class "large landing ship" of the Russian Navy. Only one of these vessels remains in service, creating potential problems for the evacuation of Russian nationals from Syria (Wikipedia photo).
At various points this summer, Russia has vowed to send an amphibious group to the eastern Mediterranean, ostensibly as a show of support for the failing regime of Bashir Assad. So far, the ships haven't arrived, though they are supposedly enroute.
And there's still confusion as to their mission and itinerary. According to the Los Angeles Times, Moscow announced on Friday that the amphibious group would not conduct a port call at Tartus, the small Russian naval facility on Syria's Mediterranean coast. Then, just a few hours later, a Russian military spokesman offered a revised operational statement, saying that the amphibious flotilla "might call on Tartus to replenish supplies," if "the period of the trip is extended."

In other words, the Defense Ministry is still mulling its options. But, as the situation in Syria continues to deteriorate, an amphibious squadron could prove very useful in securing the Tartus facility, and arranging a limited Russian evacuation from Syria. An under-strength battalion of naval infantry is embarked on three landing ships assigned to the squadron. Equipped with helicopters and armored vehicles, the Russian "marines" could remove personnel and equipment from Tartus, while preventing rebel attacks against the base.

That mission may assume a new urgency, given reports of Iranian "advisers" being taken prisoner by the insurgents. Members of the IRGC have been active in Syria since the uprising began, providing assistance to the Assad government and (by some accounts) assisting in heavy-handed security operations. If IRGC personnel are being plucked off the streets of Damascus (or captured in fire-fights), then no foreigner (read: Assad ally) is safe, and many of them want out. After all, the rebels have little regard for the Russians who rank just above the Iranians in terms of popularity.

Unfortunately, the Moscow's current military force is inadequate for large-scale evacuation operations. By some accounts, there are 30-60,000 Russian nationals in Syria; the amphibious ships that may dock at Tartus can handle only a fraction of that total, and there's the difficult (and dangerous) task of getting them to the embarkation port. Put another way, you'll need more than 360 Russian naval infantry and a handful of helicopters to carry out such a massive evacuation.

Another option is securing an air bridge at Damascus International or a large Syrian military airfield. A stream of Russian military transports and charter flights could evacuate far more personnel from Syria, but even that possibility is fraught with danger. First, there's the matter of shifting loyalties in the Syrian military. Officers and installations loyal to Assad today may shift allegiances tomorrow, leaving the Russians caught in the middle.

Additionally, the air bridge option still requires the assembly and movement of large numbers of civilians through war zones to the departure point. Their safe transit depends largely on the good offices of the insurgents, who may not be inclined to let the Russians past, given Moscow's historic support for the Assads and their brutal regime, which has murdered tens of thousands of Syrians over the past five decades.

As we've observed in the past, non-essential [personnel] evacuations, better known as NEOs, are among the most difficult military operations to plan and execute, even under ideal conditions. The number of individuals who show up at the assembly points is often two or three times the original estimate, and getting them to safety is a terribly difficult proposition, at best.


Consider the U.S. evacuation from Saigon in the spring of 1975. Thousands of Americans were removed from the country over a two-month period (along with 110,000 South Vietnamese), but the final stages of the operation were chaotic, symbolized by long lines of people awaiting evacuation from the roof of the U.S. embassy in Saigon.

Still, the United States military had a number of advantages in the Vietnam operation. Military Airlift Command (MAC) had dozens of transports shuttling between various airfields in South Vietnam and U.S. bases in the Far East, including Clark AB in the Philippines. Civilian charter flights aided in the effort, and helicopters continued ferrying evacuees to ships in the 7th Fleet, stationed off-shore.

As the situation in Syria rapidly declines, Russia has few of these assets to draw upon. Its amphibious capabilities are modest, and its military transport fleet is equally modest. And, when you factor in such considerations as airspace access (through countries like Turkey or Iraq), evacuation planning becomes even more complex.

At this point, it looks like many of the Russian nationals in Syria will be stuck for the duration and it's just a matter of time before the rebels begin boasting of their Russian hostages as well. As a former KGB officer, Vladimir Putin is certainly aware of these issues, so it will be interesting to see how he handles the situation in Syria. Mr. Putin likes to brag about Russia's resurgent military might, but when it comes to evacuating Russian citizens from Syria, he will likely need outside help, or just tell his countrymen to hunker down and wait until Assad meets his fate.

There are signs that Russian would like execute a big skedaddle (ulepetyvat) from Syria, but Moscow just doesn't have the air and sea assets to make that happen. Watch for Putin to ask the U.N. to organize a "humanitarian" evacuation from Russia, utilizing (mostly) western assets to get his citizens out of the war zone.
Posted by George Smiley at 11:06 PM

That's the biggest gator they've got? They're in a world of hurt.