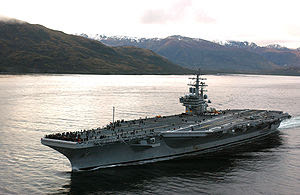 Shown here in a file photo, the USS Ronald Reagan will soon become the third U.S. aircraft carrier operating in waters off northeast Asia, along with the USS George Washington and the USS Carl Vinson. The presence of three carrier battle groups will give American commanders more options for dealing with the situation in North Korea (Wikipedia photo).
As we observed in a recent post, the coming months on the Korean Peninsula will be a particularly dangerous time. Not only is North Korea expected to ratchet up provocations against the South, there is a very good chance the Seoul government will respond in kind, launching counter-strikes on a scale previously unobserved in that volatile region.
Bottom line: the prospects for renewed conflict in Korea haven't been this high since the late 1960s, when DPRK forces shot down a U.S. EC-121 spy plane and seized the USS Pueblo, an intelligence-collection ship operating off the North Korean forces. We responded with a massive military build-up on the peninsula, but North Korea still held the Pueblo's crew for a year before they were finally released.
Five decades later, Pyongyang hasn't launched a similar provocation against U.S. forces (at least not yet). Still, the possibility of North Korea attacking our military assets in the region is much higher than in recent years, as Kim Jong-il's regime tries to transfer power to his youngest son, establish his credentials as the nation's next leader, and extract more concessions from the United States and South Korea.
It's a difficult geopolitical juggling act, but the future of North Korea literally hinges on accomplishment of those goals. So, the early weeks of 2011 will be especially tense in Northeast Asia, as Pyongyang makes its next move, dictating some sort of response from Washington, Seoul and Tokyo.
At this time of year, the DPRK is not without options. The annual Winter Training Cycle (WTC) of the North Korean military is in full swing, meaning that combat units will be nearing peak readiness over the next three months. That fact was reaffirmed today, with reports that Kim Jong-il personally observed a armored drill conducted by his army's 105th Guards Tank Division.
The North Korean news dispatch suggests that DPRK military training is on schedule, or even slightly ahead of schedule. Early drills in the WTC focus on small-unit operations, then move on to larger formations at the brigade and division levels. Corps-level exercises will come next, building towards a national defense exercise in late March.
It's unclear how many tanks from that division took part in today's training. In recent years, armored drills have been conducted on a slightly smaller scale, to save precious fuel and other resources. But with the "Dear Leader" in attendance, fuel savings were hardly a consideration. It's a safe bet that the division on display rolled out enough tanks to satisfy the dictator, who was reportedly "pleased" by what he saw.
Kim's presence at the exercise also raised some caution flags. In March of last year, he visited a naval base before a DPRK sub torpedoed (and sank) a South Korean corvette, killing 46 ROK sailors. And just last month, the North Korean leader and his heir apparent, Kim Jong-un, inspected a North Korean artillery just hours before it opened fire on South Korea's Yeonpyeong Island. Today's visit prompted suggestions that the 105th might be involved in some future provocation.
But that appears unlikely--at least for now. The 105th, one of the oldest armored units in the North Korean Army, is something of a "showcase" organization, and frequently visited by VIPs. In fact, Kim Jong-il inspected the division earlier this year. So today's visit may not be a harbinger of the next sneak attack.
Besides, there are more troubling scenarios on the horizon. There may be a new wrinkle in Pyongyang's plans for its next nuclear test. Reza Khalili, a former Iranian Revolutionary Guards officer (and CIA operative) believes North Korea is preparing to test a device for Iran. He made that claim in a column posted yesterday at FoxNews.com:

"A [recent] research report from the South Korean Foreign Ministry Institute indicated that North Korea would carry out another nuclear bomb test after the beginning of the year -- South Korean media reported earlier this month that the North was digging a tunnel in preparation for such a nuclear test.

At the same time, reports from inside Iran indicate that a team of Iranian nuclear scientists have been sent to North Korea and that the two governments have agreed on a joint nuclear test in North Korea with a substantial financial reward for the Kim Jong-Il government.

The recent revelations about North Korea’s uranium enrichment plant also raise the possibility that North Korea is enriching uranium on Iran's behalf. Iran has always maintained that its nuclear program is for peaceful purposes; that it is their right to produce nuclear fuel for their nuclear power plants.

In order to avoid a possible military reaction by the West, Iran is working covertly with North Korea until such a time they are capable of weaponizing their ballistic missiles with nuclear warheads.

If Mr. Khalili's information is accurate, we are facing an even greater crisis on the Korean Peninsula. The ramifications of a nuclear test--conducted by Pyongyang for its Iranian partners--are dangerously clear. While a recent computer virus (allegedly engineered by Israel) has crippled Tehran's nuclear program, the mullahs may be opting for a convenient back-up plan: acquiring a device from North Korea.

Assuming the test is successful, that means Iran could acquire a handful of nuclear devices in a matter of weeks, via regular military transport flights between Pyongyang and Tehran. It really doesn't matter if the bomb if of Iranian design, or simply acquired "off the shelf" from North Korea. Tehran may be on the verge of entering the nuclear club, and sooner rather than later.

The obvious question is what the U.S. and its allies are prepared to do about it. Attacking the test site might prove counter-productive, particularly if we "miss" the device and give North Korea an excuse for a large-scale military strike on the south.

A better option would be an air and naval quarantine of the DPRK, aimed at halting nuclear shipments to Iran. Enforcing such a ban is far from impossible, but it would take resolve, dedicated military resources, and the cooperation of sometimes-reluctant nations like China. It's worth remembering that some of those IL-76 flights between North Korea and Iran make refueling stops at airfields in the western PRC.

Denial of overflight and refueling privileges in China would go a long way towards halting the arms flights, forcing North Korea to rely on maritime shipments. We've had notable success in tracking (and even interdicting) those vessels in the past. These tactics will be even more effective if the U.S. quietly "buys up" space on third-party air cargo jets and merchant ships that could be hired to ferry nuclear technology between North Korea and Iran.

But the time for action is now. So far, the Obama Administration has given no public indication of how it would react to another nuclear test in North Korea, with or without Iranian participation. Still, there are signs the White House and the Pentagon are hedging their bets. Our friends at Information Dissemination were among the few to note the "early" surge of the USS Carl Vinson late last month. The Vinson and its battle group are currently operating near Guam, and could reach waters off Korean in a matter of days.

With the arrival of Vinson, the U.S. now has two carriers in the Western Pacific (the USS George Washington is home-ported in Japan and often operates in that area). While the presence of two carriers in the region is rare, you have to go back to the Vietnam War to find three carrier battle groups in the area at the same time. Yet, that will be the case in the coming weeks, when the USS Ronald Reagan deploys to Northeast Asia. The move has already drawn protests from China, and we're guessing Pyongyang is perturbed as well.

Too bad. With regional tensions at the highest levels in decades, the U.S. needs to enhance its military posture in the region. With the Washington, Vinson and the Reagan on station, U.S. commanders will have more than 150 additional fighter aircraft at their disposal. Those assets would be useful in conducting potential strikes against DPRK targets, protecting our recce assets over the Sea of Japan, or enforcing an aerial quarantine of North Korea.

As usual you see are spot on with the problems ongoing on the peninsula.
If the NKoreans actually successfully test do you think that can the current administration get the Chinese to deny overfly? I think that most people do not recognize the link between Iran and N. Korea, the next few months could be trying especially if their test works