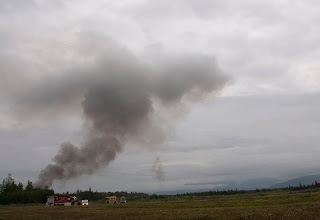 Smoke rises from the site where an Air Force C-17 transport crashed last summer near Elmendorf AFB, Alaska. An accident investigation board has concluded that pilot error, including "over-aggressiveness" and "over confidence" led to the accident that killed four crew members (AP photo)
The Air Force has released portions of the report on last summer's crash of a C-17 transport at Elmendorf AFB, Alaska--and it's not pretty.
According to investigators, the accident was the result of pilot error, specifically "over aggressive maneuvering and over confidence." Four crew members died in the mishap, which destroyed the $184 million airlifter. From the AP report on the accident board's findings, via Air Force Times:

Besides pilot error, the crew on board was also faulted for failing to notice the dangerous situation that culminated with the plane stalling and crashing into the woods July 28 at Joint Base Elmendorf-Richardson.

“The mishap pilot violated regulatory provisions and multiple flight manual procedures, placing the aircraft outside established flight parameters at an attitude and altitude where recovery was not possible,” the report’s executive summary says.

The probe “found clear and convincing evidence the cause of the mishap was pilot error,” the report says. It also found evidence that other factors including overconfidence and misplaced motivation contributed to the crash.

“Furthermore, the mishap co-pilot and mishap safety observer did not realize the developing dangerous situation and failed to make appropriate inputs.”

When the stall warning sounded, the co-pilot responded by saying “temperature, altitude lookin’ good,” according to the report.

Excerpts from the report were made public Friday afternoon by Pacific Air Forces (PACAF), headquartered at Hickam AFB, Hawaii. The C-17 and its combined active duty/National Guard flight crew were assigned to the 3rd Wing at Elmendorf, which is a part of PACAF.

Following long-standing service rules, the USAF did not release the entire report. The service refused to disclose which of the three pilots was at the controls when the C-17 went down. The Air Force identified the pilots assigned to the mission as Major Michael Freyholtz, 34, of Hines, Minnesota; Major Aaron Malone of Anchorage, Alaska and Captain Jeffrey Hill, 31, of York, Pennsylvania. The fourth crew member killed in the accident was the C-17 loadmaster, Senior Master Sergeant Thomas Cicardo, 47, of Anchorage.

The airlifter crew was rehearsing an air show performance at the time of the crash. According to the crash board (and video of the accident) the pilot made an aggressive right turn after the C-17's initial climb out and left-hand turn. The stall warning system activated as the aircraft made its final turn, but the pilot continued the maneuver. When he finally responded, the pilot employed incorrect recovery procedures and there wasn't enough time (or altitude) to regain controlled flight. The C-17 went down about a minute after takeoff, crashing in a wooded area near Elmendorf. No one on the ground was hurt.

For some Air Force members, the C-17 accident in Alaska brought back memories of another air show practice gone bad. Sixteen years ago, a B-52 crashed at Fairchild AFB, Washington, under similar circumstances. The heavy bomber went down while the crew was rehearsing an air show profile, killing four crew members. The crash board found that the pilot at the controls, Lieutenant Colonel Arthur "Bud" Holland not only exceeded safety limitations for the giant aircraft, he had a long history of unsafe flight.

Holland often bragged that his "career ambition" was to do a barrel roll in the B-52 and his antics resulted in some crew members refusing to fly with him. Amazingly, Holland was never sanctioned for safety violations and at the time of the 1994 crash, he was Chief of Standardization and Evaluation for the 92nd Bomb Wing at Fairchild. In that capacity, Holland was charged with ensuring that all B-52 crew members at the base could operate their aircraft in accordance with Air Force standards.

The safety board that investigated the Fairchild tragedy discovered that Holland had violated pitch, altitude and bank restrictions for the B-52 on at least six separate occasions before the fatal crash. Many of the incidents occurred during air shows and other public venues. More disturbingly, Holland briefed illegal flight profiles to wing leadership before those events. Senior officers corrected Lieutenant Colonel Holland during his briefings, but there is no evidence that anyone tried to discipline the rogue pilot, let alone ground him.

Sadly, one of the few officers that tried to stop Holland died in that B-52 crash. Lieutenant Colonel Mark McGeehan was the commander of the 325th Bombardment Squadron at Fairchild. After listening to complaints from other crew members, McGeehan flew with Holland and discovered he was unsafe in the air. McGeehan elevated his concerns to the operations group commander and wing commander, to no avail.

So, with Holland scheduled to pilot the B-52 for the 1994 air show--marking the end of "Buff" operations at Fairchild, McGeehan and his deputy, penciled themselves in as co-pilot and navigator for the final flight. The wing's retiring Vice-Commander, Colonel Robert Wolff, was added as a safety observer. Their aircraft, callsign Czar 52, crashed as the pilot (almost certainly Holland) tried to execute an extremely tight turn around the base control tower, at low altitude.

Over the years that followed, the Fairchild disaster became one of the most-studied accidents in the history of military aviation. Holland's recklessness in the cockpit became the stuff of legend--as did leadership's inability to stop him.

That's why the Elmendorf crash is so disconcerting. Air show routines are carefully planned and tightly scripted. Crews are hand-picked, and profiles are briefed up the chain of command well in advance. In fact, there are only a handful of "demo" pilots and crews within any command, so the men on board that C-17 were highly experienced, following a routine that had, in all likelihood, been flown on previous occasions.

So that raises some rather obvious issues: did the C-17 crew brief--and attempt to fly--a profile that was outside safety limitations for their aircraft? And, if that was the case, did anyone in the 3rd Wing, PACAF or Air Mobility Command chain attempt to correct the pilot and remind him of the parameters for the demo? Beyond that, was the crew following a profile flown by C-17 crews from other units? And, given the tragedy in Alaska, does that mean that other aviators were flying an approved "demo" that created unnecessary risks for the crews?

Unfortunately, we may never know the answers to those questions. Portions of the accident report dealing with those matters have not been released, and will probably never be made public. We can only hope the Air Force learns from this accident and takes those lessons to heart. Similarities between the Fairchild disaster in 1994 and last summer's C-17 crash are enough to raise eyebrows and make one wonder---was this a case of tragic history repeating itself?

Posted by George Smiley at 3:43 PM

This sure smells like a case of a golden boy getting in over his head. Possibly similar to the F-15 shoot down of the Blackhawk in Iraq a few years ago.

I think you need to be very careful about what you are insinuating in this situation; that is a giant leap to apply the Fairchild situation to this particular accident. It doesn't mean that there are not similarities, but that is a big step to equate the two.

@Jim Howard - you mean the shoot from over 15 years ago? Other than both incidents involved pilots, aircraft and loss of life, there isn't any other similarity.

Just another wanna-be fighter pilot who doesn't understand the difference between fighters and heavies.

@ storm 24
Get the meanings between the lines . then you get the point of Jim