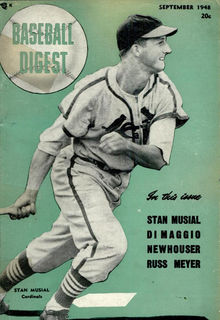 Stan Musial on the cover of Baseball Digest in 1948 (Wikipedia photo).

I remember him well in particular for his closed batting stance which I tried but never could make work. But I remember him best coming to the plate in a game against the Dodgers at Ebbets Field with the bases loaded. I was torn between my Dodgers and my favorite player. Of course I thought grand slam. And he did.