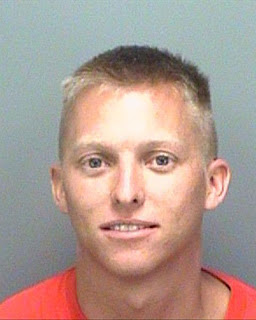 It's been quite a while since we bestowed one of these prizes, but not due a lack of qualified candidates. Indeed, we could give it to Joe (Gaffe-o-Matic) Biden and retire the award once and for all, but that would deny future generations of worthy recipients.
With that in mind, we are proud to announce our latest choice for Idiot of the Week: Senior Airman Derek Martin of the 6th Security Forces Squadron at MacDill AFB, Florida. Or maybe we should say "Soon-to-be-former Senior Airman," since Martin's days in the Air Force are likely numbered. As Air Force Times explains:
Authorities say a MacDill airman approached a woman, told her he was a CIA officer and said he was looking for a terrorism suspect. But Senior Airman Derek Martin is no James Bond.
Martin, 23, is an installation entry controller with 6th Security Forces Squadron. And he now faces charges of impersonating an officer and openly carrying a firearm.
Police say Martin approached a 55-year-old woman on Sunday night at Clearwater Beach, Fla., and identified himself as a CIA agent. He carried a 9mm handgun in a holster and flashed a badge identifying him as “CIA U.S. Special Agent #767.”
He told the woman he was looking for another woman involved in terrorist activities, police say. (Editor's note: what are the odds that the "other woman" is Martin's former girlfriend, or someone he's currently pursuing?)
As you might have guessed, Martin has no affiliation with the CIA, or any other counter-terrorism or intelligence agency. As an entry controller, Martin's duties usually consisted of checking cars and drivers as they entered MacDill.
Maybe all those hours in the hot Florida sun baked his brain. But, judging by that goofy smile in his mug shot, we're guessing that Martin may be a taco shy of the proverbial combination plate.
Which raises another question. If "CIA U.S. Special Agent #767," a.k.a. Airman Martin is a little imbalanced, why in the world did the Air Force give him a badge? And a gun.
Posted by Unknown at 7:11 PM