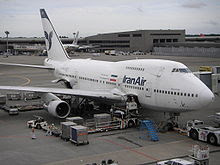 An Iran Air Boeing 747SP at Narita Airport in Japan. The airline operates the same type of aircraft on bi-monthly flights between Tehran and Caracas, Venezuela--flights believed to serve as a conduit for intelligence agents and Hizballah operatives entering the western hemisphere (Wikipedia photo).

Suppose you're that rare international traveler who needs to fly between Tehran and Caracas. Instead of connecting between two or three cities on multiple airlines--with interminable layovers--why not fly nonstop?
You won't find it on Travelocity--or any of the other internet travel sites--but Iran Air, the Islamic state's official carrier, could seemingly meet your needs. Iran Air offers monthly bi-monthly service between Tehran and the Venezuelan capital, but don't try booking a seat. While travel agents can "see" the flight in their system, the Iranian carrier isn't accepting reservations. You see, Flight 744 is apparently reserved for members of Iran's Revolutionary Guards Corps (IRGC), intelligence agents and Hizballah operatives.
According to reporter J.J. Green of WTOP Radio in Washington, the Iran Air flight has been on the radar scope of western intelligence agencies since it began three years ago. But so far, they've learned little about who's onboard the flight and what cargo might be carried on the Boeing 747. But one thing is clear: the jet receives very "special treatment" when it arrives in Caracas:
"My understanding is that this flight not only goes from Caracas to Damascus to Tehran perhaps twice a month, but it also occasionally makes stops in Lebanon as well, and the passengers on that flight are not processed through normal Venezuelan immigrations or customs. They are processed separately when they come into the country," says Peter Brookes, senior fellow for National Security Affairs at the Heritage Foundation.
The 16-hour flight typically leaves Tehran and stops at Damascus International Airport (DAM), which is Syria's busiest. In 2009, almost 4.5 million passengers used the airport.
After a 90-minute layover, the flight continues the remaining 14 hours to Venezuela's Caracas Maiquetía International Airport (CCS). Upon arrival, the plane is met by special Venezuelan forces and sequestered from other arrivals.
"It says that something secretive or clandestine is going on that they don't want the international community to know about," says Brookes, a former deputy assistant defense secretary for Asian and Pacific Affairs and CIA employee.
Given its routing and handling, there are legitimate concerns that Flight 744 is being used to funnel intelligence operatives, terrorists and other clandestine personnel into the Western Hemisphere. On its return flight, the Iran Air jet could be transporting uranium for Tehran's nuclear program, or equipment associated with that effort. By routing those materials through Caracas, Iran could evade U.S.-imposed sanctions.
But those passengers arriving in Venezuela represent an equal concern. Security officials have long feared that the Tehran-to-Caracas flight could be the first step on a journey that (eventually) brings Iranian and Hizballah agents into the U.S., via our porous southern border.
Former investigative reporter Todd Bensman was one of the first to highlight this potential connection three years ago. In a ground-breaking series for the San Antonio Express-News, Mr. Bensman exposed the flow of illegals from nations that sponsor terrorism. While the Iran Air flights weren't mentioned in the articles (they had begun only three months before the series was published), the implication was clear. If "ordinary" refugees could bribe or sneak their way into the United States, terrorist groups--or hostile governments--could easily do the same.
Mr. Bensman also discovered a growing Iranian presence in Nicaragua, where Tehran enjoys cordial relations with Daniel Ortega and the Sandinista government. Iran has built an over-sized embassy in Managua, a facility that could be used to support intelligence and terrorist operations in Latin America and the United States. Bensman's report of Tehran's expanding interests in Nicaragua ran in December 2007, about six months after the series on illegal immigrants from terrorist-supporting countries.
As we noted in a recent post, Todd Bensman quit his job with the Express-News to become a government intelligence analyst. In that capacity, we assume, he knows even more about those flights between Tehran and Caracas, and their connection to other Iranian activities in this hemisphere. Unfortunately, he's no longer in a position to share his knowledge with the general public.
But the reporting of Mr. Bensman and J.J. Green provides an important reminder: Tehran's efforts to establish a base of operations in the Americas has been on-going for sometime. And, as former CIA Director Michael Hayden told Mr. Green, the U.S. government "isn't doing enough" to keep tabs on Iranian operations south of the border.
With personnel and resources in place, Tehran would be in a position to launch terror attacks against the United States (or American targets in Latin America), in response to a strike against its nuclear facilities. And, judging by those frequent flights to Caracas, Iranian capabilities in Central and South America are improving steadily. Unfortunately, the State Department seems officially indifferent to Iran and its operations in our hemisphere. Contacted by J.J. Green of WTOP, a department spokesman said that "nations have the right to enter cooperative agreements with other nations."
In case you're wondering, the next Iran Air flight between Tehran and Caracas is scheduled to depart on Friday.
Posted by George Smiley at 8:53 PM

The recent car bombing in Bogota's CBD has all the earmarks of Middle East meddling.

How about a follow-up piece on that 'mysterious' island that Chavez has given over to Hezbollah?

Not to mention that 'industrial complex' in the middle of nowhere.

Given the poor reliability of aircraft in the hands of the Iranians due to a lack of maintenance, it would not be beyond the pale for one of these flights to mysteriously disappear over the Atlantic.