The Dimmest Bulb on the Hill 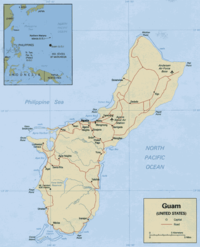 A map of Guam. Georgia Congressman Hank Johnson will be relieved to learn that the island is in no danger of capsizing, even if more military personnel are stationed there (Wikipedia map).

Residents of Georgia's 4th Congressional District must be sooo proud.
For years, they were represented by Cynthia McKinney, once described by The Talkmaster as the "Cutest Little Communist in Congress." During her tenure in the House of Representatives, Ms. McKinney became known as (perhaps) the kookiest member of the Democratic lunatic-kook-fringe.
She was among the first to sign on with the 9-11 "Truth Movement," claiming that President Bush had prior knowledge of the terrorist attacks in New York and Washington, D.C. McKinney also established herself as an ardent foe of Israel, criticizing its human rights record while lavishing praise on Yasser Arafat's Palestinian Authority. Congresswoman McKinney also introduced a bill demanding the release of all documents relating to the muder of rapper Tupac Suakur, claiming "the public has a right to know, because he was a well-known figure."
But even voters in the Fourth District eventually tired of Ms. McKinney's antics. She lost a primary fight in 2002, before winning a final term in 2004. But she was voted out again in 2006, after a highly-publicized scuffle with a Capitol Hill police officer. At last report, McKinney had decamped for the friendly confines of the left coast, where she is a Ph.D student at Berkeley.
The man who now represents the Fourth District (Hank Johnson) has been less controversial than his predecessor, but there's no evidence he's any smarter than Cynthia McKinney. Last Thursday, Mr. Johnson may have set a new standard for cluelessness, even by the low standards of the U.S. Congress. Participating in a House Armed Services Committee Hearing on Guam's growing military population, Congressman Johnson suggested if more troops and hardware are placed on the island, it might "tip over and capsize." To emphasize that possibility, he made a tipping motion while he spoke. As The Hill describes it:
Addressing Adm. Robert Willard, who commands the Navy's Pacific Fleet, Johnson made a tippy motion with his hands and said sternly, "My fear is that the whole island will become so overly populated that it will tip over and capsize."
Willard paused and said: "We don't anticipate that."
Like other islands, Guam is attached to the sea floor, which makes it extremely unlikely that it will tip over, even if there are lots and lots of people on it.
Guam is 30 miles long and up to 9 miles wide in certain spots, with a population of 175,000 civilians. The military is proposing the addition of 8,000 U.S. servicemembers and their families.
Reached for comment, a spokesman for Johnson said the lawmaker had visited Guam, and his concern was that the influx of military personnel would overwhelm the island's infrastructure and ecosystem.
But if you watch the embedded clip in The Hill's blog post, it appears that Mr. Johnson was quite serious. Admiral Willard probably deserves a gold star (or something) for suppressing the urge to smile, laugh--or both--as the Representative makes a fool of himself.
Congress: it's show-business for the ugly. Or the terminally stupid. And that makes us wonder about the good folks of the Fourth District. For almost 20 years, you've sent a raving loon (Cynthia McKinney) to Congress, followed by someone that is (apparently) unaware that islands are anchored to the ocean floor and there's no danger of them "capsizing," even if you added thousands of additional people to the local population.
Is it something in the water down there, or merely a reflection on the wonderful "government schools" in Georgia's Fourth Congressional District.
Posted by Unknown at 2:50 PM

I'd like to believe an Obamanite is that stupid, but see this:
http://neoneocon.com/2010/04/01/in-defense-of-hank-johnson/
I also noticed watching the video that at one point he looked away starting to smile, like he couldn't keep it up.

Dwight Eisenhower joked that there were so many Americans in Britain before D-Day that the only things preventing us from sinking were the fleets of barrage balloons moored around our towns and cities.

We, as a nation, are clearly too stupid for democracy. The scariest part is that Johnson is not the singular example and the others in Congress don't seem the slightest bothered by his ignorance.