The Next Chapter in Space 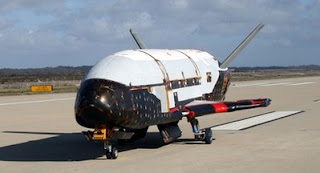 The Air Force X-37 Orbital Test Vehicle (OTV), on the runway at Edwards AFB, California. Placed into orbit Thursday evening by an Atlas rocket, the X-37 and its mission have been shrouded in secrecy (Wikipedia photo).

The Air Force's X-37 orbital test vehicle (OTV) blasted into space tonight, atop an Atlas rocket. While the platform--and its mission--remain shrouded in secrecy, the service says the X-37 will serve as an "on orbit" demonstration of space vehicle technologies, and pioneer reusable spaceflight operations.
As Aviation Week reports, the program has evolved in recent years:
Originally a NASA program, the X-37B’s exact mission has been increasingly cloaked in secrecy since it was taken over by the Air Force, which initially worked the program in conjunction with the Air Force Research Laboratory and Defense Advanced Research Projects Agency (Darpa). The 29-ft.-long, 15-ft.-wingspan vehicle resembles a small space shuttle in overall form, and was designed to test human spaceflight technologies under NASA before transitioning to Darpa in 2004.
While the vehicle can remain in orbit for up to 270 days, the first mission is expected to be much shorter. Future flights will be longer in duration, and focus on the testing of spacecraft technology and orbital payloads that will be deployed by the OTV.
The Air Force has also remained mum on the subject of payloads, but some analysts believe the orbiter will be used--on some missions--to deploy small intelligence satellites. Various countries (including the U.S.) have been experimenting with micro-satellite technology for several years. Israel is reportedly spending hundreds of millions of dollars on small intelligence satellites, to complement its existing complement of three overhead collection platforms.
Deployed by an orbital vehicle or a booster rocket, the miniature satellites fly in lower earth orbit (typically 300 kilometers above the earth), in contrast to larger birds, which operate at altitudes over 600-700 km. While the small satellites have less powerful optics, their lower orbits still allow for good resolution of ground targets.
The payload bay of the OTV is small (only 7' by 4' when it was a NASA project), so there isn't much room to spare. There is some speculation that Boeing engineers have enlarged that section of the craft, but even the original bay would be adequate for a small intelligence platform. Israel defense contractor Rafael is working on spy satellite that weighs less than 70 pounds and U.S. has experimented with micro-satellites measuring 20 x 18 inches (roughly the size of a 13-inch TV), and weighing 55 pounds when fully fueled.
Along with increased coverage, miniature spy satellites offer other advantages. They are stealthier, and more difficult to detect. And, with the OTV able to remain on orbit for months at a time, the micro-satellites can be deployed at optimum times to monitor enemy activity that (might otherwise) go undetected. As we've noted in previous posts, virtually all of our adversaries have satellite warning programs, but those are based on larger platforms, launched by large booster rockets flying familiar profiles. Use of the OTV will make the deployment profile less predictable, and complicate enemy deception efforts.
The Air Force's cryptic comments on the X-37's mission suggest it may be a while before the space vehicle deploys an operational payload. But that timeline may be shorter than advertised. Micro-satellite technology is advancing rapidly, but so are adversary WMD programs and the deception efforts that shield them. The U.S. needs more coverage--and as quickly as possible. That's why the X-37 may be operational sooner, rather than later.
Posted by Unknown at 10:11 PM

And the NIRTS Sat concept from the various Dale Brown techno-thrillers comes to pass some 20 years after he first wrote about it.

When will the Army get the Tin Man?

Spook86-
Thanks for the insight and information...very interesting. I had been wondering about what was going on with the OTV. Now I have at least some idea.

Two minor asides, you described a 3 dimensional object with 2 dimensions (the payload bay). Also, "They are stealthier, and more difficult to detect." Really? Both? Did you learn that from the Department of Redundancy Department?

Sorry about being so picky. BTW, does "anal-retentive" have a hyphen? I have a need to know.

Regarding anal-retentive and the hyphen. When anal-retentive is used with the symbol that is normally referred to as a hyphen, it becomes a sphincter; otherwise, it would not be retentive. And yes, the use of the semi-colon and not the full colon was proper here.

There are communications and photo reconnaissance that are 10cm cubes and weigh less than a couple of kilos. The OTV could launch dozens of these on a single mission.