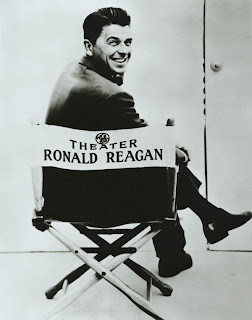 The Gipper as host of General Electric Theater in the 1950s. To honor the 100th anniversary of his birth, GE has donated $15 million to the Ronald Reagan Presidential Foundation (GE Photo)

A few weeks ago, I was stunned to see (and hear) television and radio ads from General Electric honoring....Ronald Reagan.
Sure, Mr. Reagan was a corporate spokesman for GE in the 1950s and early 60s, but things have changed dramatically in the company's executive suite over the past 50 years. After all, GE and its corporate leaders were early supporters of Most Things Obama, including Cap-and-Trade Legislation and health care "reform." Readers will also recall that senior GE executives actually convened a meeting with journalists at one of its former media properties (CNBC) to determine if the business network was being "too critical" of the administration and its policies.
But GE is donating $15 million to serve as a "presenting corporate sponsor" of the Reagan Centennial, which is being observed this year. In today's edition of The Wall Street Journal, columnist John Fund notes the apparent contradiction between GE's current policies and its sizable gift to the Reagan celebration. Mr. Fund believes that GE management has reached the conclusion that Ronald Reagan now "transcends" mere politics and should be honored as a great historical figure.
There may be a touch of reverence in GE's gesture, but we also see an element of cynicism. The company has lost much of its luster since the departure of legendary CEO Jack Welch in 2001. Even when you factor in a three-for-one stock split in 2000, GE shares are down more than 60% over the past decade. A share of the company's stock was trading at just over $18.00 this morning, compared to $48.00 a share back in 2001. And, the company's eager embrace of Mr. Obama's initiatives hasn't enhanced the bottom line, either.
In fact, you can make a case that GE is (at best) trying to tack back to the right, recognizing that America is a center-right nation, and that conservatives stand to make big gains in the mid-term elections. At worst, General Electric is employing a tactic used by many corporations, trying to cover all the political bases, and positioning itself for future changes in the political winds.
If the GOP stands to regains control of Congress and/or the White House in the next two years, GE doesn't want to find itself on the outside, looking in. So, why not donate $15 million to update the Reagan Library, fund a new scholars program and sponsor a new theater (at the library complex) that will celebrate the former president's career in radio, films and TV.
As John Fund notes in his column, Reagan's stint at GE marked a turning point in his conversion from liberalism to conservatism, describing it as a "post-graduate course" in political science. Appearing at hundreds of General Electric plants across America, Mr. Reagan wrote his own speeches, many devoted to such timeless themes as free enterprise and the dangers of government intrusion in the private sector. According to Mr. Fund, Time columnist Hugh Sidey was surprised to learn that some of Reagan's most effective speeches in the White House were little more than updates of the talks he gave to GE workers 30 years earlier.
It's also worth remembering that Reagan's presentations for General Electric were consistent with the company's values during that era. Reagan was part of a corporate communications plan that stressed the benefits of economic freedom, and encouraged workers to read free-market publications, from the WSJ to Bill Buckley's then-fledgling National Review.
To be fair, GE deserves credit for honoring Ronald Reagan on the centennial of his birth--and making a substantial gift to his presidential foundation. We can only hope the company spends some of its contribution on an executive field trip to Simi Valley and a visit to the Reagan Library. The current management team at GE could learn a lot from the "actor" who once served as their corporate pitchman.

My guess is that O'Reilly's criticism of MSNBC and GE prompted this campaign.

My impression is the ads appear more on FoxNews than elsewhere. But I seldom watch elsewhere so I could be wrong.