The Beast of Kandahar 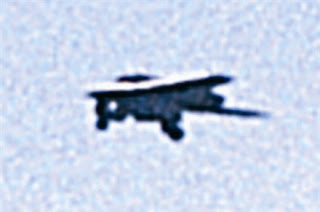 The so-called "Beast of Kandahar," a mysterious UAV that was recently photographed in the skies over Afghanistan. The aircraft bears a striking resemblance to the failed "Polecat" UAV, developed several years ago by Lockheed's Skunk Works (photo courtesy of Air & Cosmos, via Aviation Week).

Aviation circles have been buzzing over a mysterious UAV, recently photographed near the allied airfield at Kandahar, Afghanistan.
A French magazine, Air & Cosmos, was apparently the first to publish to picture of the aircraft earlier this year. The photo quality isn't particularly good, but even untrained eyes can recognize that the UAV isn't a Predator, Reaper or Global Hawk, types often seen over Afghanistan and Iraq.
So what is the mystery aircraft? The folks at Aviation Week have noted a similarity between the "Beast of Kandahar" and Lockheed's "Polecat" demonstrator, which was (supposedly) cancelled after a crash in 2006. But the sighting in Kandahar suggests that Polecat--or elements of the design--are living on, in a stealthy UAV that is either operational, or undergoing flight testing in a combat theater.
Of course, that raises another question. Exactly what is the UAV's mission in Afghanistan? The Taliban and Al Qaida don't have radars or an integrated air defense system (IADS), so there's no real requirement for a stealthy drone in that campaign. On the other hand, a very low-observable, high endurance UAV would be ideally-suited for keeping tabs on nuclear facilities in neighboring Iran or Pakistan.
The picture below is that of a Polecat during a test flight. No one is saying that the UAV sighted at Kandahar is the same one built by the Skunk Works earlier this decade. But the two aircraft do appear to share a common lineage. If nothing else, as Aviation Week observes, the drones came from the same litter. 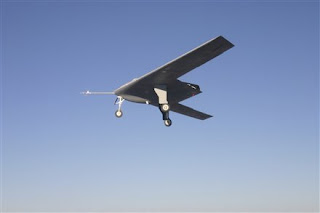 Polecat UAV (Aviation Week photo)
Posted by Unknown at 11:08 AM

Dude, that is SO cool.

I wonder if an Iranian wunderkind happened across plans in the Pentagon trash? While matching materials might be beyond Iranian manufacturing skills at present, there is utility in simply copying the shape.

For that matter, it's not utterly beyond Pakistan or India's arms manufacturers...

Maybe we're using it to collect overhead near (or in?) Iran, where an IADS exists and the detection of an unauthorized UAV could be a serious problem.

Is that it pictured in Darpa's network operations? (middle left)

Could possibly lend credence to JR's theory about snooping on Iranian assets?

Bomb the effen Taliban back to the stoneage where they belong.

These little surprises are what keeps the Iranians and Osama looking over their shoulders at night and sleeping deep in the earth (should they be alive). Keep them coming and scare them with even bigger and better boogies! It may be all that keeps us safe in our beds.

To Hubbard. You are an idiot. It's a stealth reconnaissance vehicle. It has no weapons. It is strictly for observing only.
http://news.yahoo.com/s/afp/20091208/pl_afp/usaviationmilitarydrones_20091208212912
Is my proof.

I'm and aero engr-ing student and I know it takes way more than just copying the aircrafts shape to achieve stealth hahaha. But I hope that's what other countries try cuz it would be so funny how behind the times they are hahaha! My personal opinion, it keeps an eye on those pesky nuke sites. I think the government knows every brick the damn Iranians lay! lol

I'm an aero engr student but I know it takes more than just copying the shape when it comes to stealth hahaha. I hope that's what they do! It would be a big laugh when they try, fail, and then up on youtube's collegehumor or something hahaha. My personal opinion....it keeps an eye on those pesky nuke sites. I think the gov knows every damn brick Amadeinawhatever lays!