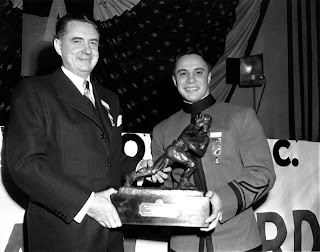 
One of the legendary players of college football has died.

Felix "Doc" Blanchard, the punishing inside runner for Army teams that went undefeated from 1944-46, passed away Sunday in Bulverde, Texas. He was 84.

As the Associated Press recounts:

Notre Dame coach Ed McKeever was quoted as saying about Blanchard in 1944: “I’ve just seen Superman in the flesh. He wears No. 35 and goes by the name of Blanchard.”

The year after Blanchard became the first junior to win the Heisman Trophy, Davis won it and Army went undefeated again.

In 1944, after a famous season-ending win over Navy, Gen. Douglas MacArthur even took time out from his war duties to send this wire: “The greatest of all Army teams. ... We have stopped the war to celebrate your magnificent success. MacArthur.”

Blanchard, who also played linebacker and handled place-kicking and punting for Army, capped his Heisman Trophy season by scoring three touchdowns in a 32-13 victory against Navy, and he became the first football player to win the Sullivan Award, given to the nation’s top amateur athlete.

But many football fans are unaware of Blanchard's other achievements--as an Air Force fighter pilot. Sixty years ago, a West Point graduate was (usually) expected to fulfill his service commitment; Doc Blanchard spent 25 years in uniform before retiring, as a Colonel, in 1971.

Along the way, Blanchard served combat tours in Korea and Vietnam, and was cited for a flawless emergency landing at a base in England, despite an engine fire. In his typical, self-deprecating manner, Blanchard said he opted for the landing because he was afraid his parachute wouldn't open.

On the football field, Doc Blanchard's exploits were the stuff of lore. Just over six feet tall and weighing 210 pounds, the West Point star had the speed of a tailback, but the power of a fullback, his natural position. Along with halfback Glenn Davis ("Mr. Outside), Blanchard formed one of the greatest backfields in college football history. Davis won the Heisman Trophy in 1946, one year after Blanchard. Ironically, Davis spent only three years in uniform before a brief professional career with the Los Angeles Rams.

Living quietly in Texas after retirement, Colonel Blanchard never sought the limelight, and regrettably, he was largely forgotten by both the sports world, the military and even his hometown. Blanchard was raised in Bishopville, South Carolina (and is, arguably, its most famous native son), but the town didn't get around to planning a monument for him until 2002.

Better late than never, we suppose.