Barely three months into the job, Edwin Caldera's stint as Chief of the White House Military Office may be coming to an end. Or so you might think.

Mr. Caldera is taking heat for today's ill-advised fly-by over New York City. Apparently, someone on Caldera's staff thought it would be a fine idea snap a few pictures of Air Force One, as it flew over the Statue of Liberty.

Nothing wrong with that; do a web search and you can find various shots of the presidential jet flying past national landmarks, including this one at Mount Rushmore: 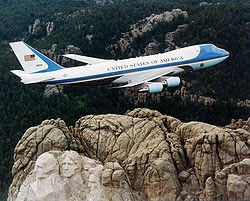 Following the template for such operations, the USAF--and the White House Military Office--coordinated their plans with the FAA, which voiced no objections. So, at the appointed time this morning, one of the Boeing 747s that serves as Air Force One appeared over lower Manhattan, flying at low altitude and escorted by a pair of F-16s.

Unfortunately, someone forgot to tell New Yorkers. The sight of he low-flying jetliner, trailed by fighter aircraft, brought back memories of 9-11 and touched off a momentary panic. Emergency centers were flooded with calls from angry citizens.

New York Mayor Mike Bloomberg was upset too, claiming that he had never been informed about the planned fly-by. However, the White House claimed that Bloomberg's staff was briefed on the operation last week. Apparently, the mayor was out of the loop, and the message clearly didn't reach panic-stricken citizens of New York City and northern New Jersey.

Making matters worse, some officials--and members of the press--are questioning the cost of the operation. The Air Force doesn't like to discuss flight-related expenses, but large aircraft--like a 747--typically cost several thousand dollars an hour to operate. Flight costs for an F-16 are lower, but they're anything but cheap. The price tag for today's little boondoggle will be in the five-figure range.

Fixing today's public relations debacle? That will be far more complex--and expensive. The real question is who gets fired over this one. Caldera would be a logical candidate, but he's a well-connected Democrat who served in the Clinton Administration. Because of that, we're guessing that someone else will get the axe, probably an obscure Air Force Colonel who was somehow connected to the fly-by.

There is a whole lot of ego and incompetence manifest in this incident. Careful reading of the coverage on this shows a lot of things:

1.) The coordination with city, county and state agencies was extensive.
2.) The Bloomberg administration screwed the pooch with regard to handling the notifications.
3.) The Bloomberg bunch has quite successfully shifted the blame away from themselves and onto the White House.
4.) The White House folks, starting with Press Sec. Gibbs bungled the response.
5.) Even within the NYC bureaucracy, the folks who were informed and should have been able to short-stop the "panic" couldn't shoot straight.
6.) And, most important of all, the constant campaign mode of the Obama administration has shown again that is all about the packaging and not about the substance.

But, you are right, some functionaries in uniform will be flushed down the tubes.

From what I read, the people were not informed (via media or otherwise) because someone (FAA or higher) had tagged the operation Classified.

I agree with Ed on this..

But I also look at the White House and just hope its only four years.. because of stunts like this.

Buy runescape gold as low Pirce! We never rest so that we can offer you the best. We're here 24 hours a day, 7 days a week. Get the most out of your game time and level with the best!

I've seen some very convincing arguments that Barry had nothing to do with this; that it was done by one of his underlings.

What does it say about Barry that it is so easy to believe that he WAS behind it all?

However you parse it, what goes around comes around.

Just seems to be more evidence that the current administration is incredibly naive or incompetent.

As to the idea that administration officials wanted the whole project "kept quiet" or classified, my question would be, "Why in the heck is that necessary?" They'll make public the president's schedule to speak at a college graduation but need to classify the photo-op session of the president's plane?