When President-elect Barack Obama visited a Marine base in Hawaii a few days ago, observers described his reception as "polite, but cool." ABC's Sunlen Miller was among the reporters who covered the event:

“Just wanted to say hi, hey guys,” Obama said as he walked into the Anderson dining hall which was decked out in Christmas decorations.

The diners represented seven military units -- Marine and Navy -- some of whom were joined by their families for Christmas dinner.

As Obama entered the room, it was absent of the regular fanfare of cheering and clapping. The diners were polite, staying seated at their respective tables and waited for the president-elect to come to them to stand up.

Obama didn't eat his holiday dinner at the base. A Navy officer who was present described the event as a "photo op," although (in fairness), plenty of politicians, from both sides of the aisle, have used the military as a convenient backdrop. There's no reason that Mr. Obama should be any different than the commanders-in-chief who came before him.

But the reception at that Marine dining facility underscores another reality for the incoming president. Many members of the armed forces remain wary of him and the policies he has vowed to implement. A new Military Times poll finds 60% of military personnel are "uncertain" or "pessimistic" about the president-elect. By comparison, only a third described themselves as "optimistic" about Mr. Obama. 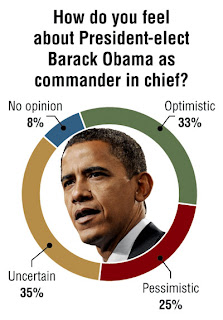 
A majority of respondents also said they disapprove of Obama's stated plan to withdraw U.S. troops from Iraq in 16 months. And by a wider margin--60%--they disagree with with his calls to end the "Don't Ask, Don't Tell" policy on gays in the military. However, almost three-quarters of those surveyed said they would continue with their military careers, even if Mr. Obama allows gays to serve openly. Twenty-three percent said they would leave the military or consider it if the policy is changed.

In follow-up interviews conducted by Military Times, some participants expressed serious concerns about their new commander-in-chief, and his stated policy goals:

“Being that the Marine Corps can be sent anywhere in the world with the snap of his fingers, nobody has confidence in this guy as commander in chief,” said one lance corporal who asked not to be identified.

How are you going to safely pull combat troops out of Iraq?” said Air Force 1st Lt. Rachel Kleinpeter, an intelligence officer with the 100th Operations Support Squadron at RAF Mildenhall, England. “And if you’re pulling out combat troops, who are you leaving to help support what’s left? What happens if Iraq falls back into chaos? Are we going to be there in five years doing the same thing over again?”

The findings are part of the Times' annual survey of military personnel. While the mail-in poll isn't considered scientific, it does offer one of the few opinion snapshots of the armed forces. The paper cautions that the survey--which is based on its subscriber list--under-represents minorities, junior enlisted members and female personnel. But is is considered a reliable barometer of "career" military members, officers and enlisted personnel who have logged multiple tours, and plan to serve until retirement.

If the survey has any good news for the Obama team, it is reflected in its timing. The incoming president has years to improve his standing among military members and the visit to that Marine base represents a tentative start. Rejecting a hasty retreat from Iraq--a position that Mr. Obama seems to be embracing--would be a good start, along with staying the course in Afghanistan. The new commander-in-chief also needs to get behind increases in pay and benefits for military members.

Still, the incoming president faces an uphill battle in winning the support of the troops. Military personnel, who voted for Republican John McCain by more than a 3-1 margin, are rightfully wary of an unabashed liberal in the Oval Office.

He also suffers because of "brand identification." Members of the armed forces are leery of Democrats, who cut defense programs the last time they controlled the White House. With many of the same, Clinton-era officials now poised to serve in an Obama Administration, they have every right to be suspicious.

Suprise! The military doesn't trust the socialist! Why should they?

Now, if we could only apply admission standards to the voting booth equivalent to the enlistment office, we could maybe make this pesky, emotional, democracy thing work.

Give me an electorate that can read, write, assume responsibility, maintain a standard of honesty and hygiene, and has been downtown to see the elephant...there might then be hope for the future.

Obama is attempting to make peace with the military. The last thing he needs in this troubled world is to have hordes of troops not renew their enlistments and officers resign their commissions.

Obama's idiocy in supporting a withdrawal from Iraq with no concern about the consequences has the potential of stirring a mass exodus. People follow leaders who have the will to win. They don't follow those who will use them for cannon fodder.

This is the real reason he kept Gates and the reason he probably won't mess with "don't ask, dont tell."

Bush put winning ahead of polls and personal popularity and has won the war in Iraq because of it. It is now Obama's to lose.

Well again. I will wear my asbestos underware.

I said that I was glad to have George Bush's signature on my Presidential Appreciation Certificate when I reetired rather than Hillary Clinton's. (Thats when all the press were saying that she was the shoe-in for the Democratic nomination and the presidency) Now I am sure glad I did not have to have Obama's name on it.

Those serviceman and women were correct in not going nutts for the president elect.. He is only elected and has yet to reach office as commander in chief... that happens when he dose the oath for his office.

But after what he has stated that's in store for the services when he is elected while campaigning.. one time talking about cuts, and the next talking about "re-vitalizing" the military.. is it any wonder the troops are wary of him?

Ed has a point of about the electorate needs to wake up a little bit.. and Corky has a point that Obama needs maintain at least a tact good will with the troops.

I myself saw MANY outstanding people leave the USAF duing the Clinton era where downsizing was the key thing.. and it showed.. but some of that was individual choice.. I wonder if the same will happen under Obama..

I would like to respectfully point out that the SOFA represents the closest thing to mutual agreement between the U.S. and Iraq governments that exists, and it calls for withdrawal by a certain date.

There's no doubt that there is valuable knowledge amongst the readers of the _Military Times_, but you can't ignore the will of the Iraqi people.

We have become fathers and mothers to a new nation, and it's growing up. You can't treat it like a child forever, and the voices of the nation have spoken. We have nursed the nation of Iraq dearly and costly, and respecting the wishes of the nation is the least we can--nay should--do as leaders of the free world and prophets of democracy.