Last of the "Boys" 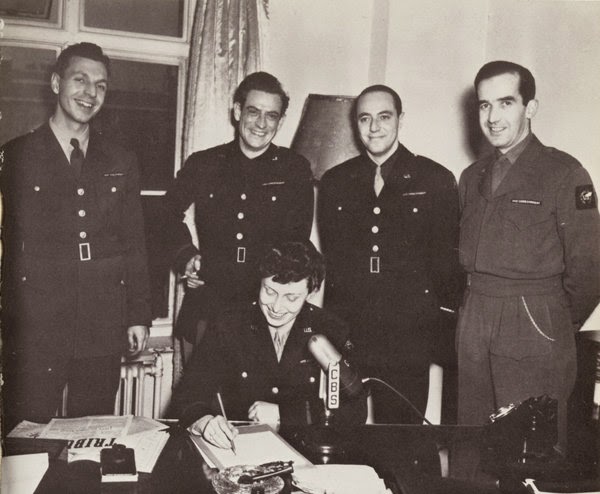 Present at the birth of broadcast journalism: Richard C. Hottelet (far left) at CBS's wartime offices in London, 1944.  He was joined by Charles Shaw, Larry LeSeur and Edward R. Murrow.  Mr. Murrow's wife, Janet, is seated at the desk (CBS photo via The New York Times)


Richard C. Hottelet died Wednesday, and with his passing we lost one of the last links to the early, pioneering days of broadcast journalism.

Mr. Hottelet was one of "Murrow's boys," the team of CBS radio correspondents hired by the broadcasting legend.  Collectively, they literally invented broadcast news during the late 1930s and World War II.  They reported from every battle front and created the standard for the generations of radio and TV reporters that followed.

Ed Murrow set the bar very high; he originally envisioned CBS news reporters as "scholar-correspondents," with the depth and knowledge to cover global stories completely and accurately.  Two (Howard K. Smith and Charles Collingwood) were Rhodes Scholars; most were well-educated and many worked for wire services or print outlets in Europe during the run-up to the Second World War; it was excellent preparation for the assignments that followed at CBS.

But Murrow also demanded that his reporters cultivate a certain look.  Years later, he told Mr. Collingwood that he almost didn't hire him because the prospective correspondent wore a "God-awful" pair of argyle socks to the job interview.   Murrow believed that his reporters should look the part, and Mr. Hottelet fit the bill; tall, handsome, with a broadcaster's voice and a winning smile.

But, as Stanley Cloud and Lynne Olsen wrote in Murrow's Boys (1996), Hottelet was also an aggressive reporter; working for United Press in Berlin before the U.S. entry into World War II, he questioned Nazi officials who were loading Jews onto trucks for the concentration camps.  His activities angered the Gestapo, who arrested him on espionage charges.  He spent four months in a German prison before being released in a prisoner exchange.

After a stint with the Office of War Information (OWI), Hottelet was hired by Murrow in 1944.  Over the next year, he provided one of the first eyewitness accounts of D-Day, flying over Utah Beach in a B-25 at 4,500 feet.  He was one of the few reporters present at the Battle of the Bulge, describing American soldiers having to use axes and shovels to dig foxholes in the frozen soil.

As the Allied advance moved into Germany in 1945, Mr. Hottelet described street fighting in Aachen, noting that the floors beneath his position were still in Nazi hands, and if snipers drew a bead on the position where he was broadcasting, the "listeners would never hear it."  Later, he was forced to bail out of a crippled B-17 while covering Operation Varsity, the Allied airborne assault across the Rhine River in late March of that year.

After the war, Hottelet remained with CBS, reporting from Russia and West Germany before returning to the U.S.  He was anchor for the network's morning news program in the 1950s.  He was named U.N. correspondent in 1960, back when that organization had some relevance on the global stage.  Mr. Hottelet spent the rest of his career on the U.N. beat before retiring from the network in 1985.  His tenure at CBS was longer than any of the other correspondents hired by Murrow.

While Mr. Hottelet never attained the "star" status of colleagues like Smith, Collingwood, Eric Sevareid (and Murrow himself), he was a talented and fearless reporter who understood the real mission of journalism.  He offered a straight-forward description of his duties as a war correspondent in a 2003 interview with the Hartford Courant:

“It was not our job to inspire people, to educate, to move them,” he said. “It was our job to tell them what was going on. We were accredited war correspondents. That was it. We were serious people at a serious job. We were out in the field, flying, on the front lines getting shot at — along with a 100,000 other people.”

In this era of narrative and agenda-driven journalism, that notion seems almost quaint.  And sadly, it's a reminder of how far Mr. Hottelet's profession has fallen.