"The Man Who Won the War for Us" 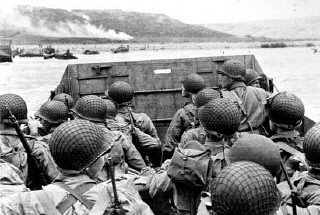 American troops prepare to go ashore in a Higgins Boat on D-Day, June 6, 1944

They remain iconic images of the "Longest Day:" American GIs, gathered behind the ramp of their landing craft, ready to splash ashore in Normandy.   Other photos, taken just moments later, capture the same men, wading through the surf towards the beach.  Many never made it; killed by German machine gun or artillery fire, or by simply stepping into an unseen hole in the sandy bottom; with more than 50 pounds of equipment on their backs, a soldier who slipped beneath the surface was likely to drown.

Given the immense human drama of D-Day, little thought is given to the miracles of organization, logistics and technology that delivered troops to the invasion beaches of northern France.  Operation Overlord came barely 30 months after America's entry into World War II.  On the eve of Pearl Harbor, the U.S. Army had only 600,000 men, many of them recent conscripts who were poorly equipped and inadequately trained.  Two-and-a-half years later, there were almost five million American soldiers serving overseas, organized into 80 divisions (emphasis ours).  While many of those formations were still green, there were plenty of battle-hardened units with combat experience in northern Africa, Sicily, Italy and the Pacific, among other locations.

Virtually all of those campaigns began with amphibious landings, and the difficult task of moving personnel and equipment from ship to shore.  While the Marine Corps and the Army would provide the troops, tanks, artillery, vehicles and supplies, the job of getting everything to the beach rested with the U.S. Navy, which had its own ideas about the "right types" of amphibious craft to get the job done.  Unfortunately, most of the American landing craft of the early 1940s were poorly designed and had a nasty tendency to capsize in heavy surf.

But an American entrepreneur had a better idea.  Andrew Jackson Higgins wasn't a naval architect by training; in fact, he dropped out of high school in Columbus, Nebraska after his junior year.  Interested in ships and timber, Higgins migrated to the Gulf Coast, where he became a successful importer and exporter of wood.  He also built a shipyard to service the vessels that carried his timber to distant markets.

Settling in New Orleans (where his shipyard was located), Higgins became aware of the pressing need for shallow-draft boats that could be used by trappers and the oil industry.  By this time, Higgins had completed several correspondence courses in ship design; that training, coupled with his own experience, allowed Higgins to develop a flat-bottomed model he called a "Eureka boat" that proved to be extremely popular with trappers and the oil companies.  It also attracted the attention of the Marine Corps, which foresaw the vast amphibious operations that would characterize war in the Pacific.  Not only could Higgins' craft keep going over such obstacles as sand bars and small logs; its motor was powerful enough to pull the craft off the beach after the Marines went ashore.

The Navy, however, refused to budge and Higgins appealed to then-Senator Harry Truman.  That set the stage for the "Battle of Norfolk," a competition between a Navy landing craft and a Higgins boat in May, 1942.  Both were assigned to put a 30-ton tank on the beach, through rough seas.  The Navy-designed craft almost foundered; at one point, sailors lined the sides, preparing to jump overboard if their boat began to sink. Higgins' design performed flawlessly, and his company received orders for thousands of additional landing craft.

To meet the demand, Higgins greatly expanded his New Orleans shipyard.  In the late 1930s, he had less than 100 employees at the facility; by 1943, more than 25,000 were working in the yard, producing various types of landing craft, PT boats and other light vessels for the war effort.  Higgins' workforce was completely integrated--virtually unheard of in a southern shipyard of that era--and regardless of their background, all workers doing the same job received equal pay.

On D-Day, most of the landing craft that ferried troops and equipment ashore were the Higgins design, and many came from his yard in New Orleans.  The two-fisted, hard-drinking man who told the Navy it "didn't know a damned thing about small boats" had revolutionized warfare.  No longer were amphibious forces required to attack through heavily-defended ports, to reach docks where troops and equipment could be off-loaded.  With Higgins' LCVP (Landing Craft Vehicle/Personnel) and larger LSTs (Landing Ship, Tank), amphibious attacks could be planned over wider areas, complicating enemy defenses.  Even Adolf Hitler acknowledged Higgins' contribution to the war effort, referring to him as "the new Noah."  General Dwight D. Eisenhower, who led the Normandy  invasion, put it more succinctly, calling Andrew Higgins "the man who won the war for us."

After the war, Higgins found himself in tax trouble with the IRS and struggled to keep his shipyard going.  Suffering from a stomach ailment, Higgins passed away in 1952; his son was forced the sell the business in 1957.  Mr. Higgins was largely forgotten in the years that followed, but interest in his boats--and his contribution to the war effort--was rekindled by veterans and historians.  The late Stephen Ambrose was instrumental in bringing the National D-Day Museum (now the National World War II Museum) to New Orleans, providing a venue to showcase Mr. Higgins and  his craft.  The LCVP on display at the museum is actually a replica, built from original plans, by surviving workers from Higgins' World War II yard.
***
ADDENDUM:  Early variants of the Higgins boat did not have a front ramp that could be lowered, allowing troops or vehicles to depart.  Disembarking or unloading from the original model meant "going over the side," an arrangement that was completely unsatisfactory.  When Andrew Higgins heard about a Japanese landing craft with a deployable front ramp, he described the system over the phone to his chief engineer, with directions to develop a similar system for his boats.  By the time he returned to New Orleans, his designers had a prototype ready.

It was that type of visionary risk-taking that helped American win World War II.  Henry Kaiser had never built a ship before 1940, but that didn't stop him from opening shipyards that produced a Liberty Ship in as little as four days.  Henry Ford built a massive complex and workforce--from scratch--that churned out more than 8,000 B-24 Liberator bombers.  Today, the byzantine rules of military acquisition and contracting discourage that type of innovation.  If we fought the Second World War with today's regulations, we would have produced enough equipment for D-Day--by 1952.

There were also LCPRs (landing craft personnel), built of wood with a small bow ramp big enough for a man to exit from easily. Same engine as an LCVP, a GM 6-71.
And LCMs (landing craft mechanized? machinery?)much larger (50') made of steel with large bow ramps and with twin GM 6-71 engines, which could carry one or two tanks and trucks. And there were larger vessels, actually small ships, e.g., LSILs (landing ship infantry, large), LSMs (landing ship mechanized?) which looked like small LSTs.

My friend Nate Weiser was stationed at Pearl when it was attacked.
He had been in the army in comms for a year and some by then.
A year or so later he was sent to OTS in the states.
He realized he didn't want to be an officer and dropped out.
So they sent him to England and he got to visit Normandy.
He says if his LST hadn't gotten stuck on a sand bar, he might not have lived the day.
He later got the Bronze Star (after Bastogne), as a MSgt.
97 years old this year.

My father came ashore 10 days after D-Day as part of the 3rd Armored Division. Said the amount of wrecked/abandoned equipment was still staggering.

Dad was a maintenance NCO, in charge of a platoon of tank retrieving wreckers. Fought with the 3rd all the way across Europe. He speaks at length about some of the funny stuff that happened, but doesn't talk much about pulling those shot-up Shermans off the battlefield. The Sherman had very little armor and 88mm rounds went through them like a hot knife through butter. What the maintenance guys found inside the tank was pretty gruesome, even when the bodies had been removed.

The 3rd landed in Normandy with 232 M-4 Shermans. By the time the Germans surrendered, they had lost over 700 tanks in combat, a cumulative loss rate that was staggering. But many of those damaged tanks returned to the battlefield, thanks to guys like my dad who pulled them in, and the maintenance crews who repaired them.

The Sherman had many faults as a tank, but it was easy to repair and many of the guys (like my father) had a strong mechanical background. While the Wermacht junked all but the most lightly damaged Panthers and Tigers, we made every effort to repair damaged equipment, and that made our logistical superiority that much more overwhelming. From the German perspective, it was bad enough that the U.S. was out-producing you by a factor of four or five, but when we had the time, skill and resources to repair our damaged tanks, quickly and efficiently, the Germans knew they were doomed.

BTW, my dad turns 98 in October, still drives his car and does his own gardening.

Nate Hale, that is cool.
My own dad came ashore on the 7th, not the 6th. Not a lot of detail.

War is a fascinating subject. Despite the dubious morality of using violence to achieve personal or political aims. It remains that conflict has been used to do just that throughout recorded history.

Your article is very well done, a good read.