Return of the Master

Guess I should spend a little more time reading the comics.

Like a lot of folks, my time with the funny papers begins--and ends--with Dilbert.  Simply stated, Scott Adams is the best comic strip artist and writer of his generation; if you can't relate to Dilbert, Wally, Dogbert, the Pointy-Haired Boss and the rest of the gang, you've never worked in a cubicle, or been part of some soul-stealing corporation or government bureaucracy.

But before Scott Adams, there was Bill Watterson and "Calvin and Hobbes."  The adventures of six-year-old Calvin and his imaginary tiger friend, Hobbes, were appointment reading for millions of fans around the world, beginning in the mid-1980s.  Almost thirty years later, most can recall a memorable strip (or strips); Calvin as Spaceman Spiff; battles with his rival, Susie Derkins, the long, boring hours in the classroom with his teacher, Miss Wormwood, or just the give-and-take with Hobbes.  Watterson had a genuine gift for poking fun at almost everyone--and everything--as illustrated by one of our favorite installments: 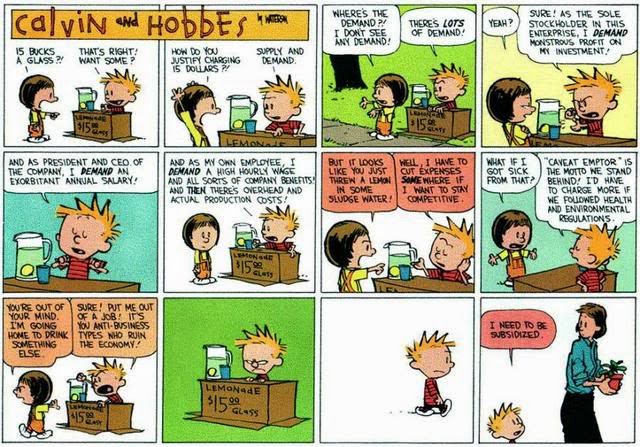 The gags were clever, the artwork was often amazing, and effort was even more impressive when you consider that Watterson did everything himself.  No writers to help with the jokes; no art assistants to help with the drawing or inking. Bill Watterson remarked that "he put everything he had" into the strip, and no one could dispute that claim.

Watterson was also unique among comic strip artists, refusing licensing deals for his characters, a decision that cost him tens of millions of dollars, though various collections of Calvin and Hobbes have sold extremely well.  For fans of the strip, those volumes are all we've had for the past 19 years; Watterson retired the strip at the height of its popularity in 1995.  Since then, he has focused on painting and music, declining all requests for interviews and new projects involving his characters. Legend has it that Watterson refused a call from Steven Spielberg.

As for new strips, that appeared to be an impossibility.  When Calvin and Hobbes shoved off on that last toboggan run in 1995, Watterson signaledhat he was moving on as well.

But in recent weeks, there have been a couple of unexpected events.  First, the reclusive Mr. Watterson contributed poster art (and an interview) for "Stripped," a new documentary exploring the migration of comics from print to on-line.  And this past week, readers of Pearls Before Swine got a real treat.  Stephan Pastis, the creator of the strip, supposed "surrendered" the art portion of his strip to a precocious second-grader named Lib (that's almost "Bill" spelled backwards, as he observed).
Pastis, a former attorney, frequently makes fun of his artistic skills, so Lib's claims that she could do a better job was a riff on a long-running gag.

The substitute artist bit was Watterson's idea, and predictably, Lib/Bill executed her portions of the strip in the unmistakable style of "Calvin and Hobbes."  You can see the strips here, here and here.

Could this foretell a return by Watterson?  That's probably too much to hope for, but it was nice to catch a glimpse of the master.
Posted by Unknown at 9:51 PM

Some of us liked the Far Side, too.

I stopped reading Pearls a while back, when I dropped newspapers I believe.
I do remember him mocking other long running strips (particularly reprints) that kept newer artists from print.
Reprints of C&H would fit that description, oddly enough.