The Legacy of Vega 31 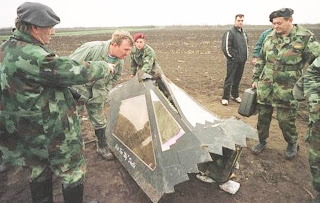 Wreckage of a USAF F-117, shot down over Serbia during Operation Allied Force almost 11 years ago. Recent reports suggest that China bought pieces of the downed jet, and copied the stealth technology for use in their new J-20 fighter.
March 27, 1999: it was the fourth night of Operation Allied Force, the NATO bombing campaign against Serbia. The effort's initial phase had gone remarkably well; U.S. and allied aircraft had inflicted heavy damaged on Serb air defenses and other critical targets, without the loss of a single NATO aircraft. When the Serbs tried to fight back, they generally paid a high price; three of their MiG-29 Fulcrums had been shot down in the early hours of the conflict, and a number of surface-to-air missile (SAM) batterys had been knocked out of action as well.
But the Serbs would soon exact their revenge--and against an unlikely target. The first U.S. aircraft lost in Allied Force was an F-117 stealth fighter. Almost invisible to radar (and largely invulnerable to enemy air defenses), the Nighthawk had made its reputation over Iraq almost a decade earlier and was assigned to high-value Serbian targets.
After dropping his bombs near Belgrade, Lt Col Dale Zelko turned his F-117 towards the northwest, in the general direction of Aviano AB, Italy, where the stealth jets were deployed. It was his second sortie of Allied Force and everything seemed routine--or, as routine as a combat mission could be--until the aircraft's defensive system went off, telling Zelko that his jet (Callsign Vega 31) was being targeted by enemy air defenses.
Second later, a Serb SA-3 exploded near the F-117, sending it out of control. Realizing the aircraft would not survive, Zelko pulled the ejection handles and left the crippled jet. What followed was a six hour search-and-rescue mission to recover Lt Col Zelko before he could be captured by Serb security forces. The story of that rescue has been retold in various publications, including this detailed, 2006 account by Darrel Whitcomb of Air Force magazine. It's an amazing read, and a fine tribute to the chopper crews, A-10 pilots and pararescuemen who flew deep into Serb territory to retrieve Colonel Zelko.
But the final flight of Vega 31 may have another legacy. In recent days, various media outlets have reported that technology used in China's new stealth fighter may have been copied from the downed F-117. According to the U.K. Telegraph, Chinese agents scoured the Serbian countryside for Nighthawk components after it crashed:

..The Admiral who was Croatia's chief of staff during the Kosovo War has said he believes that China formulated the technology for its J-20 jet from an American F-117 Nighthawk stealth fighter that was shot down over Serbia in March 1999.

"At the time, our intelligence reports told of Chinese agents criss-crossing the region where the F-117 disintegrated, buying up parts of the plane from local farmers," Admiral Davor Domazet-Loso said. "We believe the Chinese used those materials to gain an insight into secret stealth technologies."

Admiral Domazet-Loso's account is hardly a revelation; in the months following Allied Force, various intelligence accounts suggested that much of the aircraft's wreckage had been shipped to Russia and under the regime of then-President Slobodan Milosevic, Serbia routinely shared military information with Moscow, Beijing and even Saddam Hussein's Iraq.

Of course, there are legitimate questions about how much information China might have obtained from the remnants of that F-117, and the role it played in development of the new F-20. However, it is also worth noting that the Nighthawk's systems were roughly 20 years old at the time of the shoot down, and stealth technology had advanced steadily since the early 1980s. For example, the F-117 made heavy use of its angular design (and radar-absorbent material) to reduce its radar signature.

By comparison, the F-22 relies more on advanced shaping to deflect radar signals away from enemy antennas. The Raptor also employs an on-board signature management system which measures the aircraft's "vulnerability" throughout the electromagnetic spectrum, alerting pilots and maintainers when key features need attention. Yet, the F-22 doesn't trade performance for stealth, as the F-117 did.

While the J-20 is clearly patterned after the Raptor, we still don't know how much of its low-observable capability is attained by shaping (versus RAM), and whether its sensors are stealthy as well. And that represents a critical design feature. For example, if the J-20 has a conventional, high-energy pulse-doppler air intercept radar, that would largely negate the stealth characteristics, providing adversaries with an easy way to detect and track the jet.

At this point in its development, it's quite possible the J-20 has avionics similar to those found on SU-33s in the PLAAF inventory, while operational models--entering service at the end of this decade--will have more advanced sensors. While the new Chinese fighter looks impressive, Beijing has a long way to go in producing them in large quantities, with the sensor options and weaponry that truly maximizes their capabilities.

As for that "collection effort" in Serbia, the Chinese were merely following a time-honored custom. Why spend billions on research and development when you can copy existing technology and improve upon it? Russia elevated "reverse engineering" to an art form during the Cold War and Beijing is continuing that tradition today. And, if you believe the U.S. is above that sort of behavior, think again.

In early 1945, an Army Air Corps Colonel named Harold Watson was given a critical assignment: send teams of scientists, engineers and intelligence specialists into Germany (alongside advancing Allied forces) and "appropriate" advanced Nazi weaponry before it could be destroyed, or captured by the Russians. Watson and his men proved adept at their task; they captured enough German jets to fill up the deck of an escort carrier, which ferried them back to the United States. The U.S. team was also successful in identifying--and recruiting--German scientists from advanced aircraft and rocket programs. Many of our post-war efforts in those areas owed a debt to Watson and his teams.

Later promoted to Major General, Watson became an early commander of the Air Technical Intelligence Center at Wright-Patterson AFB in Ohio. Today, the organization is known as the National Air and Space Intelligence Center (NASIC), but one of its primary missions is the analysis and assessment of foreign military technology. The street that leads to NASIC's headquarters is named for General Watson, who understood the value of "borrowed" technology.

ADDENDUM: As for the event that reportedly gave China access to our early stealth technology (the downing of Vega 31), that "wound" was largely self-inflicted. As we've noted previously, planning teams for Allied Force used the same ingress and egress routes for strike aircraft; the Serbs quickly caught on and deployed their air defenses accordingly. They were also aided by spies, parked on public roads near Aviano AB. With cell phones, they reported the departure and arrival of various Allied aircraft--information that was quickly relayed to air defense crews in the field.

So why didn't the Serbs shoot down more NATO aircraft? Several reasons, actually. First, the introduction of advanced, precision-guided munitions allowed most bombing runs to be conducted from medium altitude, taking attack jets largely out of the AAA envelope. Additionally, the Serb fighter force was a non-factor after the first night of the air war, and their SAM force consisted mostly of antiquated SA-2 and SA-3 missiles. Radars associated with those systems were very vulnerable to jamming and the threat of Allied HARMs kept most of them off the air for extended periods.

Still, the downing of that F-117 proves it is possible for legacy air defense systems to threaten advanced aircraft--particularly if we help the enemy with predictable routing and interval times between formations. Incidentally, the Serb SA-3 commander that brought down Vega 31 was considered among the best in the FRY defense forces and after the war, he made several visits to the U.S., sharing his secrets with us--for a price, of course.

Good posting!
I would only add two more points to yours. First, that the acquisition of Nazi technology at the end of WW2 was under a legal claim that counted towards war reparations. The second point is, if the Chinese are using F-117 tech, which configuration are they using? The F-117s were essentailly handbuilt-and the outer mold line (OML) stackups evolved over time. We set out to standardize their OML LO configuration via the Single Configuration Fleet Program in 2000 for both performance and sustainability purposes.

Perhaps another source of the J-20's technology?:

China would not have gotten much of anything out of the wreckage. I was stationed at San Vito with JSOTF during Kosovo. I also knew Zelko from Holloman AFB. When the 117 pilot ejects the computer self destruct and that was really the only thing that would have been any help. The RAM had already been leaked by this time and the plane itself was just a combo of other planes out there. The only way it could even fly was with its guidance computer. The pilot did very little in flight.

I had the pleasure of working with Dale Zelko after all this took place. He was Commander of the 368th Recruiting Squadron at Hill AFB, UT. I was a flight commander, Major at the time, at the Group HQ located across the street. Dale is a good guy I can tell you from my first hand experience.