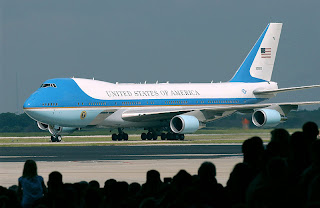 $181,000 an hour: a new study by the National Taxpayers Union lists that figure as the cost for a single flying hour on Air Force One. Based on that total, it cost over $8 million to fly the presidential jet around the world during President Obama's recent visit to India and Indonesia (Wikipedia photo).

It's official: Barack Obama is the most-travelled President during the first two years of his term. A new study from the National Taxpayers Union calculates that Mr. Obama has already spent 55 days abroad since taking office, during 15 separate visits.

But before conservatives start complaining about President Obama's waste of tax dollars, it should be noted that he beat the old record, held by George H.W. Bush, by exactly one day. The elder Bush also tied Mr. Obama for the number of overseas trips during his first two years in office. By comparison, Bill Clinton and George W. Bush made eight and eleven foreign trips (respectively) during the first two years of their administrations, spending less than 50 days abroad. However, Mr. Clinton made up for it during his second term, and finished his eight years in office as the most-travelled chief executive, having spent 233 days abroad, or almost eight months of his presidency.

Not surprisingly, the NTU discovered that the amount of presidential travel has increased significantly over the past 50 years. Dwight Eisenhower spent on nine days overseas during his first term; John F. Kennedy was outside the United States for 20 days, and Lyndon Johnson spent just one day abroad during his first term.

And, as you might expect, the growing number of overseas trips has come at a greater cost to the taxpayer. Officially, the government won't say how much it costs when the President travels to a foreign land, because the tab includes everything from operating costs for military aircraft, to hotel bills for his entourage. Getting exact costs for those various expenses has been difficult. Additionally, some expenses (namely the cost of Secret Service protection) are classified, and may never be disclosed for security reasons.

Based on information in the NTU study, it seems clear that Mr. Obama's recent visit to Asia didn't cost $2 billion, as was originally reported. Call that the good news. On the other hand, transportation costs for the trip to India and Indonesia easily exceeded $120 million (more on that in a moment).

The NTU freely admits that its projections are incomplete, given the government's refusal to release certain travel expenses. But of the real insights offered by the new study is the most precise accounting to date of flying hour expenses associated with the Presidential aircraft, Air Force One. Previous estimates pegged the cost per flying hour at somewhere between $34,000 and $56,000, based on decade-old figures from the White House Military Office and the Government Accountability Office. After last year's infamous "photo op" over New York City, media reports suggested the hourly cost for Air Force One was $100,000.

As it turns out, those figures aren't even in the ballpark. A spokesman for the 89th Military Airlift Wing at Andrews (which operates and maintains the Presidential jet fleet), puts the cost per flying hour at a whopping $181,757. That includes fuel, flight consumables, depot-level repairs, aircraft overhaul and engine overhaul--basically, most of the major expense categories associated with any military aircraft.

Incidentally, the study doesn't say if "flight consumables" includes crew costs; Air Force One has a crew of 26, including pilots and flight engineers; cabin stewards and even on-board doctors and nurses. Since pay and training for military personnel are recorded in separate budget categories, those expenses probably aren't reflected in the cost per flying hour.

According to the NTU, operating costs for Air Force One during Mr. Obama's recent overseas trip to Indonesia and South Korea totaled $8.7 million. But remember: that's just for the Presidential aircraft. A former cost analyst for the White House Communications Agency (WHCA), who spent years as an presidential advance team member, offered this important observation:

"President Clinton's 'African Safari' (in late March and early April of 2002) cost the U.S. taxpayer $42.8 million in transportation costs alone. That's equal to $52 million in 2010 dollars. And Clinton's team of 1,300 was less than half the size of Obama's 3,000-member entourage. Using the same math, the transportation costs for that group would be at least $120 million."

The analyst also noted other, over-looked costs associated with a presidential visit, including the advance teams sent to every event site on the chief executive's itinerary. These personnel, including Secret Service agents; WHCA representatives, crews and support personnel for Marine One and of course, White House staffers. These teams often deploy weeks in advance and don't leave until after the president departs.

According to current government figures, each member of the advance team dispatched to Mumbai received $515 a day in per diem, covering their lodging, meals and incidental expenses. Multiply that by the number of individuals assigned to the various advance parties, and you'll see another reason the presidential travel tab is so high. Incidentally, per diem rates for Indonesia are lower, averaging about $200 a day, per person.

Clearly, no one is suggesting that the Commander-in-Chief fly coach on AirTran to his next summit. But there are ways to save money on overseas travel, including a switch to more fuel-efficient aircraft. The Air Force is currently working on the next generation of presidential aircraft, with a VIP version of the Boeing 747-8 as the most likely airframe. There has also been talk about utilizing the 787 Dreamliner as the next Air Force One. Both aircraft are much more efficient than the current presidential jets.

But the best option for saving money on White House travel is reducing the number of trips. Will Mr. Obama make less frequent excursions over the next two years? Don't bet on it. Truth be told, Presidents like the pomp and circumstance that comes with foreign travel and besides, it's a convenient escape after your party takes an electoral shellacking. In that regard, Obama is no different than his predecessors.
Posted by Unknown at 12:01 PM

One problem with $120 million projection is that the source for Obama's entourage of 3,000 is the same unnamed Indian official who stated that the trip would cost $200 million a day. I never was able to find out how many officials accompanied the President on that trip.

Being more popular overseas than at home may play a part in his travel plans, too.