And Don't Ever Call Me Shirley 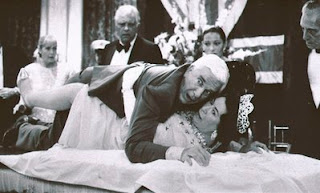 Leslie Nielsen (as Frank Drebin) and Jeanette Charles (playing Queen Elizabeth) in the first Naked Gun movie. Nielsen died Sunday at the age of 84 (AP photo).
Today's passing of actor Leslie Nielsen has produced an on-line avalanche of his best lines from Airplane and the classic Naked Gun series. True, Mr. Nielsen didn't write any of those jokes, but his droll, deadpan performance in those films assures him of a place in the pop culture pantheon.
Indeed, Nielsen's success in those comedic gems largely obscured his long, successful career as dramatic actor in film and television. By the time he was cast in Airplane!, Nielsen had been an actor for over thirty years, and kept working for three more decades after becoming an overnight sensation--at the age of 54.
Born into a Canadian family (his brother served as the nation's Deputy Prime Minister in the 1980s), Leslie Nielsen caught the performing bug from his half-uncle, silent film star Jean Hersholt. After graduating from high school (and a brief stint in the Royal Canadian Air Force during World War II), Nielsen migrated to New York and began working in the early days of live television drama. His first appearance was in 1948, alongside another newcomer named Charlton Heston.
Nielsen worked steadily as a leading man during the 1950s, mostly in television and science fiction films. Over the next 20 years, he made a successful transition to character actor and remained busy; it's almost impossible to find a dramatic series from the 1960s or 70s that doesn't list at least one guest star appearance by Mr. Nielsen. He almost invariably played an authority figure; with that stentorian voice, white hair and commanding presence, he was a natural choice to play doctors, judges, police officers and similar characters.
While most of the roles were forgettable, they were excellent preparation for Airplane! and the other spoof films that followed. Producers Jim Abrahams, David Zucker and Jerry Zucker were looking for actors who could play it straight, despite the never-ending jokes and sight gags that surrounded them. While Robert Hays and Julie Hagerty were (technically) the stars of the film, old pros like Peter Graves, Lloyd Bridges, Robert Stack and of course, Leslie Nielsen stole the show. If you can't recite at least five or six of their lines from memory--including Nielsen's "Don't ever call me Shirley"--you've led a very sheltered life, or you passed away in 1979.
According to Hollywood legend, the Zucker brothers and Abrahams wanted Nielsen for Airplane!, but wondered if he would take the job--skewering the type of character that had been his bread-and-butter for decades. They invited him to lunch at a Mexican restaurant in Hollywood; a farting contest ensued and the producers knew they had their man.
The film's success led to Nielsen's casting in their next project--and arguably, the actor's finest comedic work--the late, lamented TV parody series Police Squad. Presented in the style of a 1960s Quinn Martin cop drama, Police Squad was (perhaps) the funniest show in television history. The title sequence alone contained more humor than most sitcoms of any era. It began with the red flashing light of a squad car, racing down a city street. "Police Squad...In Color," intoned announcer Hank Simms, employing the same Voice-of-God inflection he used on various Quinn Martin series. Of course, this was 1982, and the networks had been broadcasting in color for almost two decades.
In the classic Martin style, Simms then introduced the cast, including Nielsen's Lieutenant Frank Drebin. As the characters appeared, each was shot at and returned fire, including "Rex Hamilton as Abraham Lincoln." The sequence also included a "special guest star" (Lorne Greene, William Shatner and Florence Henderson, to name a few) who meet an instant, grisly death, ending their appearance on the show. As the sequence ends, the on-screen title of the episode never matches the one announced by Simms.
And that was just the title sequence. The rest of the episodes were chock full of jokes, sight gags, puns (and just about anything else that would draw a laugh), offered at a rapid-fire pace. The writing was superb, and the actors somehow managed to deliver their lines--for at least one take--without cracking up. Nielsen found comedic gold in Drebin, earning an Emmy nomination for his work.
Unfortunately, Police Squad lasted only six episodes before being cancelled by ABC. The network's programming chief, Tony Thomopolous, said the show was taken off the air because "Viewers had to watch it in order to appreciate it." Mr. Thomopolous's remarks later became synonmyous with the stereotypical brain-dead TV executive, but was probably right. The series was years ahead of its time, and it's still funnier than anything described as a network sitcom in 2010.
Police Squad (and its star) quickly gained cult status, generating three Naked Gun films in the late 80s and early 90s. Nielsen starred in other movie spoofs as well, though none ever matched the success of Airplane! or the Naked Gun franchise. Sadly, Mr. Nielsen is no longer with us, but his best comedic moments survive on DVD and at You Tube, where you can watch some of the funniest bits from Police Squad.
Posted by George Smiley at 9:24 PM