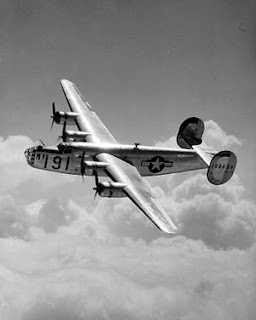 A B-24 in flight over Maxwell Field, Alabama during World War II (Wikipedia photo).

The National World War II Museum in New Orleans is expanding--with an emphasis on some of the aircraft that helped secure victory. As the AP reports:

Bombers and torpedo planes will be the stars of the latest expansion of the National World War II Museum, and visitors will be able to get close-up views of the war planes on elevated catwalks.

Construction of the new $35 million exhibit will be formally announced Friday. One of Boeing Co.'s most famous World War II aircraft, the B-17G Flying Fortress heavy bomber, will be a centerpiece of the new exhibit.

The B-17G is recognizable by the nose turret designed to defend against oncoming attacks by fighter aircraft.

"When you watch some of the old movies of bombing runs, its the plane you see," said Boeing historian Mike Lombardi said.

The B-17 that has gained enduring fame, in part because it was a primary weapon in U.S. strategic bombing against Germany and because it was featured in the 1949 movie and 1960s television series "12 O'Clock High."

The new museum wing will be called the U.S. Freedom Pavilion: Land, Sea and Air.

Other aircraft set for inclusion in the new display include a B-25 Mitchell bomber (built by North American Aviation); a General Motors TBM Avenger torpedo bomber, and a Douglas SBD Dauntless dive bomber.

The exhibit is being financed largely through a $20 million grant from the Defense Department, and $15 million from Boeing.

Both the Pentagon and the aircraft giant deserve praise for helping to finance the expansion. Sixty-five years after the end of World War II, vintage warbirds like the Mitchell and the B-17 are becoming increasingly rare; collections like the one at the World War II Museum help preserve important pieces of military history.

Still, we can't help but chuckle when we hear the Flying Fortress referred to as the "primary" weapon in the U.S. strategic bombing campaign against Germany. That suggests that the B-17 was virtually alone in the flak-filled skies over Europe. Yet, even a casual student of the Second World War knows that the Army Air Corps employed two different types of heavy bombers in operations against the Third Reich, the B-17 and the more widely produced B-24 Liberator.

Today, only a handful of B-24s still remain, but at the height of the war effort, Liberators were rolling off the assembly line at a rate of one per hour. While the bomber was the creation of Consolidated Aircraft, various corporations produced the B-24 during World War II, including the Ford Motor Company. Ford's sprawling Willow Run complex in Michigan accounted for almost 70% of all Liberator production after it opened in late 1942. Pilots and aircrew members slept on 1,300 cots at Willow Run, waiting for their aircraft to be completed. All told, more than 18,000 B-24s were built, making the Liberator the most-produced American military aircraft in history.

The B-24 was actually a more advanced design than the better-known B-17, with a greater range, higher top speed and heavier bomb load than the Flying Fortress. Incorporating such features as the high-mounted "Davis" wing, more powerful engines and "roller" bomb bay doors that retracted into fuselage, the B-24 was well-suited for a number of tasks, ranging from strategic bombing to submarine hunting. During the Battle of the Atlantic, Liberators accounted for at least 70 German subs, and their maritime patrols helped negate the U-Boat menace.

Indeed, the B-24's versatility and innovation probably worked against the aircraft and its legacy. After 1942, most B-17s were dispatched to England or the Mediterranean, for bombing raids against Nazi-occupied Europe. Meanwhile, large numbers of B-24s were still being assigned to the Pacific (replacing the shorter-ranged Flying Fortress), sub patrols over the Atlantic and of course, the heavy bomber squadrons of the 8th and 15th Air Forces.

According to historical records, Liberators represented about one-third of the combat strength in the "Mighty Eighth," while B-17s were assigned to most of the command's groups and squadrons. That's one reason that famous footage from daylight bombing raids invariably features the B-17. There were fewer B-24 squadrons in England, and combat photographers rarely made it to some of the far-flung outposts where Liberator units (and their crews) were often assigned.

The B-24 was also more difficult to fly and posed unique hazards for the men who flew it. For example, most of the fuel tanks were placed in the upper fuselage. That feature, coupled with the Liberator's light-weight construction made it more vulnerable to battle damage and catching fire. Additionally, it was difficult for crew members forward of the bomb bay to bail out of a damaged aircraft, and the B-24 often broke apart during ditchings or crash landings, another by-product of its high-wing design. No wonder the bomber was sometimes dubbed the "Flying Coffin."

Still, the Liberator was an exceptionally successful bomber, amassing an impressive combat record--even under the most difficult conditions. Five B-24 pilots and crew members received the Congressional Medal of Honor for their exploits during the raid on enemy oil facilities around Ploiesti, Romania on 1 August 1943. Attaching some of the most heavily-defended targets of the war, 53 Liberators were shot down; more than 600 airmen were killed, wounded or captured. But the crews never wavered, despite key navigation errors that disrupted the attack sequence--and withering enemy fire against the low-level formations.

We haven't heard if the new collection in New Orleans will include a B-24. Boeing would probably prefer for the B-17 to take center stage and besides, there are few available Liberator airframes. By one estimate, only three B-24s are still airworthy (all in the United States) and only 10 on static display around the world.

Barring the acquisition of one of these aircraft, the museum's best hope for getting a Liberator is literally at the bottom of the ocean (or a lake, or a river). Scores of B-24s lost during World War II are resting on the bottom of various bodies of water. Recovering one of those aircraft--and restoring it to display quality--would be a time-consuming and expensive process. But it is the only viable option for expanding the number flyable B-24s, or those on display at various museums.

Perhaps if Consolidated had survived as a company--or if Ford had remained a major aircraft manufacturer after World War II--there might be more interest in (and money for) the preservation of B-24s. Instead, as the number of surviving Liberators has dwindled, the bomber become something of an afterthought--except for aviation enthusiasts, history buffs, and that dwindling cadre of airmen who took the B-24 to war.
Posted by George Smiley at 3:42 PM

Those aircraft and their crews were truly amazing. Today, one only has to move one's wrist (in the case of the F-16 with side stick), or apply small forces to fly modern strike fighters. I put my mother in an FA-18 dome simulator and had her dropping bombs relatively close to on target within about 15 minutes, but those old bombers and fighters took both muscle and skill to perform the mission. Not to mention the fact that the casualty rates were very high, and the crews knew it every time they went out. These guys are truly heroes!

Fabulous post -- thanks! I too marvel at how highly successful aircraft and their roles in history tend to be overlooked. A few years ago I decided to bone up on the B-24 and its design because my Dad was Plane Captain on PB-4Ys during the Korean War. The fascinating thing about the ‘Davis Wing’ is that it was based upon mathematical nonsense: it was purely accidental that Davis’ theories yielded an airfoil that produced laminar flow...but no one knew it. At the time it was adopted, testing showed that the wing worked, but no one could explain why. I love the irony of the arguably most successful aircraft of WWII having a wing design that was pure serendipity and sprung from the mind of an outsider.
I believe part of the disparity between how planes are remembered has a lot to do with how they are covered (or not covered) by the news in their day, followed closely by how crews like the way they ‘fly’. This last point was really driven home to me back in the mid 80’s when I was looking into dry leasing a support aircraft for a flight test program. The choices were a Beech 1900 or Metroliner. The pilot we had on board kept trying to sell us on the Beech by asserting certain aspects of the Beech were better, and on every point he brought up the data showed the Metroliner was actually on top (I remember specifically single engine-out performance and cargo door size as two factors). Then the pilot argued that since Beech King Air variants were already flying for the DoD, the support would be easier to set up, and I had to tell him the AF just fielded a few Metroliners. Finally, the pilot broke down and admitted he and his guys just “liked the way the Beech flew”. Both aircraft met requirements and cost was a wash, so guess what? We selected the 1900 (and of course shortly after the program was cancelled). I wonder how much of the B-17’s ‘popularity’ comes from being the first bomber in the field in significant numbers of its generation – and gaining the initial constituency that ‘liked the way it flew’?
I’m looking forward to the New Orleans museum coming to fruition. Thanks again!

The National World War II Museum in New Orleans is getting a B-24 Liberator that is being made museum ready right now. Estimated museum unveiling is late 2011.