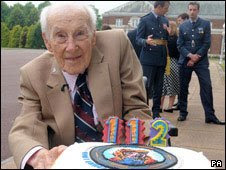 At age 112, Henry Allingham is not only the oldest man in Europe, he's also the last survivor of the Battle of Jutland, and the last living member of the RAF's initial cadre (BBC photo)

In recent posts, we've celebrated the life of Frank Buckles, the last surviving U.S. veteran of World War I. Mr. Buckles was only 17 when he joined the Army, then headed to France as part of the American Expeditionary Force. Though he never saw combat, Mr. Buckles endured another kind of hell 25 years later, when (as a civilian steamship executive), he was captured and held as a POW by the Japanese. Buckles spent more than three years in Japanese prison camps before being liberated.
Today, Mr. Buckles has become something of a celebrity--and deservedly so. He's the last, living American link to a generation that stemmed the German tide during World War I, and returned home to an indifferent public. There were a few victory parades, but none of the benefits that greeted veterans of the Second World War. It's more than ironic that Mr. Buckles' service to his country was finally recognized when he became our only living veteran of the Great War.
Still, at age 108, Frank Buckles is a broth of a boy compared to Henry Allingham, who turned 112 this week. Not only is Mr. Allingham the oldest man in Europe (and one of the 20 oldest people in the world), he also has an impressive military resume.
Allingham joined the Royal Naval Air Service during World War I, but only after he mother died--she was against his plans to enlist. As a crew member on a flimsy seaplane, he witnessed the Battle of Jutland in 1916. Mr. Allingham is the last survivor of that epic sea engagement; even today, he remembers watching large shells from the opposing battle lines "skip across the water."
Rated as a rigger and mechanic, Allingham later retrived downed aircraft on the battlefields of France, where he was bombed and shelled. When the Navy's Flying Service and the Army's aerial arm merged in 1918, Mr. Allingham became a founding member of the Royal Air Force. As you might have guessed, Allingham is last surviving member of the RAF's inital cadre.
After the war, Mr. Allingham took a job at Ford, staying there until retirement. During World War II, he worled on several defense projects, including counter-measuers for German magnetic mines. Allingham outlived his wife (who died in 1970), and his two daughters, who lived into their 80s. Today, most of his family lives in the United States, but they still return to Britain every June for his birthday.
Both the U.K. Telegraph and the BBC have video of this remarkable man. Mr. Allingham's mental faculties remain extraordinarily sharp, despite his advanced age.
More importantly, Britain's First World War Veteran's Association has taken the necessary steps to preserve Allingham's recollections for future generations--something that has been done (belatedly) with Frank Buckles and the last American survivors of World War I.
Happy Birthday, Mr. Allingham. And many more.

Please accept a bit of criticism about your form, called "burying the lead." One has to read through two fairly long paragraphs about Frank Buckles to get to the real point of the article.