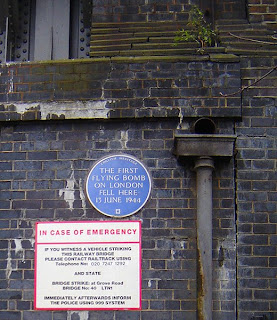 Couldn't work out to do this any other way.

The following are the co-ordinates where I believe the first V2 hit in W London, I grew up in Chiswick and the location is where Chiswick Lower school used to be before it was demolished and replaced with an housing estate. The school was built on the hole made by the V2.

I think if you type these into Google Earth the following description will be clearer.

This is I believe the first place a V2 missile struck England. There is a new housing estate there now, the round building could be considered the impact point.

This 'block' bounded on three sides by Stavely Road, Burlington Lane and Park road was mostly destroyed leaving just the houses on the previosly mentioned streets (I think these houses survived but they may have been built afterwards). The centre disappeared and subsequently Chiswick Lower school was built in the space made by the missile.

I'm using a special profile today in honour of Paddy's vote on the EU :-)

Don't know how to contact you, but I wrote up a post on single sex classrooms, which my be of interest to you, as a non-mainstream education philosophy item. It's http://americanmohist.blogspot.com/2008/06/value-of-single-sex-education.html

I was a ten year old lad living in Sussex, and I observed many V1 "kills" by mainly Tempests, including just one tip-over incident.
About two weeks before the first V2 attack on London and with no warning we heard at least four very loud bangs way up beyond vision in a cloudless sky, and after a while (probably a half minute) debris came raining down all around us, some quite large objects.
The next day the army and some civilians with arm-bands arrived and we were told to stay indoors until further notice.
I peeped through an attic window and these people were digging out all the objects from the very deep holes they were in, there were what looked like gas cylinders, heavy pipework and also large sheets of what looked like aluminium, all twisted and jagged and in some cases blackened.
Everything was loaded onto the army trucks that were drawn up in an adjacent field.
(full details on: www.irememberthewar.com my website of war memories) It was suggestyed at the time that this was the precursor of the V2 rockets that went wrong