End of an Era

If you happen to be in southeastern Virginia today, particularly around the Oceana Naval Air Station in Virginia Beach, cast your eyes toward the eastern sky and look for a large formation of swing-wing Navy fighters. Then, if you can, pause for a moment, because a remarkable era in naval aviation is drawing to a close.

Later this morning, the Navy's last two active duty F-14 Tomcat squadrons will return from the final combat deployment onboard the USS Theodore Roosevelt, and land at Oceana. With their return, the Navy will begin the process of retiring its final Tomcats from active duty units, and replace them with the F/A-18 Super Hornet, the multi-role fighter that has become the service's primary strike and air superiority aircraft.

A total of 22 Tomcats, representing squadrons VF-14 and VF-213, are expected to return to Oceana around midday, almost six months after they embarked on a combat cruise to the Persian Gulf. While assigned to the Roosevelt's air group, they flew close air support missions for allied troops on the ground in Iraq.

The Tomcat's mission in Iraq was quite a departure for a swing-wing Navy fighter originally envisioned--and built --for fleet air defense. In the late 1960s, the Navy was concerned about the growing threat from Russian bombers and anti-ship missiles to its carrier battle groups. The F-14 was designed (primarily) to engage enemy aircraft at long distances from the battle group. The Tomcat was built around one of the first, phased-array air intercept radars (the AWG-9) and the AIM-54 Phoenix missile, which had it own active radar as well. The Tomcat/AWG-9/Phoenix combination were capable of detecting and engaging targets at ranges of more than 100 miles; when added to the F-14's impressive combat radius, it was a platform optimized for defending the fleet.

But with the end of the Cold War, the Russian threat largely evaporated, and the Tomcat was adopted for other missions. By the mid-1990s, some squadrons had acquired a capability to drop precision-guided weapons on ground targets, producing another nickname ("Bombcat") that was accepted less enthusiastically by F-14 pilots and radar intercept officers. As a multi-role fighter, the Tomcat soldiered on, even as the Super Hornet began to replace it. The F/A-18 doesn't have quite the range of the Tomcat, and it can't carry the Phoenix, but it is more reliable and cheaper to operate. According to one Navy maintenance chief, the F-14 requires 30-60 maintenance hours per flying hour to keep it in the skies; the Super Hornet needs only 5-10 hours of maintenance for each flying hour.

The Tomcat leaves behind an impressive legacy, serving in every major conflict from Vietnam (F-14s covered the evacuation of Saigon), to Iraqi Freedom. And, of course, it became the Navy's ultimate recruiting poster in the film Top Gun, even if the exploits of Maverick and Goose were 99% fiction. Interestingly, the Pentagon brass initially rejected offers to assist in the filming of the movie, until the proposal landed on the desk of Navy Secretary John Lehman, himself a A-6 bombardier-navigator in the Naval Reserve. Lehman instantly recognized the public relations and recruting value of the film, and gave the project the green light. The rest, as they say, is history. As an Air Force officer in the mid-1980s, I heard more than a few blue suiters wonder why we couldn't get "our own Top Gun." In the not-too-distant future, the best place to see an F-14 in flight will be on your DVD player or DVR, and not in the skies over a carrier or a naval air station.

Today's passing is also bittersweet because it signals the pending depature of the Grumman Corporation from carrier aviation. For decades, whenever the Navy wanted a fighter for the fleet, it turned to the firm from Long Island that produced such legendary aircraft as the F4F Wildcat and F6F Hellcat, that helped win the naval war in the Pacific against Japan. The Tomcat was the last in a long line of Grumman fighters that defended the fleet--and freedom--for more than half a century. Grumman merged with Northrop a few years ago, part of the consolidation of America's defense contractors. Today, the firm earns most of its money from naval shipbuilding, information systems and support of the JSTARS and B-2 programs for the Air Force. As long as the Tomcat lingers in the naval reserve, Grumman will still be involved in the F-14 program, but the firm will never produce another naval fighter as an independent entity.

The Tomcat's return to Oceana will be reserved for family, friends, Navy officials and members of the news media. But thousands of aviation buffs around the world--myself included--will be there in spirit. While I bleed Air Force blue and will remain forever convinced that the F-15 is a better air superiority fighter, I also understand that the Tomcat is also a magnificent bird, born of the notion that freedom is worth defending, by men (and now, women) who fly elegant, powerful machines from the rolling, heaving flight deck of an aircraft carrier, often in hostile waters.

The F-14 was--and is--a uniquely American symbol of pride, ingenuity, and freedom, wrapped in a sleek package of steel and titanium. And if you happen to be near Oceana today, scan the skies and listen for the unmistakable sound of freedom. For the end of an era is at hand. 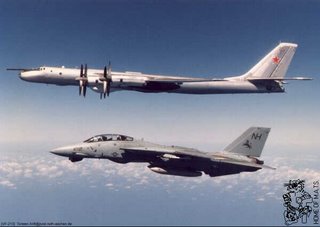 In this file photo, a Tomcat from VF-213 (Black Lions) escorts a Russian TU-95 Bear bomber. VF-213 is one of the Navy's two remaining active duty F-14 squadrons that returned from their last combat deployment on March 10, 2005.

Photo courtesy: The F-14 Tomcat Reference Work.
Posted by Unknown at 8:24 AM

Astonishing to think that the Navy brass didn't recognize the critical air combat climax as a reprise of the very real actions of O'Hare, of Medal of Honor and Chicago Airport fame.

The script followed O'Hare's downing of six Bettys right down the line. Just the aircraft and ships had been updated.

BTW the climax where the ships company floods the flight deck while the Captain proclaims the pilot a hero... straight from the O'Hare event.

In the actual battle the final Betty was shot down within sight of the shipscompany and went into the drink so close that they thought that the Japanese pilot was suiciding into the flight deck.

O'Hare is a true naval legend. However, I've heard two stories about his background. One version states that his father was a mob lawyer for Capone, and O'Hare's service was motivated (in part) by a desire to restore the family name; the other is just the opposite; that the elder O'Hare was a prosecutor who was killed by Capone's gang.

You've got a real eye for art imitating life. I didn't learn of the similarities between Top Gun and O'Hare's actions until about a decade after I saw the film--and I'm a supposed WWII buff.

Both are true, somewhat:

Eddie turned on Al, so says the G'man who did Al Capone in.

The F-14 has always been my favorite military jet (tough I have always liked the A-10 warthog as well). Maybe when I'm rich I can buy one as surplus.