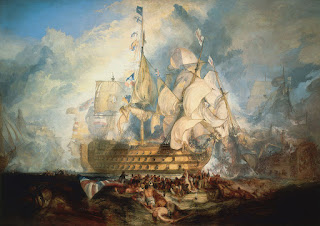 J.M.W Turner's famous painting of the Battle of Trafalgar (1805).  The Royal Navy's pending loss of anti-ship missiles on surface combatants will force a return to closer-range engagements, with potentially deadly consequences (Wikipedia image)

Just another, sad, reminder that Britannia no longer rules the waves.

The Royal Navy--which set the sea power standard for centuries--has announced plans that will further reduce its combat power and leave its ships vulnerable in potential engagements with Russian, Chinese and even Iranian vessels.

From the UK Telegraph:

Royal Navy warships will be left without anti-ship missiles and be forced to rely on naval guns because of cost-cutting, the Ministry of Defence has admitted.

The Navy’s Harpoon missiles will retire from the fleet’s frigates and destroyers in 2018 without a replacement, while there will also be a two year gap without helicopter-launched anti-shipping missiles.

Harpoon missiles are unlikely to be replaced for up to a decade, naval sources said, leaving warships armed only with their 4.5in Mk 8 guns for anti-ship warfare. Helicopter-launched Sea Skua missiles are also going out of service next year and the replacement Sea Venom missile to be carried by Wildcat helicopters will not arrive until late 2020.

Without the Harpoon, the strike range of Royal Navy frigates and destroyers will be effectively reduced by 75%.  The U.S.-built Harpoon, introduced more than 30 years ago, can hit surface targets up to 80 miles away.  Without that capability, RN combatants will be forced to rely on their deck guns, which have a maximum range of 17 miles.

Needless to say, senior British naval officials, past and present, are more than a bit concerned:

Rear-Adml Chris Parry, said: "It's a significant capability gap and the Government is being irresponsible. It just shows that our warships are for the shop window and not for fighting."

Lord West of Spithead, a former First Sea Lord, said: “This is just another example of where the lack of money is squeezing and making the nation less safe.

“We will have this gap of several years without missiles. Well, that’s fine if you don’t have to fight anybody in the meantime.”

The problem, of course, is that we're entering an era when global sea lanes are becoming a contested environment.  Russia is rebuilding its fleet from the ruin of the early 90s and recently deployed a carrier battle group to the eastern Mediterranean, to support operations in Syria.  China is building its own blue-water navy, and will have 4-5 carrier battle groups (with commensurate power-projection capabilities) within the next 10 years.  Even regional powers like Iran and North Korea have sea and shore-based anti-ship missiles that can out-range the deck guns of Royal Navy surface vessels.

To be fair, the Royal Navy still has strike options beyond a 4.5-inch naval round.  British attack subs, like their USN counterparts, are equipped with Tomahawk Land Attack Missiles (TLAM), with a maximum range of up to 1,500 miles, depending on the variant.  But the TLAM is most effective against fixed targets, not maneuvering ships, and U.S. plans to halt its production will limit availability for the RN in the future.

Another strike option is based on Great Britain's two, new fleet carriers, the HMS Queen Elizabeth and the HMS Prince of Wales.  The largest warships ever built in the UK, the carriers will embark an air wing that includes F-35 Lightning IIs and helicopters capable of attacking surface targets.  But the weapons employed on those fixed and rotary-wing assets are range-limited, and the aircraft would have to run the gauntlet of advance air defenses (on Russian and Chinese ships) to deliver their ordnance.  And there are a number of operations where Royal Navy destroyers and frigates will not be operating with a carrier.

What to do in the decade between retirement of the Harpoon and the arrival of replacement weapons? The Brits can increase joint ops with the U.S. Navy, which will retain an anti-ship missile capability for the foreseeable future.  But even the USN's position is far from optimum; the Harpoon variants in widest service are older models and vulnerable to anti-missile defenses.  Work on a replacement (the Long-Range Anti-Ship Missile, or LRASM) is in development, and won't reach the fleet for years.

Making matters worse, the range of naval strike aircraft is also dropping, thanks to limitations of the F/A-18 airframe and dwindling tanking capabilities within the fleet, so USN Super Hornets and the F-35 will have to run the same air defense gauntlet to get a crack at the surface combatants of peer/near-peer competitors.  Meanwhile, both Russia and China have fielded advanced, supersonic anti-ship missiles (most notably, the SS-N-22 Sunburn) and Beijing has invested heavily in the DF-21, a ballistic system widely touted as a "carrier killer."  Collectively, these systems could create operational "no go" zones for U.S. and allied naval groups, impacting our ability to control global sea lanes.

That's not to say that deck guns are completely worthless.  They're still quite useful in supporting troops ashore--as long as you can dodge anti-ship missiles launched from coastal batteries.  But even "revolutionary" gun technology has its limitations.  Case in point?  The Long-Range Land Attack Projectile (LRLAP), developed for the 155mm main gun on the USN's Zumwalt-class destroyers.  While LRLAP is extremely accurate, it's also very pricey at roughly $1 million a round.

The projectiles are so expensive, in fact, that the Navy has cancelled the planned buy of 2,000 rounds, to be divided among the three Zumwalts that will be built.  A small number will be produced for testing, but the idea of using the weapon to support Marines ashore seems like a pipe dream. Needless to say, the Royal Navy won't be looking at its own version of LRLAP to compensate for Harpoon's retirement.

In the interim, the RN may have to dust off employment manuals from the eras of Lord Nelson and Admiral Jellicoe.  As we noted on Twitter (@NateHale), Royal Navy surface engagement tactics from 2018 on may look something like this:

4.  Distribute cutlasses, small arms and prepare to board!

And the USN doesn't have much room to brag.  As our favorite naval blogger, Cdr Salamander, recently observed, the number of Burke-class DDGs that can no longer fire a Harpoon is both surprising and alarming.