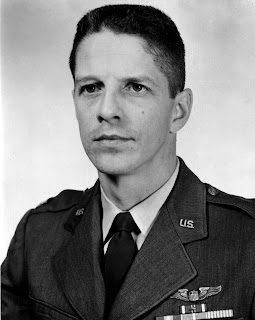 USAF Major Rudolf Anderson, who died when his U-2 was shot down over Cuba on 27 October 1962.  The event pushed the U.S. and the Soviet Union closer to nuclear war; intelligence information discovered later suggests that Fidel Castro may have played a key role in the incident (USAF photo via Wikipedia)


Various pundits and politicians--as they often do--made fools of themselves over the weekend, offering effusive praise for Cuban dictator Fidel Castro, who finally assumed room temperature at the age of 90.

El Commandante was a hero to leftists around the world, who conveniently ignored his real record as a brutal despot who killed thousands in his gulag, and thousands more through the deprivations that come with a failed, socialist economic system.  Castro was hailed for Cuba's "advances" in education and health care, but such claims masked the reality of everyday life in Fidel's Workers Paradise. The Cuban leader gave everyone a taste of poverty, with little access to basic consumer goods and services that were readily available in other Latin American countries.  No wonder that so many took to the seas in rickety boats, trying to escape Castro's living hell.  We may never know how many drowned attempting to cross the Florida Strait, or disappeared in the regime's prisons after being recaptured by the Cuban coast guard.

Of all the tributes to Castro, none was more pathetic than the eulogy offered by Justin Trudeau, Canada's liberal prime minister.  In a statement released shortly after the dictator's death, Mr. Trudeau noted that the Cuban dictator was a "controversial" figure, but praised his "tremendous dedication and love for his people."  That was too much for Senator Ted Cruz of Texas; the son of a Cuban immigrant who was forced to flee the island because of Castro's tyranny.  As Mr. Cruz tweeted:


Unfortunately, President Obama's comments on Castro's passing weren't much better.  In an official statement, Mr. Obama whitewashed the dictator's decades of killing and enslaving the Cuban people, unwilling to say anything that might jeopardize the recent "normalization" of relations between Havana and Washington.

There were celebrations in Miami (and elsewhere) when Castro's death was announced, and rightfully so.  Virtually everyone in the Cuban exile community--or a member of their family--experienced Fidel's terror first-hand.  For them, his appointment with the Grim Reaper was long overdue, and they can take some solace in the thought that Castro is receiving his eternal punishment.

The same holds true for the friends and family of U.S. military members who perished as a result of Castro's actions.  That list includes eleven airmen who were crew members on RB-47 reconnaissance aircraft that went down during and after the Cuban missile crisis in 1962.  The same holds true for members of the Alabama Air National Guard who were shot down during the Bay of Pigs invasion in 1961.  On temporary assignment to the CIA, they flew B-26s that provided air support for Cuban exiles trying to establish a beachhead and begin the liberation of their country.  The Alabamians died while President Kennedy refused to commit a much larger American force to the fight.  Their sacrifice wasn't acknowledged by the CIA until almost 20 years later, and the agency refused to comment publicly on their mission until the late 1990s.

Castro's passing may also offer some closure for the family of USAF Major Rudolf Anderson, who found himself literally in the cross-hairs of the missile crisis, and became the only American to die in action over Cuba.  A graduate of the Air Force ROTC program at Clemson University, Anderson earned his pilot wings and flew F-86s during the Korean War.  Five years later, he was selected for the U-2 program and quickly established himself as one of the best at piloting that difficult and unforgiving aircraft.

When the missile crisis began, Anderson was part of the 4080th Strategic Reconnaissance Wing, based at Laughlin AFB, Texas.  With more than 1,000 hours in the "Dragon Lady," it was a given that Anderson would be among the pilots flying the daily, high-altitude missions over Cuba.  Launching from their base in west Texas, the U-2s would head east across the Gulf of Mexico.  Over Cuba, the U-2 pilots would typically fly a long, looping track over suspected missile sites and other facilities before heading north and recovering at McCoy AFB, near Orlando, Florida.  Missions staged from McCoy followed a similar path, with the pilot flying on to Laughlin after photographing targets in Cuba.

The U-2 missions began in early October and by the mid-month, photographs collected by the U-2 confirmed what the CIA had suspected.  Russia had placed nuclear-capable, intermediate range missiles in Cuba, placing much of the CONUS under the threat of nuclear attack.  As tensions mounted and the U.S. implemented a naval blockade, the U-2 flights continued, providing valuable intelligence for President Kennedy and his military advisers.

But there were growing concerns about the potential vulnerability of the U-2s and their pilots.  Along with the nuclear delivery systems, the Russians had also deployed SA-2 surface-to-air missiles.  Two years earlier, an SA-2 downed a CIA U-2 over the Soviet Union, leading to the capture of pilot Francis Gary Powers and an embarrassing international incident.  As the crisis wore on, there was mounting fear that a Cuba-based SA-2 would again engage a U-2.  At altitude, there was little a pilot could do, except fly an S-shaped maneuver, designed to increase the "miss" distance between his aircraft and the early-generation SAM.

Anderson was on the flying schedule for 27 October, one of four U-2 flights scheduled for that day.  Electronic intelligence (ELINT) information confirmed a growing threat to American recce aircraft and three of the U-2 missions scrubbed.  But senior officers at Strategic Air Command (which controlled Air Force U-2 assets) decided to go ahead with Anderson's sortie.  He launched from McCoy, following a mission profile that would carry him over key locations in eastern Cuba, then on to Laughlin.

In the early 1960s, most military pilots had nothing more than their eyeballs to detect enemy missile launches.  The CIA had developed and installed an early radar warning receiver (RWR) in the cockpit of their U-2s.  When a tracking radar (like the one associated with the SA-2) was detected, a yellow light illuminated on the device.  A missile launch was indicated by a bright red light.

American ELINT assets detected a spike in SA-2 radar activity from eastern Cuba, including the site near Banes.  But the RB-47s and other platforms monitoring the signals had no way of providing warning to the U-2 pilots.  Given the escalating SAM threat, the Air Force "borrowed" RWR-equipped U-2s from the CIA, and it is believed Anderson was piloting one of those aircraft on the 27th.

Unfortunately, the spooks were missing key pieces of the puzzle--information that would have likely prompted cancellation of Anderson's mission.  The night before his flight, Fidel Castro visited Russian air defense headquarters in Cuba and urged commanders to put the network on combat status.  Russian officers, increasingly worried about a potential U.S. attack, needed little encouragement.  That's why American ELINT operators noted an increase in "Spoon Rest" and "Fruit Set" radars at SA-2 sites, as Anderson passed overhead.

But Castro's involvement in the U-2 incident may have gone beyond that meeting with Russian air defense commanders.  In 1964, almost two years after the missile crisis, cryptologists at NSA broke a Soviet military cipher and began working their way through old message traffic, hoping to glean additional insights about Russian operations.  A number of messages originated with Soviet forces in Cuba, during the nuclear face-off with the United States.

Some of that traffic provided new--and startling--insights about the status of Soviet air defenses in Cuba.  Several messages alluded to a firefight at the SA-2 site at Los Angeles, near the Cuban naval base at Banes.  Russian commanders at the scene reported the SAM complex had come under fierce attack and their troops responded.  The attackers were never identified, but with no reports of internecine combat among Soviet troops on the island, the assault was almost certainly carried out by Cubans, presumably under the orders of Fidel Castro.

Other reports suggest that Cuba gained joint control of the SAM sites about the same time, a significant change from established Russian operating procedures.  Was the sudden change a product of Fidel's visit to Soviet commanders and the apparent attack on the Banes SA-2 complex?  The answer to that question remains unclear, as does the issue of who was in control when the site launched a pair of missiles against Anderson's U-2.  At least one exploded near the aircraft; shrapnel punctured the pilot's pressurized flight suit; the rapid decompression killed him in a matter of seconds.  Wreckage of the spy plane landed near the SAM complex; some of it remains on display to this day at military museums in Cuba.  Major Anderson's body was returned to the U.S. a few weeks later, after the crisis ended.  He is buried in his hometown of Greenville, South Carolina, where an F-86 on static display serves as a monument to Anderson's life and sacrifice.

The issue of who was in charge at Banes on that fateful day is critical.  Word of the shoot down quickly made its way to the White House, where JFK and his advisers assumed the Russians made the decision on their own, dramatically escalating the crisis.  And to be fair, the order to fire was made by Moscow's senior air defense officer on the island.  But if his decision was influenced by Castro's lobbying--or a Cuban assault on the Banes complex--it puts his directive in a completely different context.  Subsequent interviews with Cuban and Russian participants have provided confirmation--and denials--of the attack on Banes, and the role of Fidel Castro.  It remains one of the unanswered questions regarding the darkest moment of the missile crisis.

Despite the loss of the U-2 and Major Anderson, the U.S. never lost interest in aerial reconnaissance over Cuba, and tweaking Fidel whenever the opportunity arose.  In the 1980s, as a junior intelligence officer, I met an F-4 squadron commander with a background in the SR-71.  On one occasion, he amazed us with 8mm "home movies," shot from the cockpit of the Blackbird (amazing).

And, he would gladly tell the story behind another of his prized possessions.  It was a photograph of Castro, greeting Soviet leader Leonid Brezhnev as he stepped off the plane in Havana.  Both men are shaking hands, but they are looking straight up.  Their skyward gaze was caused by our squadron commander, who was at the controls of an SR-71 over Cuba that day.  Brezhnev's arrival ceremony was interrupted by the distinctive double sonic boom of the Blackbird, leaving Fidel to explain why the Yanqui air pirates were operating with impunity in his airspace.

In some respects, those flights--which went on for years--provided a measure of justice for Major Anderson and the other U-2 pilots who risked their lives over the island during the missile crisis.  Our departure from Cuban skies was only temporary.  When we returned, it was with a vengence, and there was nothing El Commandante could do about it.