If a Picture is Worth a Thousand Words...

..then the one below should remove any doubts about the gravity of the current situation in the Middle East, and the failure of U.S. leadership: 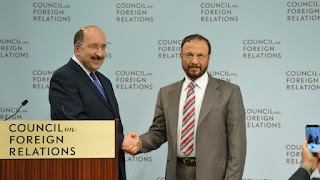 The gentleman on the left is Dore Gold, the former Israeli Ambassador to the U.S. who was recently named Director-General of his country's Foreign Ministry.  He is shaking hands with Anwar Majed Eshki, a retired Saudi general who served as a top adviser to Prince Bandar bin Sultan, the kingdom's long-time ambassador to Washington.

Gold and Eshki spoke yesterday at the Washington office of the Council on Foreign Relations (CFR).  Their joint appearance confirmed rumors that have been circulating for months; alarmed at Iran's efforts to develop nuclear weapons and dominate the Middle East, Israel and Saudi Arabia have been meeting secretly to discuss various options for dealing with Tehran.

Since the beginning of 2014, representatives from Israel and Saudi Arabia have had five secret meetings to discuss a common foe, Iran. On Thursday, the two countries came out of the closet by revealing this covert diplomacy at the Council on Foreign Relations in Washington.

Among those who follow the Middle East closely, it's been an open secret that Israel and Saudi Arabia have a common interest in thwarting Iran. But until Thursday, actual diplomacy between the two was never officially acknowledged. Saudi Arabia still doesn't recognize Israel's right to exist. Israel has yet to accept a Saudi-initiated peace offer to create a Palestinian state.

It was not a typical Washington think-tank event. No questions were taken from the audience. After an introduction, there was a speech in Arabic from Anwar Majed Eshki, a retired Saudi general and ex-adviser to Prince Bandar bin Sultan, the former Saudi ambassador to the U.S. Then Dore Gold, a former Israeli ambassador to the United Nations who is slotted to be the next director general of Israel's foreign ministry, gave a speech in English.

Both were blunt in their assessments of the threat posed by Iran:

Eshki was particularly alarming. He laid out a brief history of Iran since the 1979 revolution, highlighting the regime's acts of terrorism, hostage-taking and aggression. He ended his remarks with a seven-point plan for the Middle East. Atop the list was achieving peace between Israel and the Arabs. Second came regime-change in Iran. Also on the list were greater Arab unity, the establishment of an Arab regional military force, and a call for an independent Kurdistan to be made up of territory now belonging to Iraq, Turkey and Iran.

Gold's speech was slightly less grandiose. He, too, warned of Iran's regional ambitions. But he didn't call for toppling the Tehran government. "Our standing today on this stage does not mean we have resolved all the differences that our countries have shared over the years," he said of his outreach to Saudi Arabia. "But our hope is we will be able to address them fully in the years ahead."

Pay little attention to the usual boilerplate about "long-standing differences" between Saudi Arabia and Israel, or the need for a Palestinian solution as a precursor to peace.  Fact is, the type of public event that occurred yesterday at the CFR would have been unthinkable a few years ago.  To be sure, there has long been a certain amount of back channel communication between Jerusalem and Riyadh, including the limited sharing of intelligence information.  But the notion of a senior Israeli diplomat sharing the stage with an influential member of the Saudi defense establishment--and the meeting generating virtually no criticism outside of Iran--that's a reflection of just how dire the current situation has become.

Not long ago, both Saudi Arabia and Israel would have looked to their closest ally--the United States--for leadership in dealing with the Iranian threat.  But with President Obama determined to reach a badly flawed nuclear agreement with Tehran, other nations in the region--those threatened by the mullahs geopolitical ambitions--are looking at new security alliances as a hedge against our inability and unwillingness to take on the Iranians.

And the discussions between the Saudis and Israelis go much deeper than the five meetings between Mr. Gold and General Eshki.  Earlier this year, there were credible reports on discussions of a possible Israeli strike against Iranian nuclear facilities, with potential routing through Saudi air space.  Thursday's public event with the Saudi and Israeli officials was aimed at conveying a clear message: to preserve their own security, both Jerusalem and Riyadh are willing to form alliances of convenience with long-standing foes, now viewed as posing a far lesser threat than Iran.

It also seems likely that the talks between Israel and Saudi Arabia have the tacit approval of other nations in the Gulf Region.  They are just as worried about Iran as the Saudis, hence the near-total lack of criticism about the now-public talks.  Indeed, there is a very real possibility that other Gulf nations are pursuing their own, back-channel communications with the Israelis, unless the Saudis have been designated to speak for the entire GCC.

This doesn't mean the IAF would get basing rights at Dhahran or Kuwait City in preparation for an attack on Iran's nuclear sites.  But overflight rights are almost a certainty, and the Saudis, Kuwaitis, Qataris and others might be willing to make other concessions, such as allowing Israeli attack subs to operate in their waters, putting them in position for cruise missile strikes against Iran--and search-and-rescue missions after the strike.  Riyadh might also extend financial aid to countries (such as Azerbaijan) who already have close ties with Israel, and may have offered basing rights to the IDF, which would allow Israel to mount larger, sustained attacks against Iranian nuclear facilities.  Jerusalem considers Baku its closest ally in the Muslim world and there's a certain irony in that, given that 85% of its population is Shia--the highest concentration of any country outside Iran.

Not only are these alliances a reflection of perceived American weakness, they could also trigger events over which Washington has no influence.  At some point, the Israelis will determine that Iran has reached the point of no return and launch military operations against Tehran, with the tacit or open support of Saudi Arabia and other Arab countries.  That will lead to a wider regional conflict that will be even more difficult to contain, le alone prevent.  And, there is the specter of Riyadh joining the nuclear club (with weapons supplied by Pakistan), once Iran's nuclear capability has been affirmed.

As President Obama is now discovering, there is a price to be paid when America fails to lead.  The Israelis and Saudis are examining options for dealing with Iran, based on the premise that Washington won't act, or engages in actions (i.e., the nuclear deal) that actually make matters worse.  At this point, the president seems completely disengaged on issues related to the Middle East--with the exception of his "legacy" talks with Tehran.  Amazingly, Mr. Obama doesn't seem to understand that his "initiative" will set the entire region on fire, and possibly lead to a nuclear conflict.  And if it does, he calculates, it will be something else for his successor to deal with.

Little wonder that Israel and Saudi Arabia have suddenly discovered they have so much in common.

Democracy is the best method yet devised for ensuring that people get the government they deserve. That the American people elected and re-elected Barack Obama as President proves that the United States no longer deserves any sort of world leadership role. We should expect our former allies to look after their own interests, at the expense of ours if necessary, and our adversaries to treat us with the contempt we've earned by our collective foolishness.

" a call for an independent Kurdistan to be made up of territory now belonging to Iraq, Turkey and Iran."

Is that a direct quote or maybe some journalist thought? If a direct quote that is a really big jump for Saudi Arabia to not just support a Independent Kurdistan but one that doesn't just include the current quasi independent regions of once Syria/Iraq but also includes Iran and Turkish territory? I could get a Saudi looking to stoke some flame in Iran but Turkey?

Eli Lake is one of the better reporters on the national security beat, so I don't think he made up the quote on Kurdistan. The Saudis realize their survival is at stake and they can't count on the U.S. for help. They view the Kurds as the only group (outside of Iran) that is capable of taking on ISIS, and if it means supporting an independent Kurdistan--and bankrolling the military effort--Riyadh is more than willing to sign on. Also find it interesting the Saudis have been busy in Azerbaijan, which is overwhelmingly Shia. But the Azeris don't like the Iranians, so they're aligning themselves with the Saudis and Israelis.

Exigencies make for some rather interesting partnerships, and this is just the tip of the iceberg. The Israelis, the Saudis and the rest of the GCC realize its every man for himself as America essentially exits the Middle East stage. Riyadh will almost certainly go nuclear, and several other Gulf states will follow, by purchasing finished weapons from Pakistan. Israel will strike Iran in the very near future and the entire region will go up in flames.

I love that picture. The Saudi is clear thinking, "Ew, I'm touching a Jew." While the Israeli surely is thinking,"Hah! I have you now!"