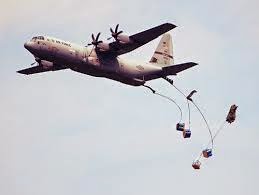 
The Air Force is taking a bit of heat, for a (slightly) errant airdrop to Kurdish forces defending the Syrian town of Kobani.  In recent days, the Kurds have been on the advance against ISIS, taking back more of the city, which is located along the Turkish border.  But, with friendly forces running short on arms, ammunition and medicine supplies, the USAF dispatched three C-130 transports, which dropped 27 bundles of supplies.

Unfortunately, one of the bundles drifted away from the drop zone and wound up in the hands of ISIS terrorists.  From the Daily Beast:

"An ISIS-associated YouTube account posted a new video online Tuesday entitled, “Weapons and munitions dropped by American planes and landed in the areas controlled by the Islamic State in Kobani.” The video was also posted on the Twitter account of “a3maq news,” which acts as an unofficial media arm of ISIS. The outfit has previously posted videos of ISIS fighters firing American made Howitzer cannons and seizing marijuana fields in Syria."

The two-minute video begins with footage of the bundle, still attached to its parachute, lying in an open area in ISIS-controlled territory near Kobani.  The rest of the video shows ISIS fighters opening boxes from the bundle, showing what appears to be hand grenades and RPG rounds.

While the off-target supply bundle gave ISIS a minor propaganda coup, it also highlighted a grim reality for the terrorists.  When the U.S. musters the willpower, we have the ability to drop tons of supplies to the Kurds, and successfully deliver 95% of that aid to friendly forces, even in a semi-urban environment.  And there is virtually nothing ISIS can do to stop it, aside from praying that more bundles to blow off-course, and the Obama Administration will continue its lackadaisical prosecution of the Syria campaign.  A sudden flurry of airstrikes late last week put the terrorists on the defensive and allowed the Kurds to re-take lost territory; the supply effort gave them another boost.  Unfortunately, there is no assurance the U.S. will sustain that level of effort.

From a tactical perspective, there may be some debate as to how the bundles were delivered.  Obviously, the C-130 is ideally suited for the mission; Herks have been conducting airdrops in all types of environments for more than 50 years, and their crews are well-practiced in the art.  The Air Force will only say that the mission took about three hours to complete, and only a handful of aircraft wre involved.

Interestingly, the Air Force has not revealed the C-130 model that conducted the mission over Kobani.  In recent years, the service has been purchasing the advanced "J" model which offers a number of upgrades over previous variants, including more powerful Rolls-Royce turboprop engines, distinctive, six-blade Dowty propellers, all-digital avionics, and reduced crew requirements.

The airlift version of the C-130J has only a three-person crew (pilot, co-pilot and loadmaster), compared to the five-member flight crew found on earlier transport variants.  Thanks to improvements in navigation gear and systems control, the J-model eliminates the navigator and flight engineer positions found on E/H models, though some special mission platforms still maintain the navigator, now referred to as a "combat systems officer."

Navigators played a critical role in airdrops conducted by older C-130s; they were responsible for keeping the aircraft on its desired track and on-time, ensuring that supply bundles or paratroopers were "dropped" at exactly the right moment.  The nav's presence allowed the pilots to concentrate on flying the aircraft, while the engineer kept an eye on the Herk's systems (and maintained visual look-out).  In the cargo bay, loadmasters performed the tricky ballet of getting the supply pallets (or airborne troops) safely out of the aircraft.

With elimination of the nav/CSO position on J-model airlifters, the navigation, timing and look-out duties fall on the pilots, while a single loadmaster is responsible for cargo in the back.  On most airdrop missions, a second loadmaster is assigned, but it's still quite a change from the larger crews on H-model airlifters, and more than a few in the Herk community view the nav..err, CSO, as a necessity for airdrop missions.

While the Air Force has been buying J models for more than a decade, it still operates a number of older E/H models, particularly among guard and reserve units that are integrated into the total force.  So, it's quite possible that the airdrop was conducted by an earlier-model C-130s, with a full crews.  It's also worth noting that airdrops are also subject to factors that are beyond the crew's control, such as a sudden shift in the winds, or a parachute failure.

Getting 26 of 27 bundles into relatively small drop zones is pretty darn good, so the mission was definitely a success.  Our real problem is persistence; the Kurds can always use more close air support, along with weapons and ammunition for their troops on the ground.  We have the means to get it to them.  The only thing lacking is the political will.