More Medevac from the Hot Zone 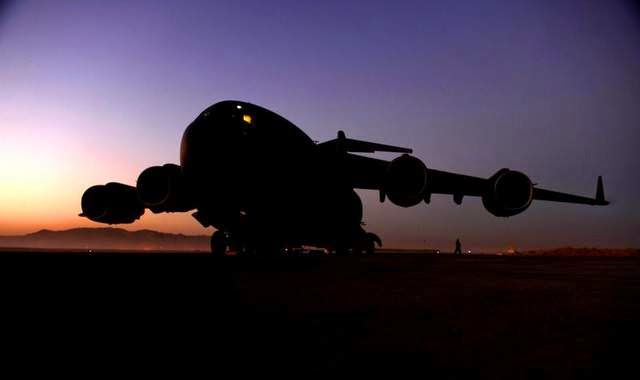 An Air Force C-17.  The Pentagon plans to acquire airborne isolation chambers which can be loaded onto the transport and airlift up to a dozen troops or aid workers infected with Ebola, to treatment facilities around the world.  (USAF photo via Army Times)

***UPDATE//28 October//Fox News has obtained a draft State Department memo outlining plans for bringing non-citizens to the U.S. for Ebola treatment--a document the government has tried to disavow. This revelation raises new questions about the actual purpose for those military isolation pods, and who will be evacuated from affected areas.
***

When the Obama Administration announced plans to send troops to West Africa to battle the Ebola crises, we were told that military personnel would face minimal risks.  They wouldn't be treating actual patients we were assured; instead, the mission would focus on building new treatment centers, training local health care workers and handling related tasks, including logistics and security.

So, if the chances of contracting the deadly disease are low, why is the Pentagon developing its own, portable isolation units that can be loaded into military transports, and remove more infected individuals from the hot zone?

From USA Today, courtesy of Drudge:

As more U.S. troops head to West Africa, the Pentagon is developing portable isolation units that can carry up to 12 Ebola patients for transport on military planes

The Pentagon says it does not expect it will need the units for 3,000 U.S. troops heading to the region to combat the virus because military personnel will not be treating Ebola patients directly. Instead, the troops are focusing on building clinics, training personnel and testing patient blood samples for Ebola.

"We want to be prepared to care for the people we do have there just out of an abundance of caution," Defense Department spokeswoman Jennifer Elzea said.

The Pentagon's transportation system will allow the Air Force to use C-17 or C-130 transport planes to carry up to eight patients on stretchers or 12 patients who are able to walk, said Charles Bass, a Defense Department chemical engineer working on the project.

Elzea said the cost of the units couldn't be provided as the final contract for the project is still under negotiation.

Bass, a former Army officer, said the units are key to providing peace of mind to U.S. troops in Africa.
"It's important when you're on deployment that you feel that someone has your back," he said. "(It) adds confidence to the people who are deployed."

Recent evacuation flights of western aid workers and journalists with Ebola have been conducted by Phoenix Air, a private firm that has the only medically-approved means of air transport for patients with the deadly disease.  The company charges $200,000 for each flight, and has conducted a dozen Ebola medevac missions since July, flying westerners from Africa to treatment centers in the U.S. and Europe.

Why not stick with Phoenix Air?  After all, the risk for deployed personnel is said to below, and the Cartersville, Georgia firm has obvious expertise in the dangerous mission--and a long-standing relationship with DoD.  Among other services, Phoenix Air provides range surveillance, electronic attack and radar/communications jamming to the U.S. Navy and other military clients.  The Pentagon can certainly afford the price tag, and the potential evacuation of military personnel is already covered under an existing contract between the aviation firm and the U.S. State Department.

Apparently, the Defense Department wants the capability to transport more patients on each flight--if necessary.  The isolation chamber on Phoenix Air's specially-equipped business jet can handle only a single individual, under the care of a doctor and two nurses wearing full protective gear.  As reported by USA Today, chambers that will be fitted into a C-130 or C-17 can accommodate up to 12 ambulatory patients, or eight on stretchers.

This much is certain: the military option won't save the government any money.  At an estimated operating cost of $23,000 per flying hour, a round-trip C-17 flight between the east coast and West Africa will run the taxpayers $414,000--and that doesn't include the cost of the isolation chamber, or the medical crew required for the mission.

To be fair, creating the Air Force medevac option makes a certain degree of sense.  With the Ebola crises expected to worsen in the most-affected areas, requirements for airlifting western aid workers and military personnel may increase beyond the capabilities of Phoenix Air.  If saving your life requires transport to a hospital in the United States or Europe, the arrival of a specially-equipped Hercules or Globemaster III would be a welcome sight, indeed.

On the other hand, the Pentagon's crash program to develop this capability raises new questions about the situation in West Africa, and the threat being faced by our military personnel.  DoD would not invest the time and money to build airborne isolation chambers--and train crews for the Ebola medevac mission--if there was no need for the expanded capability.  This may be nothing more than preparing for a worst-case scenario, but (given the government's track record on Ebola so far), developing these mission "assets" is hardly reassuring when it comes to the potential spread of the disease, and our service members becoming infected.
***
ADDENDUM:  While the U.S. government refuses to implement mandatory isolation requirements for travelers coming from West Africa, it's a different story for our military.  CBS News reports that 11 soldiers who just returned from Liberia--including the commander of U.S. Army in Africa--have been placed in isolation for 21 days at Vicenza, Italy.  The Pentagon calls it "enhanced monitoring" and it will apparently be standard policy for all military members returning from the Ebola mission.

They are expecting numerous Ebola cases among the troops, and need to have some means of large scale evacuations.

It would be nice if someone at DoD would level with the public--and the troops being sent on that mission.

When you have a moment, drop me at e-mail at icspook86@hotmail.com