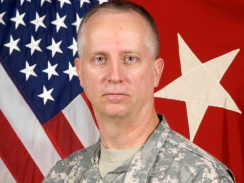 Coming soon to a basement office at Fort Belvoir?  Brigadier General Neil Tolley has been replaced as commander of U.S. special ops forces in South Korea, after claiming that allied SOF teams have conducted missions in North Korea in the past (U.S. Army photo via CBS News)

General Tolley, the former commander of U.S. Special Forces in South Korea, has been replaced in that post, just weeks after he publicly stated that American and ROK SOF forces have periodically entered North Korea on spy missions.

Tolley made the claim at a conference in Florida last month.  Later, both the general and military public affairs officers tried to walk back his remarks, stating that "no" special operations forces have been sent into the DPRK.

General Tolley had served as the Army's highest-ranking SF officer in South Korea since October 2010.  Army officials described his departure as a "routine" personnel change, but Tolley was supposed to serve a two-year tour.  His early departure--coupled with the claim about SOF missions in North Korea--was probably enough to end Tolley's Army career.  Readers will note that the Army announcement did not disclose Tolley's new assignment, a sure sign he's being dispatched to a "special assistant" backwater job, where he will bide his time until retirement.

And it's hard to disagree with the Army's decision.  Cross-border operations in Korea are an extraordinarily sensitive topic, since they represent a violation of the 1953 cease-fire that ended the Korean War.  Officially, the U.S. and South Korea don't send SOF teams north, although there have been rumors about such operations for years.  By denying that such missions take place, Washington and Seoul can score propaganda points when North Korean teams are captured in the south.

Additionally, the DPRK represents a very difficult target for any infiltration team.  Americans don't exactly blend in well with the local populace, and even ROK SOF teams are a difficult fit, because the typical South Korean is noticeably taller and better nourished than a DPRK soldier or civilian.  North Koreans are not allowed to travel freely in their country, but they are required to report any suspicious activity.  Members of the DPRK's large special ops command also practice counter-SOF missions on a regular basis, increasing the difficulty of getting a SOF team into (and out of) North Korea.

That's not to say it hasn't been done.  Indeed, General Tolley isn't a man given to idle boasts, and during his original remarks, he talked about North Korea's vast network of tunnels and other underground facilities (UGFs).  Some of his comments seemed to be based on ground observations that were carried out by allied special forces teams. With that information, it will be easier for Pyongyang to determine how allied SOF elements got into their country and egress routes used for escape.  Put another way: it just became much more difficult to mount such operations in the future.

But their is a touch of hypocrisy in the sacking of Neil Tolley.  For openly discussing covert missions and capabilities, General Tolley's career is (likely) at an end.  Meanwhile, senior members of the Obama Administration share all sorts of details about the SEAL raid that killed Osama bin Laden, and none have been dismissed from their posts.  Go figure.

In fact, it looks like the administration will discuss almost anything classified--as long as it can assist in Mr. Obama's re-election bid.  Producers preparing a film about the bin Laden raid were given "unprecedented access" to military and civilian officials, raising fears that sensitive operational details might be divulged, jeopardizing the success of future missions.  The administration's decision infuriated members of the Naval Special Warfare community, and rightfully so.  For obvious reasons, the SEALs prefer to operate in the shadows and they don't want politicians offering up information that might get them killed.

And just this week, Senate Democrats--you read that right--Democrats--expressed concern about national security leaks regarding a recent, reported cyber attack against Iran's nuclear facilities.  From The Hill: .


The Democratic chairwoman of the Senate Intelligence Committee on Tuesday expressed worry that leaks to the press about a cyberattack authorized by the Obama administration on Iran could lead to a counterattack on the United States.
Sen. Dianne Feinstein (D-Calif.) joined other senior Senate Democrats in expressing serious concerns about the leak, which detailed a cyberattack intended to hamper Iran's nuclear program. Some Republicans argue the information was leaked to help President Obama's reelection campaign.


Several Democrats noted the Iranian leak is just the latest in a series of media reports about classified U.S. anti-terrorism activity.
“A number of those leaks, and others in the last months about drone activities and other activities are frankly all against national security interests,” said Sen. John Kerry (D-Mass.), chairman of the Foreign Relations Committee. “I think they’re dangerous, damaging, and whoever is doing that is not acting in the interest of the United States of America.”

If Mr. Kerry wants to find the culprits, he should look towards the White House.  The same administration that has punished a number of lower-level "leakers" is quite happy to spill state secrets--if it advances the political cause.  Unfortunately, that's the way the game is played in Washington.  All administrations leak; only some are a bit more feckless than others.         .                  .
Posted by Unknown at 6:44 PM

The President can authorize disclosure of classified information by a designated representative, but that has to be in writing, like an executive order.

I doubt that was the case with those movie producers. They probably just Sandy Bergered it.

This is a very interesting posting, Mr. Smiley.

Unless Sheryl Crow's brain tumor is contagious, the Brig. Gen Tolley episode makes as little sense as a "single square of toilet tissue".

I refuse to take this at face value, however, unless someone in the Obama administration wants to explain how taxpayers are receiving their money's worth when a West Point grad like Tolley could make such a slip at this stage in his career:

"“The entire tunnel infrastructure is hidden from our satellites,” he was quoted as saying. “So we send [Republic of Korea] soldiers and U.S. soldiers to the North to do special reconnaissance.” The United States Defense Department and the American military in South Korea denied the report." -NYT

Gen Tolley's 'slip' may have been a sop to the DPRK to assure good behavior from Kim Jong-un before U.S. elections in November.

If Gen Tolley has not been ordered to get an MRI by now, he was probably speaking for the administration, and may soon be running for elected office in a battleground state (D).

As you have correctly observed, "...the administration will discuss almost anything classified--as long as it can assist in Mr. Obama's re-election bid."

Senator Kerry is certainly the right fellow to discuss leaks and inappropriate behavior, such as consorting with the enemy.