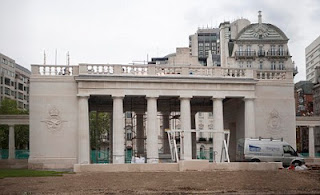 
This Thursday, Britain will correct a slight that was years in the making.  After decades of controversy, debate and false starts, a memorial to the Bomber Command crews of World War II will finally be dedicated in London.  Queen Elizabeth will lead the official party, and Britons should be thankful she has enjoyed such a long reign.  Given the political correctness that affects certain members of the Royal Family (paging Prince Charles) one wonders if the next monarch would show up for such a lightning-rod event.

Hard to believe, but sixty-seven years after the last Lancaster returned from the final bombing mission of World War II, there is outrage over the notion of honoring the crews who took the war to the German homeland.  Night after night, year after year, brave men climbed into their Stirlings, Halifaxes, Manchesters, Mosquitoes and 'Lancs, braving a deadly gauntlet of radar, anti-aircraft guns, searchlights and night-fighters to put bombs on target in Nazi-occupied Europe.

But thanks in part to revisionist history, their sacrifice of Bomber Command--which came after Luftwaffe  flattened cities like Rotterdam and Coventry--now seems less important than the suffering of German civilians on the ground.   In some circles, the RAF raids on cities such as Hamburg and Dresden are described as war crimes, and the men who planned and carried out those missions?  Nothing more than war criminals.

To give you some idea of how such thinking has affected British opinion, consider these facts: among the major elements of the British armed forces that fought in World War II, Bomber Command is the only one that was never honored with a campaign medal; its most famous leader (Air Marshal Sir Arthur Harris) was denied post-war honors and the memorial comes decades after others were dedicated.

Yet the controversy won't die.  When plans for the monument were made public in 2010, the Mayor of Dresden, Helma Orosz, publicly criticized the move and voiced her concerns to London Mayor Boris Johnson.  From Der Spiegel:   .


"The planned memorial triggered astonishment in Dresden and was judged critically by us in diplomatic terms," she told SPIEGEL ONLINE. "I am pleased that this exchange of views led to the monument now featuring an inscription commemorating the victims of the bombing war. The objections many people in Germany had to such a memorial have been taken seriously and I welcome this very much. It's a further gesture of reconciliation between Britain and Germany."

Lost in the politics are the 55,573 Bomber Command airmen who gave their lives in World War II.  All were volunteers who faced long odds of completing their operational tour.  Consider these statistics: out of  100 new aircrew assigned to bomber squadrons, 44% would die in combat; another 12% would be shot down and captured,  two would be downed but evade capture, and another three percent would be injured while on operations or active service.  Only 27%--barely one in four--would survive an operational tour.  A World War I infantry officer had better survival odds than a bomber command crew member who served between 1939-1945.

And yet, Bomber Command routinely dispatched 1,000 bombers against Nazi targets from early 1943 until the end of the war.  It was a testament to resourcefulness of British war planners, the manufacturers who delivered a steady stream of new aircraft and, of course, the crew members who headed out for Hamburg, Essen, Berlin, the Ruhr Valley and a hundred other targets, many of them never to return.

Due to the limits of bombing accuracy in that era (and the relatively poor self-defense capabilities of their aircraft), the RAF bombed at night, aiming for area targets, rather than specific facilities.  Such tactics, coupled with the use of incendiary munitions, sometimes triggered massive firestorms that killed thousands of German civilians.  As many as 45,000 died in the fire-bombing of Hamburg in the summer of 1943, and perhaps 25,000 were killed in the raid on Dresden in February, 1945.  By comparison, a U.S. fire raid on Tokyo in January, 1945 resulted in the deaths of 64,000 civilians, but that mission remains far less controversial than the great raids of Bomber Command.

But was anything gained for the effort?  The revisionists say no, pointing to German figures that show industrial production actually rose, even as the number and scale of the RAF raids continued to grow.  And clearly, Bomber Command did not achieve its secondary goal of crushing enemy morale.  Harris's desire to delivering a "knock-out" blow against the Germans in the winter of 1944 turned into a defeat for his command, which lost more than 1,000 aircrews during a four-month period.

Still, Bomber Command made tremendous contributions to defeating Nazi Germany.  British Historian Adam Tooze believes the RAF's Ruhr campaign was instrumental in a sharp drop in German steel production in 1943, causing a ripple effect in enemy arms production.  Hitler's last armaments chief, Albert Speer, credits Bomber Command with opening a "second front" years before the Normandy invasion.  Even if Bomber Command was limited in its accuracy, defending against that threat required tremendous resources, including the deployment of thousands of 88mm guns.  Scores of Allied tank crews survived the war because so many of the deadly weapons were retained in Germany for flak duties, and not deployed to the Russian or western fronts.

So, it's quite appropriate that the men (and women) of Bomber Command will finally be memorialized this Thursday.  Yet, even the dedication ceremony has attracted controversy.  After years of effort to raise the funds for the memorial, Bomber Command veterans, family members and other benefactors will be handed a $900,000 bill for staging the event.  The British MoD says it cannot support charitable events, although the U.K. Daily Mail found more than two dozen donations in recent years.  With the ministry refusing to pony up, trustees of the Bomber Command association--many of them World War II veterans--are on the hook for seating and security at the event.

To paraphrase Churchill, never before have so many (heroes) been treated so shabbily by so many.  And did we mention that the BBC's coverage of Thursday's dedication has been relegated to a low-rated news channel?     .

Not a lot about the X-37B makes much sense. It has a miniscule payload capability, uses a launch vehicle (Atlas V 501) that has 70% more lift capacity to LEO than the X-37 requires and is optimized (single engine Centaur) for geosynchronous orbit launches. Add to that, the NY Times reported that shortly after the first X-37 launch a Harvard astronomer spotted the upper stage being sent into “an unknown orbit around the sun.”

“Jonathan McDowell, a Harvard astronomer who tracks rocket launchings and space activity, said the secrecy surrounding the X-37B even extended to the whereabouts of the rocket’s upper stage, which was sent into an unknown orbit around the sun. In one of his regular Internet postings, he said that appeared to be the first time the United States had put a space vehicle into a solar orbit that is ‘officially secret.’”
http://www.nytimes.com/2010/05/23/science/space/23secret.html?pagewanted=1&_r=1&sq=x37&st=cse&scp=1

My guess is the X-37B is being used as a deception to mask a second payload carried into a higher orbit, most likely geosynchronous.

After his announcement of the commencement of area bombing of German cities Sir Arthur Harris quoted the Book of Hosea in the Hebrew Bible: "They that sow the wind, reap the whirlwind". Let all those who doubt the morality of the Allied bombing of German and Japanese cities during WW II evaluate the meaning of this Biblical quote. I hope this "reap the whirlwind" quote is on the Bomber Command Memorial in London but I am positive polical correctness would never allow it. God Bless all those RAF pilots and crews of many nationalities who died over Europe during WW II.

Since the veterans themselves are on the hook for seating and security at the dedication, unlike less controversial "Mickey Mouse" dedications, I wonder if enough money could put the "reap the whirlwind" quote on the monument?

I'm not sure this is an example of latter-day revisionism. The British did not honor Harris. That was not accidental.

Perhaps the British were being disingenuous or even hypocritical, but they did not want Harris' actions, no matter how important, to define their war.

"reap the whirlwind"
NOT APPROPRIATE.
Innocents coerced into killing innocents.

Sorry, Clothcap. As I use to say when I lived in Germany and the tour guides would point out bombed-out building and blame the Amis --"You should have thought of that."

I read that not thousands but one million 88 mm guns were transferred to the air defense of the Reich.

That's a lot of manufacturing capability and manpower diverted from the front line.

I read that not thousands but one million 88 mm guns were transferred to the air defense of the Reich.

That's a lot of manufacturing capability and manpower diverted from the front line.