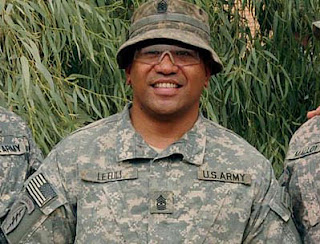 Former Command Sergeant Major John Letuli of the North Carolina National Guard has been demoted to Master Sergeant (E-8) after it was discovered that he was wearing decorations, devices and tabs he never earned. Still unanswered: why his Guard superiors tolerated the obvious fraud for so long (Military.com photo).
By the time a man reaches the rank of Command Sergeant Major, he ought to know better: wearing unauthorized decorations and devices on your uniform is a serious offense, punishable under the UCMJ.
Apparently CSM John Letuli never learned that lesson. He's currently in the process of retiring from the North Carolina National Guard at the rank of Master Sergeant (E-8) after losing a stripe for falsely claiming that he had earned such devices and decorations including HALO wings, the Purple Heart, and the special forces tab. In reality, Letuli was not authorized to wear any of those devices or medals.
More from Military.com:

Officials would not offer details on the actions of former Command Sgt. Maj. John Letuli, but a retired Green Beret who had been pressuring for the investigation since September 2009 said he is outraged that the Guard and the Army appear to be letting Letuli retire with just "a slap on the wrist."

Retired Master Sgt. Jeffrey "JD" Hinton said he has written Sen. John McCain, R-Ariz., the top Republican on the Senate Armed Services Committee, hoping for a congressional inquiry into how the Army and North Carolina Guard handled their investigation of Letuli, including why he is not being more seriously disciplined.

The investigation was launched after Hinton published photos of Letuli on his website, Professsionalsoldiers.com. In one photo, Letuli is wearing a Special Forces patch and tab on his BDUs; in another, he is in Class As, wearing the Purple Heart and Soldier's Medal ribbons, and a Military Freefall Badge, or "HALO wings" -- none of which he earned.

Hinton said he's angry that Letuli appears to be retiring with full benefits, with only the loss of one stripe as punishment. "He needs to be court-martialed and thrown out," Hinton said. "How does an E-8 or E-9 get away with this, with only a slap on the wrist? I don't get it."

Quite frankly, we don't get it either. But sadly, we've chronicled quite a few examples of senior personnel (both officer and enlisted) getting by with misconduct that would end the career of a mere mortal. We're also reminded that the national guard (in some states) tends to be clubby, run by the good-old-boys (and girls) network. In other words, Letuli had sponsors and patrons who helped him reach the rank of CSM--the same people who ignored those unauthorized badges, medals and tabs that appeared on his BDUs and service dress uniforms. And true to form, those same folks are now trying to ease Letuli out the door and avoid jeopardizing their own careers.

We spend a little time in the Tarheel State each month. Sadly, North Carolina has not been a model of good government in recent years. Former Democratic Governor Mike Easley recently pleaded guilty to felony charges for accepting gifts and other benefits from political allies. Through a plea deal, he won't spend any time in jail, but he has the dubious distinction of being a convicted felon--and an embarrassment to his state. Ethics questions are still swirling around his successor, fellow Democrat Beverly Perdue.

Obviously, it's a long jump from the governor's mansion to a national guard regiment. But the scandals involving Easley and Letuli are endemic of a wider problem in North Carolina. If you're willing to tolerate a governor who breaks the law, it's no surprise the state guard is populated with senior officers and NCOs who look the other way when one of their own commits his own little fraud. And when his misdeeds are exposed, the same individuals circle the wagons send Letuli out the gate with just a slap on the wrist.

In a just world, both Mike Easley and John Letuli would be cell mates at Leavenworth, or some other federal pen. Instead, they're slouching off into the sunset, reputations destroyed, but pensions and benefits intact.

ADDENDUM: In view of recent court decisions, we wonder if Letuli will try to have his rank restored. Over the past six months, federal judges in Colorado and California have ruled that individuals have the right to lie about their military service. Does that same right extend to members of the military? In light of those rulings, you could make the case that regulations limiting the wearing of medals, decorations and devices by military personnel are a violation of free speech. So what if I never earned the Air Force Cross...I always wanted one, and according to the federal bench, I have the right to make that claim. By that standard, Letuli wasn't committing fraud, he was simply exercising his right to free speech.

Posted by George Smiley at 7:43 PM

You give up a chunk of protection under the 1st Admendment when you join the military (hence agreeing to fall under UCMJ (and in the NG instance the states version of UCMJ)).

in the vanguard said...

It's quite understandable he did this. His ommander in chief does a whole lot worse and gets away with it.