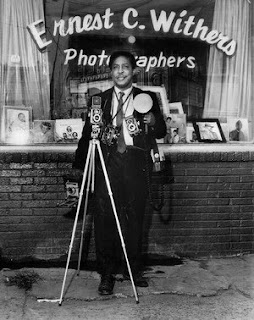 Ernest Withers in front of his Memphis studio. The late civil rights photographer has been recently revealed as a secret FBI informant who reported on the figures he covered (Ernest C. Withers trust via the Commercial Appeal).

He was one of the best-known photographers of the civil rights era. His camera recorded iconic images, ranging from the identification of Emmett Till's killers in a Mississippi courtroom, to Martin Luther King's March on Washington in 1963, and even a meeting of his grief-stricken aides, just hours after Dr. King was assassinated in Memphis.
Ernest Withers was often called the original "civil rights photographer." He was seemingly everywhere and he seemed to capture everything that appeared before his lens. As an African-American photographer, Mr. Withers had access that white journalists could only dream of. Withers was a member of the inner circle, a man who enjoyed near-total access to the highest levels of leadership in the civil rights movement.
But Mr. Withers, who passed away in 2005, led a double life. As reporter Marc Perrusquia of the Memphis Commercial Appeal has discovered, Ernest Withers was also a secret FBI informant, a man who provided reams of material on civil rights leaders and their activities. For example, it was Withers who shadowed King on the day before his death in Memphis, giving agents extensive details on a meeting with suspected radicals.
And it was Withers who offered information on a number of ordinary Memphians who had only a limited involvement with the civil rights movement. When a car dealer offered jobs to local activists, the photographer informed federal agents. He also noted the feud between a local minister and the radio station that carried his program, and even reported a man who carried cigarettes to prisoners in the local jail. Information provided by Ernest Withers generated literally thousands of pages of FBI reports, most of them prepared by the Memphis field office.
In fairness, those "prisoners" and "activists" might be better described as radicals. Many were members of (or had ties to) an organization called the Invaders, a Memphis group patterned after the Black Panthers. Local leaders feared the Invaders and there were legitimate concerns about their tactics and intentions. Lily-white law enforcement agencies like the FBI had to rely on black informants to gather information about radical groups.
Still, patriotism was apparently not Withers' motive for working with the FBI. While his exact reason for becoming an informant is not disclosed, documents obtained by the Commercial Appeal suggest the photographer was on the FBI payroll, closely supervised and controlled by his agency handlers. During Congressional testimony in the late 1970s, a Memphis-based agent reported that one of the FBI's "best" racial informants received $200 a month for his reporting. The source was never named in the hearing, but the agent said his informant tracked King during the days before his death--the very task assigned to Ernest Withers. If Withers sold out, the reasons were probably financial.
In return, the bureau worked tirelessly to keep Winters' activities a secret. To this day, the bureau refuses to acknowledge the Memphis photographer was an informant. The FBI will not release his informant's file--or even acknowledge such records exist.
In response to multiple FOIA requests, the agency finally turned over 360 pages of records relating to a public corruption scandal involving Withers, who worked as a Tennessee Alcoholic Beverages Commission (ABC) agent in the 1970s. Many of those files were carefully redacted, blotting out the numbers of paid informants and other sensitive information. However, one of the informant numbers was not blacked out; that number (which appeared in other FBI documents) has been traced to Ernest Withers.
The Commercial Appeal's report is prompting revisions in the photographer's image and legacy. Memphis Congressman Steve Cohen has proposed federal funding for a museum to showcase Withers's images. But revelations about his FBI work have prompted demands that the museum project be put on hold. Others--including Withers son and daughter--expressed shock about his undercover activities. Apparently, no one in the civil rights movement (or Memphis's African-American community) were aware of the photographer's informant career until Mr. Perrusquia began digging.
But some who knew Withers during the 1960s have been quick to forgive. Former Atlanta Mayor Andrew Young, one of Martin Luther King's key lieutenants, told the paper the civil rights movement was "transparent," and "had nothing to hide." Then he added: "I don't think Dr. King would have minded him making a little money on the side." Others have suggested that Withers was somehow "entrapped" into becoming an informant.
However, the records uncovered by the Commercial Appeal suggest otherwise. Mr. Withers appears to have been a willing participant, providing information on the same civil rights figures he constantly photographed, apparently in exchange for payment.
Which raises another question--one which will go unanswered. How did Ernest Withers actually view the men who appeared through the lens of his camera. Many consider them heroes. But Ernest Withers either found them dangerous--or more likely--a means to supplement his income, by reporting on their activities to the FBI.
Posted by Unknown at 4:13 PM