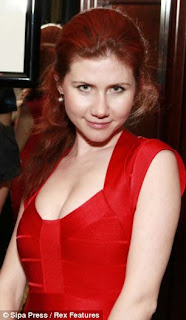 Home to Moscow: less than two weeks after being arrested, Russian operative Anna Chapman has been deported, following one of the most hastily-arranged "spy swaps" in history (AP photo).

Barely a week ago, Anna Chapman and those other, deep cover Russian operatives were facing long stints in a U.S. jail, after the FBI rolled up their spy ring.

Now, they're heading back to the Motherland, as Washington and Moscow conduct a hastily-arranged "spy swap," the largest since the Cold War.

The exchange began this afternoon with Ms. Chapman, the red-haired "femme fatale" of the group (and nine other defendants) entering guilty pleas in a Manhattan federal court. They were quickly sentenced to time served, and ordered deported by Judge Kimba Wood (remember her?) During the sentencing, Judge Wood announced that Russia would release four people to the United States--individuals imprisoned for spying for the west. From the AP account of today's proceedings:

The defendants each announced their pleas to conspiracy to act as an unregistered agent of a foreign country. Some spoke with heavy Russian accents, sometimes in broken English, despite having spent years living in the U.S. posing as American and Canadian citizens.

An 11th defendant was a fugitive after he fled authorities in Cyprus following his release on bail.

The defendants provided almost no information about what kind of spying they actually did for Russia. Asked to describe their crimes, each acknowledged having worked for Russia secretly, sometimes under an assumed identity, without registering as a foreign agent.

Defendant Anna Chapman mentioned she had communicated with a Russian official via a wireless signal, sent from her laptop. Asked by the judge whether she realized at the time that her actions were criminal, she said, "Yes I did, your honor."

Among those expected to be released by Moscow is Igor Sutyagin, a former arms control expert who was serving a 14-year sentence for spying for the U.S. A journalist in Vienna reportedly saw Sutyagin getting off a plane from Russia this afternoon; however, his release was not immediately confirmed.

In many respects, the spy swap was stunning. Such exchanges occurred periodically during the Cold War, but the sudden deal for Chapman (and her fellow operatives) caught some observers off-guard. After all, the "suburban" espionage ring was widely viewed as costly and ineffective.

Most of the Russian agents had been living in the United States for a decade--or longer--but there was no evidence they had acquired or passed on secret information. None of the defendants were accused of espionage; all pleaded guilty today to charges of failing to register as a foreign agent. In the spy game, that's the equivalent of a speeding ticket.

So, why was Moscow so anxious to secure the release of Ms. Chapman and the others? Predictably, the gang at AP says Russia doesn't want the spy case to upset "improving" relations with Washington. With an arms limitation treaty and other important business pending, Russian leaders don't want the distraction of a espionage scandal, and give Congress a reason to reject important agreements.

Still, that explanation only goes so far. Both sides have endured far worse spy episodes, and under more difficult circumstances (the 1960 U-2 incident comes to mind). Yet, even in that case, there was no sudden rush to make a deal. Francis Gary Powers, the U-2 pilot, endured a Moscow show trial and months of KGB interrogation before he was finally freed. Other operatives have languished in prison for years prior to release.

Which brings us back to our original question: what made Anna Chapman so valuable that Russian leaders secured her release in near-record time? For starters, consider the fact that the operatives were living her openly, with the rights accorded to legal immigrants. We'll assume that all of them "lawyered up" immediately after arrest, which means they were not subjected to extensive interrogations by the FBI, at least not without their attorneys present (emphasis ours).

Despite years of bureau surveillance, the SVR (Russia's successor to the KGB) believes that Chapman and her associates still have information that's worth protecting. Better to arrange a quick deal and not leave them hanging in the U.S. Justice system, where the threat of a lengthy sentence (or a plea deal) could convince them to talk. At this point, it's not clear what information the Russians are trying to protect, but for a spy ring that was supposedly incompetent--at best--Moscow pulled out all the stops in bringing them home.

As for the United States, our agreement to the quick exchange is also a bit puzzling. Some have suggested that we wanted Mr. Sutyagin released, given the harsh treatment he has undoubtedly received in Russian prisons. But if that was the case, why didn't we roll up the spy ring months or even years ago? Sutyagin was convicted in 2004, and has spent most of the past six years in a facility above the Arctic Circle. By comparison, Anna Chapman's digs in federal lock-up were positively luxurious.

Here's a more likely scenario for our support of the spy swap. Chapman and her fellow operatives were instructed to penetrate policy-making circles, making contact with members of our elite. To date, there has been no comprehensive list of who they associated with, beyond a few vague descriptions in court filings. Is there something embarrassing in Chapman's list of American contacts, names that might be revealed over the course of a lengthy trial?
Or, as one reader has suggested, did she launder large sums of SVR money through her real estate ventures, a technique that might create some uncomfortable moments for U.S. banks, real estate firms and individual investors that did business with Chapman. With the spy exchange, we may never know the answer to these questions, unless Ms. Chapman returns to her "capitalist" cover and writes a book.

One thing is certain: when the U.S. and Russia agree to a major spy exchange in a matter of days, it's clear that both sides have something to protect. Maybe Anna Chapman and her associates weren't such failures after all.
***
ADDENDUM: The rapid exchange may also be rooted in "tradecraft" issues, particularly on the Russian side. From what we've been told, FBI counter-intelligence officials had been monitoring the Chapman ring for years, finally arresting the operatives after one of their comrades fled the country. That disclosure set off alarm bells at the SVR, which (like any spy agency) doesn't like having its deep-cover operatives identified and monitored continuously. Getting Chapman--and her fellow spies--back to Moscow will allow controllers to thoroughly debrief the operation and try to figure out what went wrong. Likewise, the FBI wasn't anxious to disclose how it discovered the Chapman ring so quickly--and how years of effective surveillance went undetected by the SVR.

In a recent article for The Weekly Standard, intelligence historians Harvey Klehr and John Earl Haynes list the most common techniques for discovering spies, including signals intelligence and "turning" disaffected Russian intelligence operatives. While those are genuine possibilities, the authors also raise the "nightmare" scenario for Russian intelligence: there may be a high-level mole in Moscow Center, someone with detailed knowledge of deep cover operations who has been in place for years, and is likely, still on the job.
It's also worth noting that one of the western spies freed by Russia was instrumental in identifying American turncoats like Robert Hanssen and Rick Ames. When he was arrested, there was genuine concern about the loss of a "crown jewel" source, and its potential impact on our intelligence operations. But if our hunch is correct, it looks like the CIA found an excellent replacement.
As the hub-bub over the spy swap begins to fade, you can rest assured that SVR staffers are working around the clock, trying to figure out if they've been penetrated, what that person has access to, and how much of that information has been passed to western intelligence.

And how's your week been going, Mr. Putin?
Posted by Unknown at 5:49 PM

Sutgayin was also arrested and detained five years prior to his trial (1999)... So he's been interned for over a decade at this point.

My guess is that Lovely Anna was laundering VSR money through the real estate business and possibly the Russians did not want that compromised.

The DoJ probably did not have a really strong case so the DA had no reason to fight this.

It is quite conceivable she could embarrass politicians, but if that were the case, why not have her killed and make it look like a robbery or such? However, absent of any real information, the simplest exclamation is usually correct.

No mystery - it's Perestroika, the Obama version.

Yes. Just like what Colonel Chaiko said in the 1985 movie White Knights. "Something for nothing"

This whole escapade makes no sense. With the exception of the “money man” Christopher Metzos who escaped, none represented a threat. It would have been far better to keep the remaining 10 under observation. So the question is, why did the FBI roll the operation up at this time?

We tend to think operations like this are well thought out and run according to plan. But it is more likely this was an enormous screw up between the FBI and the White House. First, no FBI director in his right mind would conduct such an operation without first notifying the White House. It just doesn’t happen. There was a sense of urgency however. Metzos was planning to leave the country and he was the one person who had some value. He knew the purpose of this group and he probably had contact or knowledge of other groups in the US.

My guess is the FBI’s request for action languished on somebody’s desk at the WH or even made it to the President’s reading folder without action. When it became apparent Metzos was actually leaving the country, likely there was a flurry of activity but with a decision that came too late capture him before he boarded his flight. The rest is history. At our request he was detained in Cyprus, granted bail and slipped away.

The whole spy swap charade appears to be an afterthought. None of the four swapees are US operatives. It’s just an after the fact cover to give some rationality to this.

The Whitehouse was going to disclose the long ongoing tracking of the soviet agents as a negotiating point. The FBI disclosed the investigation before the Administration did simply to steal the thunder.

In wartime, truth is so precious that she should always be attended by a bodyguard of lies.
Winston Churchill

“…one ranking Russian lawmaker (former KGB counterintelligence officer ) who is calling the event "fishy and sneaky."

AKA, does not pass the smell test.

Makes you wonder whether the SVR detected the FBI surveillance years earlier – as others have noted, the SVR evolved out of the KGB who had a reputation as the very best at counter-surveillance.

"Is there something embarrassing in Chapman's list of American contacts, names that might be revealed over the course of a lengthy trial?"

As I recall some of those arrested were in Boston. I did wonder if there was any connection to Kagan.

Then again, there was the Hispanic looking Russian who worked for the Hispanic newspaper - A connection to Sotomeyer?