The Fighter that Saved Britain 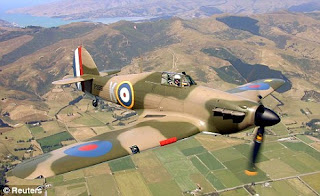 A restored Hawker Hurricane, the unsung hero of the Battle of Britain. While the "Hurry" shot down more German planes than the Spitfire, the latter aircraft received most of the credit for defeating the Luftwaffe in the pivotal 1940 air campaign (Reuters photo via the U.K. Daily Mail).

On this 70th anniversary of the Battle of Britain, there are the inevitable tributes to the men (and women) of the Royal Air Force, who prevented a German invasion in the late summer of 1940, and in the process, saved a nation and altered the course of World War II.
Today, Winston Churchill's immortal tribute to British fighter pilots who defeated the mighty Luftwaffe has become the battle's accepted synopsis ("never in the field of human conflict was so much owed by so many to so few"). The Prime Minister's stirring words conjure up images of undermanned RAF fighter squadrons, rising to meet vast formations of German fighters and bombers. Ironically, it the was Luftwaffe that was most affected by shortages of pilots and aircraft, while the British had far more success at replacing combat losses.
Another famous misconception about the Battle of Britain concerns the RAF's two primary fighters, the Hawker Hurricane and the Supermarine Spitfire. Eight decades later, the Spitfire is regarded as the most important fighter of the campaign, a superb aircraft that outclassed German ME-109s and 100s in the skies over Britain, and secured final victory for the RAF.
But that image is also an exaggeration, as the U.K. Daily Mail recently reminded us:
"...the summer of 1940 will always be associated with the Supermarine Spitfire, the single-engined RAF plane which became the most potent symbol of Britain's fight against German subjugation. The very name Spitfire is now synonymous with victory in the air.
But this is a travesty of what really happened in the crucial months of 1940.
For the RAF aircraft which actually won the Battle of Britain was an older, larger, slower but still deadly fighter, the Hawker Hurricane.
Without the Hurricane, the RAF would have probably lost the Battle of Britain, because there were simply not enough Spitfires emerging from the aircraft factories and into the squadrons. In the national struggle for survival, the Hurricane dominated the front line.
[snip]
On the eve of the Battle of Britain in early July 1940, Fighter Command's operational force throughout the United Kingdom was made up of 29 squadrons of Hurricanes and 19 of Spitfires, proportions that were to remain the same throughout the coming months.
The overall distribution between the two fighters was largely reflected in German losses. According to the Air Ministry's own figures, for every two Luftwaffe planes brought down by the Spitfires, three were shot down by Hurricanes.
Despite such statistics, the Hurricane's contributions are often viewed as secondary, through the prism of history. Popular accounts suggest Hurricane squadrons were dispatched to attack German bomber formations, while the more nimble Spitfire battled Luftwaffe fighters.
But that image is equally misleading; with Hurricane squadrons forming the backbone of Fighter Command in 1940, those units engaged the ME-109s more often than the less-numerous Spitfires. Yet, press accounts of the era--and British propaganda--almost always featured the "Spit." As author Leo McKinstry writes, footage of a German aircraft being shot down was used in a popular newsreel feature in 1940. The film was recorded by the gun camera of a Hurricane, which was responsible for the kill. On the newsreel, the narrator attributed it to a Spitfire; Hurricane pilots in the audience groaned.
With the passage of time, the "Hurry's" slight became even more pronounced. When the British MOD staged a Battle of Britain fly-by in 1945, there wasn't a single Hurricane in the formation. While pilots trumpeted its virtues, the Hurricane was largely forgotten by the public and air power historians.
Why did it happen? The Spitfire simply captured the public's imagination, like other legendary aircraft of the Second World War. Ask someone to name a fighter plane from that era, and they'll probably mention the Spitfire, the P-51, the ME-109 or a Japanese Zero. Never mind that other aircraft were equally capable--or more widely produced. Allied propaganda gladly fed romantic notions of the Spitfire, to help sustain public support for the war effort.

Mr. McKinstry's new book attempts to rectify oversight of the Hawker Hurricane, and it's long overdue. Unfortunately, most of "The Few" who flew Hurricanes into combat in the summer of 1940 have passed on. It's a fitting requiem for a great aircraft and the men of Fighter Command who helped turned the tide of the war eight decades ago.

Posted by George Smiley at 8:38 PM

You just got a lot of points with me! I saw the subject header in the feed on ThunderTales and I mumbled, "that's the Hurrie, but I bet this twit rambles on about the Spit!"

I should never have doubted you and I will never again!

One thing I remember regarding Japanese Imperial naval flyer's troop rotation during WWII is that they don't rotate their best pilot back home to train their own replacement, so by the end of the war, they're literally out of pilot with combat experience. I'm not sure if German or British military does the same kind of pilot rotation as we do.

If I recall correctly, the Hurricanes were sent against the bombers while the Spitfires were pitted against the fighter escorts that always accompanied the bombers. Without the Spits to keep the Bf-109s and FW-190s off the Hurricanes, things would have not turned out as they did.

The Spitfire was a prettier airplane.

Ditto for the bf-109 vs. the FW-190. The Messerschmidt just looked a lot meaner and more dangerous than the Focke-Wulf, even though the 190 was a much more effective fighter.

And the p51 Mustang? Ahhhh! Beauty and performance.

TOF--A popular myth, but not always true. If you look at the number of "Hurrys" available during the Battle of Britain (compared to the number of Spitfire squadrons), there's no way the Hurricanes could be related solely to bomber intercept. The Hurricanes routinely mixed it up with German fighters and more than held their own.

I highly recommend "Fly for Your Life" by Larry Forester about the exploits of Wing Commander Stanford Tuck and his exploits leading the Hurricanes in battle. It was a Bantam War Paperback - part of a series of books that retold much of WWII, as seen through the eyes of the men who fought it.

I'm glad to see the Hurri get its due.

Thinking about things from the other side of the Europond, and planes that don't get their due, I have always wondered if there was any reason other than the political influence of the Messerschmidt combine that the Germans stayed with producing as many Bf109s as they did for so long.

When the Fw-190 got its teething troubles worked out, it was an all-round better aircraft than the late mark Bf109(specially the G)Seems like they should have focused more on the 190.