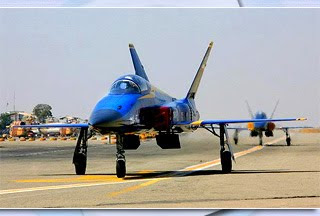 Anything but stealthy. Iran's says its "advanced" Saeqeh jet fighter is similar in performance to the U.S. F/A-18. But the aircraft is actually a re-engineered F-5, which Tehran bought from the United States in the 1970s. Iran's claims about the successful development of "stealth" aircraft and drones are equally dubious (Press TV photo).

When it comes to outrageous claims, it's hard to beat Iran's defense establishment.

Less than a year after announcing plans to manufacture "stealth" aircraft, Tehran claims to have successfully tested a radar-evading drone. From the propagandists at state-run Press TV:

"The drone, due to its physical attributes and the material used in its body, cannot be detected by any radar," Air Force Brigadier General Aziz Nasirzadeh, the force's coordination deputy, told reporters.

He said data from the test-flight had been favorable and the Air Force will move forward with its plans for the drone, called Sofreh Mahi, meaning Manta Ray in English, Fars News Agency reported.

To be fair, Press TV did identify the platform as a drone, not a manned aircraft. Iran has been producing various types of UAVs for more than a decade, and since drones have an inherent "degree" of stealth, the claim may have some minor basis in fact. However, other media outlets--including Reuters--claimed the flight was the test of a stealth jet, and even the Press TV account included an image of Iran's domestically "produced" Saeqeh fighter.

That particular aircraft offers an excellent example of the disconnet between Tehran's defense claims and reality. When it was introduced, the Saeqeh (which takes its name from the Farsi word for "Thunderbolt") was described as similar in capabilities and performance to the U.S.-built F/A-18 Hornet.

In reality, the Iranian jet is nothing more than a rebuilt F-5 Freedom fighter, which the Shah's regimen bought from the United States more than 40 years ago. The Saeqeh has twin vertical stabilizers and slightly improved avionics; any other resemblance to the Hornet (or the advanced Super Hornet) exists only in the minds of Iran's Defense Ministry and their mouthpieces at Press TV.

Moreover, it would be virtually impossible for Iran to produce a true stealth fighter--or drone--only one year after announcing the launch of that program. Development of low-observable platforms generally takes a decade (or longer), and that's for companies like Lockheed or Northrop-Grumman, who already have extensive experience in stealth design and manufacturing.

And, the timelines are even longer for respected firms attempting to break into the stealth market. Russia's Sukhoi design bureau staged the first test flight of its PAK FA (Future Frontline Aircraft System) on 29 January of this year, capping 20 years of research and development. But commercial production of the jet is not expected to begin until later this decade and by some estimates, Russian squadrons won't receive their first aircraft until the year 2020, fifteen years after the first F-22s were delivered to the USAF, and almost a decade behind initial deliveries of the F-35 Joint Strike Fighter to the U.S. and various allied partners.

We should also mention that PAK FA's future depends largely on continued infusions of cash from India, which plans to purchase the stealth jet from Sukhoi. Should New Delhi choose another option (say, joining the JSF consortium), PAK FA would die a quick death.

Those are cold, cruel realities of stealth aircraft design and production. Against that backdrop, it's impossible that Iran has compressed the development and testing schedule into a single year, even for a low observable UAV. We supposed there are a few individuals in the Iranian regime (and the mainstream press) that believe these claims, but they won't do much to improve security, particularly if--or should we say "when"--the Israeli Air Force comes calling.
***
ADDENDUM: While it's easy to laugh at Iranian claims of developing "super weapons," other announcements from Tehran should be viewed with more concern. Case in point: Mahmoud Ahmadinejad's recent directive to Iran's nuclear energy organization, mandating that uranium stockpiles be enriched to 20% purity, versus the current 3.5%.
As former U.N. arms inspector David Albright told the U.K. Guardian, the new standard is an intermediate step towards reaching weapons-grade material, which requires 90% purity. According to Mr. Albright, it's technically easier to make the increase from 20 to 90%, than the jump from 3.5 to 20%. Once the intermediate level is reached, Albright estimates that Iran could enrich uranium at 90% within six months, using only a fraction of their available centrifuges.
Just one more reason that events in the Persian Gulf will reach a flash point. And very, very soon.
Posted by Unknown at 4:10 PM

Any thoughts on Iran's upcoming and "stunning blow to the West?" Refurbished, er.. New weapon system? Political or economic alliance with Venenzuela? Extension of national boundaries along the Strait of Hormuz?

Outrageous claims or living in denial that Iran is actually progressing despite Western efforts to isolate them?

And as far as the imaginary Iranian "nuclear threat", I say the same thing. "Oh Geez, Not that S*** Again (Western Scaremongering Edition)

Does your definition of "progress" include Photoshop?