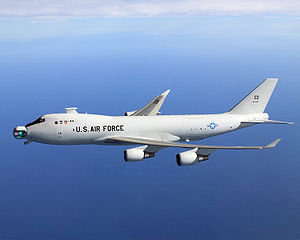 The Boeing YAL-1 in flight; the airborne laser has destroyed two missile targets during flight tests conducted this month. While the ABL platform shows enormous promise, it faces an uncertain future (USAF photo via Wikipedia).

It marked the first time that a directed energy weapon, fired from an airborne platform, has been used to destroy a missile in flight.

Mounted on a Boeing 747-400 airframe, the ABL launched from Edwards AFB, California late Thursday afternoon and flew to the Point Magu range, located off the coast of Ventura County. The profile was similar to a test last August when the ABL used its on-board sensors to locate (and track) a target missile launched from San Nicolas Island, California.

But this time, the aircraft and its crew not only located the liquid-fueled missile, they destroyed it, using the megawatt-class, chemical oxygen iodine laser (COIL). As described in this Wikipedia article, the detection-to-intercept sequence is both automated and brief:

The ABL system uses infrared sensors for initial missile detection. After initial detection, three low power tracking lasers calculate missile course, speed, aimpoint, and air turbulence. Air turbulence deflects and distorts the laser beam. The ABL adaptive optics use the turbulence measurement to compensate for atmospheric errors. The main laser, located in a turret on the aircraft nose, is fired for 3 to 5 seconds, causing the missile to break up in flight near the launch area. The ABL is not designed to intercept TBMs in the terminal, or descending, flight phase. Thus, the ABL must be within a few hundred kilometers of the missile launch point. All of this occurs in approximately 8 to 12 seconds.

However, the test didn't end there. The initial Reuters report failed to mention that the aircraft engaged a second, solid-fuel missile about an hour later. The liquid-fueled rocket (designed to simulate older, SCUD-type missiles) was launched from a sea-based platform; the second missile was fired from a launch site on San Nicolas Island.

According to the Pentagon's Missile Defense Agency, which is overseeing ABL development, the system met all test criteria during the second engagement, and switched off the laser before the missile was destroyed. That suggests the shut down was deliberate, probably aimed at preserving the target missile, conserving the laser's fuel supply, or both. In its operational configuration, the ABL will carry enough fuel for only 20-40 laser "shots," each lasting just 3-5 seconds.

It should be noted that last night wasn't the first time the ABL intercepted a solid-fuel missile. The MDA reports the platform destroyed a similar target on 3 February. By our count, that makes the platform three-for-three in aerial, operational testing, confirming ABL's enormous potential to intercept missiles in their boost phase, when they are the most vulnerable.

But getting the aircraft into position may be easier said than done. While the ABL is (reportedly) capable of engaging liquid-fueled targets up to 600 km away (and solid-fueled missiles at a range of 300 km), reaching that engagement point will require aerial escort by friendly fighters, electronic warfare support, dedicated tanker orbits and--in some scenarios--flights over hostile territory.

Even a countries with modest air defense capabilities (like Iran) would make a concerted effort to deny orbit areas to the ABL. And at some point, the presence of enemy fighters (or advanced SAMs like the Russian-made SA-20) become too dense for the ABL. Countries like China or Russia could simply conduct missile launches from deep inside their territory, behind layers of air defenses that couldn't be penetrated by the ABL and its support package.

But of course, ABL was never designed to be the limit of our missile defenses. Using the aircraft to knock down TBMs in the boost phase enhances the effectiveness of our overall plan, leaving fewer targets for sea and land-based interceptors to deal with. Fewer targets means a lower probability that "leakers" will penetrate the various layers of our defensive shield, and strike key military targets or civilian population centers.

That's why the multi-layered approach makes so much sense. But President Obama and Defense Secretary Robert Gates have been whittling away at missile defense, cancelling the scheduled deployed of a land-based radar and interceptor missiles in eastern Europe. They've also scaled back plans to add more ground-based interceptors in Alaska and California, opting (instead) for defenses built around the Aegis/SM-3 system, mounted on U.S. naval vessels and those of key allied nations.

While the SM-3 is very capable, the Obama plan has raised concerns about its impact on naval operations and fleet readiness. The Navy is well below the required number of ballistic missile defense ships, and there are questions about the service's ability to reach mandated levels--even if all Arleigh Burke class destroyers are upgraded to the SM-3 standard. Naval leaders are also worried about that the focus on BMD will limit the vessel's employment for other, equally-critical maritime missions.

That's one reason that a fully-funded ABL program would be a useful adjunct, particularly in regional missile defense missions. But it appears that ABL will never be fully funded or operationally deployed. Last year, the Obama Administration re-designated the program as a research project, scrapping plans to eventually build six more ABLs and employ them operationally.

As a result, those recent, successful intercepts lose some of their luster. As far as Mr. Obama and Mr. Gates are concerned, ABL is little more than an expensive science project. The aerial intercept (and destruction) of a ballistic missile--by an aircraft-mounted, high-power laser--is an astounding technological feat. But unless we're willing to translate that R&D achievement into an operational capability, last night's milestone may prove meaningless.
Posted by George Smiley at 6:30 PM