The View From Above 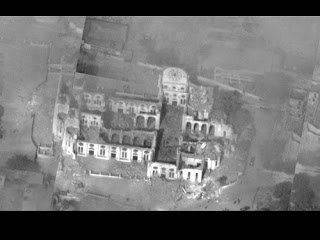 The ruins of Haiti's National Cathedral, captured by a US Air Force Global Hawk flying over the island (USAF photo)

It's one of the enduring lessons from Hurricane Katrina: intelligence, surveillance and reconnaissance assets--normally used to keep tabs on our adversaires--are equally valuable in determining the extent of damage during national disasters. That information, in turn, allows military teams and other relief workers to prioritize their efforts, getting aid to the hardest-hit areas first.

In the aftermath of the Haiti earthquake, much of that information has been collected by RQ-4 Global Hawk, the Air Force's long-endurance, high-altitude UAV. Over the past two days, the UAV (which can remain on station for more than 24 hours) has collected almost 2,000 images of the earthquake destruction. A few the images have been posted on the Air Force Flickr page.

Still, the images are of little value unless they reach the right people on the ground, in a timely manner. According to the Air Force, initial exploitation of the images is being handled by intelligence units at Langley AFB, Virginia; Beale AFB, California, and Hurlburt Field, Florida. They receive the information via a satellite downline from the Global Hawk, provide a preliminary assessment of the imagery, then pass their assessments to military personnel in Haiti; leaders at U.S. Southern Command, and senior government officials in Washington.

As we mentioned in a previous post, Global Hawk is the ideal platform for this type of mission. With its extended on-station time, the RQ-4 can capture images that can spot trends, such as the movement of survivors, and damaged areas that were previously undetected. That, in turn, allows military commanders (and NGO officials) in Haiti to deploy their resources more efficiently. And with an orbit altitude well above 50,000 feet, the Global Hawk doesn't create added congestion in the skies above Port-au-Prince.

For the Haiti mission, the RQ-4 is operating from the Naval Air Station at Patuxent River, Maryland. That choice was based on more than Pax River's (relative) proximity to the Carribean. The Navy is in the process of acquiring its own Global Hawks, and they've been operating demonstration aircraft from the base since 2006. With a stockpile of RQ-4 parts and other components already on hand, Pax River was the ideal staging base for surveillance flights over Haiti.
Posted by Unknown at 5:55 PM

Resupply for the entire population of Haiti is an immense undertaking. There's about 10 million people in the country. Even if not all of them are distressed, you'd need to bring in millions of MREs every day to provide food alone. Each MRE weighs over a pound. A C-17 can carry 170,000 lbs of cargo or so. Even assuming that the only lim fac on bringing in MREs is weight and not bulk, it'd take over 60 C-17 sorties every day to bring in 10 million MREs.

That's before you consider water, medical supplies, personnel, electricity, fuel, etc, all of which are urgently needed and of substantial bulk. Another complication is the lack of civil authority in Haiti.

The Berlin Airlift was a triumph of strategic air mobility, and everyone thinks that sets the standard for supplying large cities solely by air. But, its important to remember that it took some time to get everything set up and running smoothly, and that Berlin had far superior infrastructure. Haiti has one operational runway!

While airpower can ease the immediate pain, sealift will likely be the long term answer to deliver goods in bulk. And it looks like it will take some time to clear the port for operations.

That Guy From That Band said...

The biggest obstacle to using unmanned ISR assets for disaster relief has been FAA / domestic airspace. Pax River owns restricted areas and corridors that allow them to climb Global Hawk to >60K feet and keep it outside domestic airspace -- doing this from most airfields would be a huge logistics hurdle.