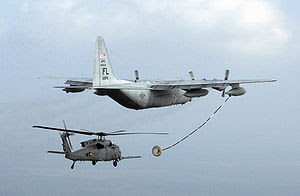 An Air Force HC-130P refuels an HH-60 Pave Hawk in flight. The USAF is now locked in a battle with a senior Pentagon official over a potential replacement for the tankers, which are among the oldest C-130 airframes in the service (Wikipedia photo).

As we noted last month, Pentagon acquisition chief John Young has serious doubts about the Air Force's Combat Search-and-Rescue (CSAR) mission. Late last year, he bluntly asked the service why it needs a dedicated force for those missions.
Since Vietnam, Mr. Young noted, the USAF has conducted relatively few aircrew rescues--the core mission for CSAR forces. Today's rescue units are more likely to be tasked for humanitarian missions; the infiltration or extraction of special forces personnel, or the pick-up of other ground elements. When Air Force choppers perform those tasks, there are inevitable cries of mission "poaching" by the other services, most notably the U.S. Army.
In response, USAF leaders offered the following points: (1) The service's rescue units represent the only dedicated CSAR force within DoD; (2) Air Force rescue squadrons have saved over 2,800 personnel in Afghanistan and Iraq, flying missions "in high risk areas that the other services cannot support," and (3) USAF rescue crews can deploy more quickly for humanitarian missions overseas, as they did during the 2006 tsunami relief operation in Indonesia.
Unfortunately, the importance of Air Force CSAR capabilities is apparently lost on Mr. Young and some members of Congress. After Young's initial inquiry, the House Armed Services Committee also questioned the need for standing rescue forces, and plans to spend $15 billion on the next-generation CSAR helicopter.
And if that weren't enough, the Pentagon acquisition czar has added a new element to the debate. As Aviation Week's Michael Fabey reports, Mr. Young has decided to eliminate the HC-130Js that had been programmed for rescue squadrons, shifting those airframes to MC-130 Combat Talon units assigned to Air Force Special Operations Command (AFSOC).
While the CSAR mission conjures up images of sophisticated helicopters and daring rescues, the HC-130 is an equally important member of the team. Nicknamed "Combat Shadow," the HC-130's primary role is the in-flight refueling of rescue helicopters. The aircraft can also provide communications relay for CSAR forces or limited tactical delivery mission, dropping pararescue specialists or equipment needed by special forces teams.
By comparison, the MC-130 is a dedicated SOF platform, specializing in the infiltration, exfiltration and resupply of those units. Its secondary missions are psychological operations and the in-flight refueling of special ops helicopters. Mr. Young believes the tanker mission can be consolidated in the MC-130 community, prompting him to shift those new, J-model airframes to AFSOC.
But there are a few problems with that scenario. First, the newest MC-130 variant (the "H" model) carries a price tag of $155 million, making it far more expensive than the HC-130J. By most estimates, the dedicated tanker version is less than half the cost of an MC-130; the Air Force could get more bang for its refueling buck by purchasing the HC-130J.
Additionally, there's the problem of "freeing up" MC-130s for the tanker mission. As with other SOF assets, MC-130 aircraft and crews are heavily tasked. Shifting J-model airframes to AFSOC will create some flexibility, but rescue helicopter crews are rightly concerned that tankers assigned to other squadrons--in another command--may not always be available.
Under the Air Force's current operational structure, the helicopters and HC-130s are assigned to the same squadrons and train together on a daily basis. Continuing that arrangement, as part of a dedicated CSAR force, makes eminent sense. The USAF should continue its fight to overturn Mr. Young's decision, and hope that he decides to return to the private sector--sooner, rather than later.
***
ADDENDUM: According to Aviation Week, at least two senior commanders have asked John Young to reconsider the shift of C-130Js to AFSOC. General William Ward, commander of the new Africa Command (AFRICOM) and General Gene Renuart, who leads U.S. Northern Command (NORTHCOM) have voiced strong support for the HC-130J. Excerpts from their e-mails to Young were published in the Aviation Week article:
In a Jan. 8 e-mail to Young, Gen. William Ward said, “I also would recommend against deferring HC-130Js from the program. The ranges and added performance features required for potential personnel recovery activities in Africa, as available in the HC-130J, are absolutely needed. Both aircraft will play an important role in AFRICOM.”
The same day, NORAD and Northern Command (NORTHCOM) chief Gen. Victor Renuart sent Young an e-mail saying, “I commanded the HC-130 units during my tenure as Wing Commander of the 347th Wing at Moody. Our current active duty HC-130 fleet is based on the oldest airframes in the inventory. The need to modernize these airframes is critical, both in terms of recapitalization and mission effectiveness.”
He continued, “The added performance of the ‘J’ models would have prevented a couple mishaps we had in the early days of combat rescues in Afghanistan and the much improved systems integration and cockpit design of the HC-130J will provide our CSAR crews the best chance for success in a very tough mission environment.”
Posted by Unknown at 4:44 PM

Maybe it is time for all the veterans organizations to protest the shortsightedness of this "Must have - even though he was a lobbyist" person.

Speaking of the large numbers of people employed by Obama after being granted waivers to the most simple of ethical standards, I am reminded of an old military saying - no-one is irreplacable.

I must have glossed over this he first time: