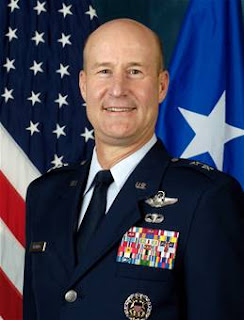 The first leader of Global Strike Command? Major General Douglas Raaberg has returned to a "placeholder" job at Langley AFB, Virginia. But his experience in bomber and nuclear operations makes him a strong contender for the Global Strike job. The new command is expected to become operational later this year and shift to a permanent home, possibly at Minot AFB, North Dakota (USAF photo).

The Air Force's Global Strike Command is still months away from becoming fully operational. For now, a provisional strike command is operating from temporary offices at Bolling AFB in Washington, D.C., while USAF leaders--and politicians--decide where the permanent headquarters will be located.
Six bases are under consideration for Strike Command headquarters, but sources tell In From the Cold that Minot AFB, North Dakota seems to be the clear favorite. Minot is the only base among the finalists that hosts both nuclear capable bombers and intercontinental ballistic missiles. Global Strike Command will consolidate the Air Force's strategic nuclear mission under a single organization.
Announcement of the organization's first commander is also a way's off, but like the basing option, a front-runner has emerged. In today's announcement of new assignments for five general officers, the Air Force announced that Major General Douglas Raaberg is returning to Langley AFB, Virginia, where he'll serve as a special assistant to the Commander of Air Combat Command (ACC).
For the past eight months, General Raaberg has served as Deputy Combined Air Force Component Commander for U.S. Central Command, the number two officer for all of our air assets in the Middle East. And by all accounts, he's done a fine job, so his return to Langley isn't a case of being put out to pasture for poor performance.
During his previous tour at the Virginia base, Raaberg served as Director of Operations for ACC, the Air Force's largest command. A career tanker and bomber pilot, General Raaberg was something of an anomaly in running ops for the command, which is dominated by fighter pilots.
But his expertise proved invaluable in the aftermath of the August 2007 nuclear incident at Minot, when six nuclear tipped cruise missiles were inadvertently shipped to Barksdale AFB, Louisiana on a B-52 bomber. General Raaberg headed the USAF's initial inquiry into the mishap, winning praise for his work. He briefed preliminary findings to Defense Secretary Robert Gates, who has set a high priority for fixing the Air Force nuclear enterprise.
And, the formation of Strike Command is a key part of his action plan. As the new organization moves toward operational status, Gates and the Air Force brass are looking for someone with the right background to get command up and running. With command experience in both the B-1 and B-2, Raaberg certainly fits the profile of a potential Strike Command leader.
So why the move to Langley? As we've noted in previous posts, "Special Assistant" positions are nothing but placeholders for senior officers on their way up--or out. There are no indications that Raaberg is planning to hang it up anytime soon, so the post at Langley will give him a desk until something else opens up--with Strike Command at the top of the list.
The thinking goes something like this: the new command will be led by a three-star, given its specialized focus and (relatively) limited resources. General Raaberg will nominated for his third star in the near future and head for Minot as a Lieutenant General select, then actually pin on his new rank in 2010.
A second possibility for Raaberg is command of 24th Air Force, the new cyber organization that will become part of Air Force Space Command. But General Raaberg's real expertise lies in bomber and nuclear operations, the qualities sought for the Strike Command leader.
As for organization's Vice-Commander, there are two possibilities. Brigadier General James Kowalski currently heads the provisional strike command, and is leading efforts to necessary to "stand up" the permanent organization. Kowalski is another veteran bomber pilot and his organizational knowledge would be invaluable in creating the permanent command.
But assigning General Kowalski to the #2 job would aggravate the missileer community, which represents the "other half" of Global Strike Command. While Kowalski is also certain to wind up as a part of the permanent command, the missileers will expect their own representation among the senior ranks, and someone with a "pocket rocket" will eventually wind up as the Vice Commander, or the CINC.
Of course, that assignment is still somewhere down the road. In the interim, there's the herculean challenge of transforming Strike Command into an operational organization, with a permanent home--and integrating various bomber and missile units that now fall under ACC and Air Force Space Command. But one thing seems certain; barring something unforeseen, General Raaberg will play a key role in the early, operational history of Global Strike Command.
Posted by George Smiley at 4:25 PM

MajGen Clary (former ACC/CV) has also returned from IRAQ to become a "Special Assistant" to COMACC. Might he also be involved?