About That "Air Refueling Equipment" 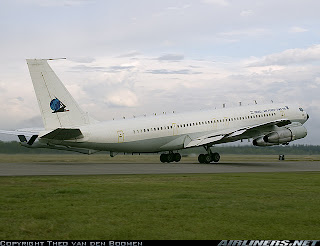 According to The New York Times, President Bush "deflected" an Israeli request for assistance in a proposed strike on Iran's nuclear facilities. The Times' David Sanger reports the White House rejected several requests for military hardware and airspace access, aimed at facilitating a potential raid on nuclear sites in Iran.

While sources interviewed by the Times didn't provide a precise timeline, the Israeli request for help came in early 2008, just months after the U.S. intelligence community released its controversial estimate on Iran's nuclear intentions. The report concluded that Tehran had temporarily suspended it weapons development program, although efforts to support that effort--including uranium enrichment and missile research--were continuing.

That assessment led Tel Aviv to conclude that the United States had rejected its own military option for dealing with Iran. Not surprisingly, the Israeli government began to signal its willingness to "go it alone", while pressing Washington for technical and operational assistance.

Administration sources say they're still not sure if the Israelis were on the verge of launching an airstrike, or merely trying to goad the U.S. into action. The Times' account suggests that U.S. never went beyond "routine contingency planning" during Mr. Bush's time in office. However, he did authorize expanded covert action against the Iranian nuclear program last year, hoping to delay or derail Tehran's effort through various clandestine efforts.

From our perspective, the Times story only offers a couple of new elements. First, there's the willingness of senior administration officials to discuss our discussions with the Israelis, and the decision-making that (ultimately) led to our rejection of their requests for assistance. But, with the Bush Administration in its final days, there is an understandable urge to clarify the record and even attempt a little legacy building. Apparently, a few folks at the White House and the Pentagon want the world to know that our policy toward Iran was actually a model of restraint.

The second element is hardly new, but it's the most intriguging, at least from our perspective. Well before the NYT article was published, various media outlets in Israel were reporting on the U.S. "rejection" of an Israeli request for additional aerial tankers. A Haaretz account from August of last year summarizes the "official" line very well.

But that version is something of a red herring. Truth is, an order for new tankers would have little impact on a near-term strike against Iran. Supposing that Mr. Bush had approved the request, the first KC-767 wouldn't be delivered to the Israeli Air Force for three to four years. By that time, Iran would already have a small arsenal of nuclear weapons, and key elements of the program would be more widely dispersed, largely mitigating the effects of a potential airstrike.

And, the Israelis don't need American assistance to field more tankers. The IAF's seven, existing KC-707s are converted airliners, modified by Israeli contractors, using their own equipment and designs. They could significanty increase their air refueling capability by simply "acquiring" older 767s that are being retired by the state-owned airline, El Al, or purchasing other airframes on the global market.

Still, the conversion process would be time-consuming; a recent addition of glass cockpits to the KC-707 fleet took two years. As with new tankers from the Boeing assembly line, the "converted" tankers would arrive too late for a preemptive strike on Iran.

So, what were the Israelis really asking for? Given the short-term requirement for increased tanking capacity, the IAF was, most likely, looking for a transfer of older USAF KC-135s, or in-flight refueling by U.S. aircraft during a raid on Iran.

The transfer option has been used before, most notably during the 1973 Yom Kippur War. Thirty brand-new F-4 Phantoms were stripped of their U.S. markings and flown directly to Israel, replacing IAF jets that had been shot down by Egyptian and Syrian surface-to-air missiles and AAA batteries. American C-5 and C-141 transports also flew 22,000 tons of supplies to Israel, part of Operation Nickel Grass. Their cargo included everything from M-60 tanks to Shrike anti-radiation missiles, needed to negate the threat posed by SA-6 mobile SAMs.

While the USAF still has hundreds of KC-135s in service, the most capable R and T variants are heavily engaged in support of global operations. The most likely candidates for transfer would be older "E" models, largely in service with Air National Guard and Air Force Reserve units.

However, mission capability rates have been dropping among those airframes. Some remain in service at the insistence of Congress (to prevent the loss of authorized maintenance billets), but some of these tankers are no longer airworthy. Restoring them to full operational service would take time--something the Israelis can hardly afford.

We should also note that the USAF's other tanker, the KC-10 Extender, is a less likely candidate for sale or transfer. Air Force KC-10s are also heavily tasked and besides, Israel has no existing maintenance or operations base for that aircraft. Creating one would be too costly and time-consuming.

Exact phrasing of the tanker request remains classified, but there are signs that Israel asked for direct assistance--the in-flight refueling of IAF jets by U.S. tankers, over Iraq, in support of a strike against Iran. Those aircraft would (presumably) come from the 380th Air Expeditionary Wing, based in the Persian Gulf region. Both KC-135s and KC-10s are routinely assigned to the 380th, along with battle managment and reconnaissance aircraft.

The availability of American tankers would greatly increase the size of a potential Israeli strike package. Analysts believe that the IAF's existing refueling fleet could only support a strike force of 20-25 aircraft, limiting the number of facilities that could be targeted. With U.S. support, the size of the strike package could grow by a factor of three or four. Israeli F-15s and F-16s use the same "flying boom" refueling system as USAF aircraft; Additionally, by tanking with American KC-135s and KC-10s, IAF fighters would (likely) use callsigns and IFF squawks associated with our fighters, adding a deception element to their plan.

But it's a request the White House could only refuse. Allowing Israeli jets to fly through Iraqi airspace would jeopardize relations with Baghdad, and the use of tanker jets based in other Gulf States would further complicate regional diplomacy. It's a risk Mr. Bush found unacceptable, opting for covert action and a continuation of existing diplomatic efforts.

Did he make the right decision? We'll know by 2010, and possibly, much sooner. The U.S. refusal does not eliminate the possibility of an Israeli attack against Iran. Israeli leaders still have the option of sending a strike package through Turkey, using commercial call signs and resolution cell formations to mask their intent. Ultimately, the decision on striking Iran will hinge on factors more important than tanker availability.
Posted by Unknown at 2:04 PM