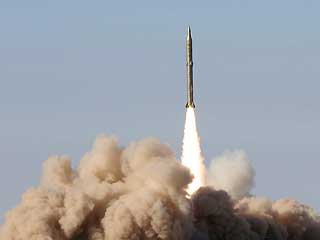 Barack Obama's first international "test" moved a bit closer to reality today, with Iran's test of a new, solid-fuel missile that can strike targets in Israel--and southeastern Europe--more accurately (and with less warning) than other missiles in Tehran's inventory.
Iranian Defense Minister Mostafa Mohammed Najjar identified the missile as the Sajjil, which was launched from a test complex western of Tehran. The two-stage system has a reported range of 1,200 miles, allowing it to reach targets as far away as Greece and Israel. Iranian officials claim that the Sajjil is Iran's first medium-range missile to use solid fuel technology, similar to that found in more advanced systems produced by Russia, China and the West.
While the test launch was a major step for Iran's missile program, it also represented another failure. U.S. defense officials report that th Sajjil suffered an engine failure in the early stages of its flight and traveled only 180 miles, less than 20% of its advertised range. Similar failures have also occurred in past launches of extended range versions of the Shahab-3, Tehran's first medium-range ballistic missile.
Unlike the Sajjil, the Shahab-3 uses liquid fuel to power its engines. While liquid-fuel engines represent proven technology, they also pose operational problems. The missile must be fueled before launch, raising the potential for accidents--or detection by intelligence, surveillance and reconnaissance (ISR) systems. It can take up to an hour to fuel an older Iranian SCUD or Shahab-3 and in some cases, the missile must be elevated to firing position before the propellant and oxidizer can be loaded.
By comparison, solid fuel is stable and can be stored in the missile for extended periods of time. That decreases the "signature" associated with operations--you don't need oxidizer and propellant trucks following your launcher vehicle around the countryside. With a smaller signature, it becomes more difficult to spot (and interdict) missile operations.
That problem is further compounded by the rapid response time of solid fuel missile systems. With liquid fuel missiles, there is often a lag between the receipt of launch orders and the actual event, increasing the vulnerability of the weapon--and its crew--to enemy interdiction efforts. The problem is particularly acute in Iran's ballistic missile force; many of its Shahab-3 launchers cannot raise a fully-fueled missile, meaning that the airframe must be elevated prior to fueling operations.
Those difficulties are largely eliminated by the use of solid-fuel missiles. With the propellant (and warhead) already on-board, a solid-fuel system can respond much more rapidly to operational tasking. Using standard "shoot-and-scoot" tactics, a Sajjil crew could fire their missile and move to an alternate site for re-loading and new tasking. That makes the job of "Scud hunting" (or, in this case, MRBM hunting) that much more difficult.
Additionally, Iran has taken steps to help conceal its missile and rocket forces, improving their prospects for survivability. In the spring of 2005, for example, western intelligence analysts were surprised to find pre-surveyed launch sites for SCUDs and battlefield rockets near the Persian Gulf coastline. The sites had been used in a late-winter exercise involving Iranian missile units, but the deployment locations weren't discovered until well after the training ended. That discovery underscores the difficulty associated with finding ballistic missiles and rockets in the field.
Tehran has also developed a concealed launch site which could support a surprise attack against Israel, U.S. targets in the Gulf region, or locations in southeastern Europe. When Iran's missile base at Bakhtaran was built several years ago, analysts noted a rather unusual feature in one of the underground bunkers. Iranian engineers left a rather wide opening in the top of the bunker, which was burrowed beneath a hill.
More detailed analysis revealed the opening was actually a launch shaft for Shahab-3 missiles, which are based at the facility. The underground cavern was large enough to allow a missile to be elevated to launch position and fired through the shaft. Using the subterranean complex, Iranian crews could prepare and fire the missile with little chance of detection. It was an ideal facility for staging a "bolt from the blue" strike against one of Iran's enemies.
Development of the Sajjil will make that scenario even more likely. A solid-fuel system is a much safer option for an underground launch, since the missile uses a more stable propellant. Couple that with improved reaction times, and you have an ideal weapon for the Bakhtaran complex. Clearly, Iran's new missile has significant technical hurdles to overcome, but those challenges are not insurmountable.
And, of course, Tehran is continuing its quest to develop a nuclear warhead, capable of delivery by medium and long-range missiles. That represents the ultimate weapon for for a first-strike system, like the one tested today in the Iranian desert.
***
ADDENDUM: So, how does the missile launch figure into the "challenge" for Mr. Obama? Consider this possibility: Iran would benefit from a crisis that sends oil prices spiraling. Tehran typically stages major military exercise in the late winter/early spring that includes ballistic missile units. The next Sajjil test could well occur during that time frame, part of an Iranian effort to provoke the U.S. and test the mettle of the new commander-in-chief. This won't be the last time that Mr. Obama (and his advisers) have to deal with Tehran's new missile.
Today's event also underscores the importance of the recent deployment of a U.S. X-band radar to Israel. Capable of detecting missile launches at long range, the radar will give Israeli officials an additional 60-70 seconds of warning time, critical in any "surprise attack" scenario.
Posted by Unknown at 4:39 PM

"And, of course, Tehran is continuing its quest to develop a nuclear warhead"

I quote "The next Sajjil test could well occur during that time frame, part of an Iranian effort to provoke the U.S." .

Although it is obvious Iran is provoking the US, it is least likely they want it to reach military conflict stage, as Iran would not stand a chance. They know it, but are obliged to show their 'might' to the Iranian people and neighbouring countries. Missile tests then, are an easy way of doing just that.

If they're just posturing, the Iranians should take a hint from their former neighbor, Saddam Hussein, who only pretended to have WMD so he'd look like a big swinging d*ck to his neighbors. See how he ended up.

Why would Obama bother confronting Iran at all?

All that would do is further upset a nation that hates us as it is.

Thank you so much for your insights. I Prayer that BO doesn't fail the test soon to come to him. I prayer that Isreal survives Bo term in office.
Mary in Kansas

I do not know why I was very like to play the EVE, so I need eve isk and the eve gold , do you know the eve online isk.