It's about time to close the books on the alleged "sex scandal" that reportedly involved General Michael Hayden, President Bush's nominee to lead the CIA. As we reported a couple of days ago, an organization called militarycorruption.com claimed that General Hayden "may" have had an affair with a married, female Air Force intelligence officer during a visit to Bosnia in 2001. At the time, General Hayden was director of the National Security Agency (NSA). The woman in question left active duty in 2004, and went to work as a civilian intelligence analyst. To date, we can find no information that can independently corroborate these allegations. Based on available evidence, it appears that General Hayden is an unwitting victim of a bitter divorce, and vengeful ex-husband--nothing more.

Unfortunately, these rumors have actually been making the rounds for a while. Left-wing muckraker Wayne Madsen mentioned them in a column about problems at NSA in April, 2005. But Mr. Madsen, who claims he was assigned to the NSA during his Navy career, has some obvious credibility problems. In the same article, he charges that the operational hub of NSA was evacuated on 9-11, to help cover-up the "shootdown" of United Flight 93 by military jets. Never mind that there isn't a single shred of credible evidence to support that allegation. And never mind that the reported evacuation was in response to an inbound, hi-jacked plane (the same Flight 93), which was apparently heading for Washington, D.C., on another suicide mission.
Militarycorruption.com has also been trafficking the Hayden story for more than a year, based largely on the claims of the woman's ex-husband (retired Air Force Major Kevin Furlong), who provided information on his ex-spouse. Furlong and his wife had recently divorced and it was, by all accounts, a very bitter and acrimonious break-up that produced (among other things) an e-mail threat against Major Furlong and his creation of a website featuring sexually explicit photographs of his former wife. A judge later ordered Furlong to remove that material from the internet.

In our own inquiry into the Hayden allegations, we've had the opportunity to examine more records relating to this case, including an Air Force IG investigation of the matter, conducted more than three years ago. The IG inquiry was based on a complaint from Major Furlong against his ex-wife. Readers will note that the IG found substantiation for only one charge, and she lated accepted non-judicial punishment (an Article 32) at Tyndall AFB, FL, on a single count of sodomy. The "evidence" was based on the videotape that her ex-husband provided. Interestingly, Furlong originally claimed that the man in the video was someone else, but the IG concluded that it was, in fact, Major Furlong. After receiving the Article 32, Mrs. Furlong (then a Captain) left the active ranks, and began a career as a civilian intel analyst, while retaining her officer's commission in the Air Force Reserve. She is currently works for a national-level agency in the Washington, D.C. area, and has refused comment on these matters.

Here is the IG report, in its entireity. It's rather lengthy, but (to date) remains the definitive document in this case. You can also review the document here, but be advised: the link is to a website that is openly hostile to the former Mrs. Furlong. We cannot independently verify any of these allegations, and until proven otherwise, the IG report remains the official record of the Air Force investigation. In reviewing the report, readers will note several instances where Major Furlong refuses to provide requested information, or comment on material he did supply to the IG, including a pornographic videotape. 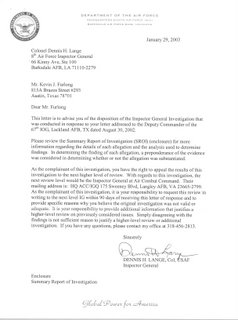 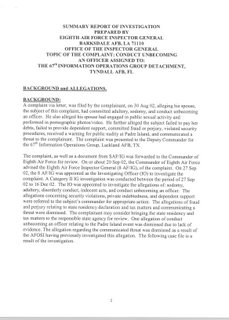 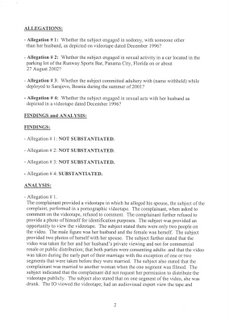 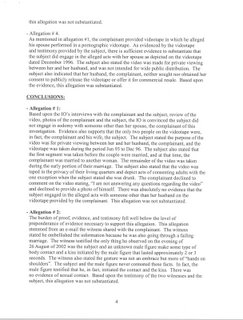 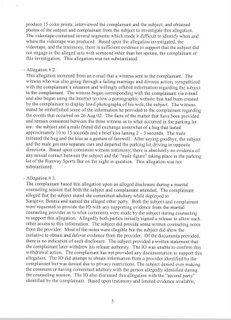 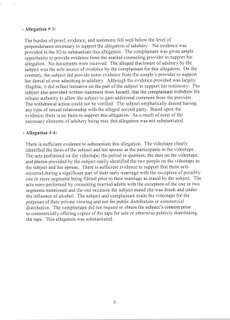 Not surprisingly, retired Major Furlong believes the IG inquiry was a whitewash. Such allegations are hardly new in military circles, but we can only judge by what the 8th Air Force IG found. However, it is clear that the IG process is not automatic topcover for flag officers. Over the past decade, several generals have been punished for misdeeds, including the former Judge Advocate General of the Air Force ( a two-star flag officer), who was demoted to Colonel after it was reveled that he had engaged in a string of extra-marital affairs.

Did the former Mrs. Furlong receive preferential treatment from the Air Force? That's the claim levied by her ex-husband and a group of Air Force NCOs who have reportedly sponsored various websites on her story. But so far, that claim cannot be confirmed, and (more importantly), the connections between this woman and General Hayden appear to be virtually non-existent. The 8AF/IG could find no substantiation for claims of an affair, even among the notes of a marriage counselor where (according to Mr. Furlong) his ex-wife admitted to the affair. The fact that the counselor released the notes is rather revealing, since such information is normally protected by confidentiality laws.

Our initial assessment of this one hasn't changed; it appears to be a bitter divorce that has wormed its way onto the internet and into fringe elements of the media, on the basis of an infidelity claim that cannot be independently verified. As it stands, we think that Major Furlong, Mr. Madsen and militarycorruption.com owe General Hayden an apology.

Additionally, it appears that Major Furlong may have his own bone to pick with the Air Force. According to information on the website, Furlong was disciplined for marrying his wife when she was a Second Lieutenant and he was a Major. I'm guessing that there may be more to the story than he's admitting. Furlong apparently met his future wife when he was an ROTC instructor at the University of Texas and she was a cadet; if their romantic involvement began during that period, then Furlong himself was guilty of an inappropriate relationship.

A tip of the hat to a couple of pros who aided in this inquiry. Bill (not his real name) is a former investigative reporter (and Pulitzer Prize nominee) who now works as a legal investigator, specializing in financial fraud and other white-collar crimes. Tom (also an alias) is a former military counter-intelligence officer with decades of investigative experience. Collectively, Bill and Tom did much of the legwork and helped us locate several key documents, including the IG report. A sincere thanks to Bill and Tom for their assistance. We owe you one.
Posted by Unknown at 11:17 AM

Wayne Madsen, FWIW, was one of the key players behind the fake TANG memos. He is a flake and conspiracy theorist of the first water.

What's your take on the NSA data mining business?

By the way, your links to the document don't work (except page 1). This document is on the captainamerika.net site.

I am Kevin Furlong, the former spouse of Captain amErika, Erika Proctor. I affirm that Erika Proctor stated to me in a marriage counseling session that she had an affair with Michael V. Hayden.

I provided at video tapes to Captain amErika's entire chain of command to prove she had committed sodomy. This was in response to her admission of adultery in the marriage counseling session and my own 'termination' from the Air Force under a cloud.

It is true the divorce was a mess. It is also true, Erika Proctor, while still married, was screwing a different NSA employee. It seems Hayden was just a 'one night stand' in Bosnia in 2001. Her boyfriend is an NSA analyst, Jack E. Griffith. She began fucking him in 2000 after she was reassigned from the SIGINT site at Bad Aibling Germany to NSA.

With this information, let's not stray from the central focus. Hayden had a 'one night stand' with Captain amErika she admitted to me. Her continued infidelity with another man just made matters worse.

Make up your own mind.

Should Hayden just get a pass on his infidelity?

Should Captain amErika get a pass from the Air Force Reserve for a violation of the UCMJ of "unlawful cohabitation" with Jack Griffith?

If she's got Hayden in her pocket it's a no-brainer.

If she's got Hayden in her pocket it's - any thing she wants. Who's gonna question the DCIA who has the complete support of the President?

Bravo Zulu to the guys who put this together.

Of course, the only real way of laying it to rest is investigators in the field reviewing the IG investigation, doing records checks and some Subject Interviews, under oath, followed by fluttering some people on the box.

Source FURLONG's specific allegation is unsubstantiated, second hand hearsay. And rises only to the level of an allegation unsupported at this time.

Great work. I'm Erika, the infamous, one and only. First and foremost, all the allegations are false. Okay, I admit to having sex with my then husband, Kevin Furlong; yep, guilty of getting drunk and having sex with my lawful partner--crazy. Regarding the allegation I admitted to having a relationship with Gen Hayden in couseling is also false. Mr Furlong and I agreed to the release of those records to the IG until Mr Furlong realized the records didn't support his allegations. And another thing, Mr Furlong did retire from the Air Force, but he was demoted to captain upon retirement.
--Erika

I'm not going to give my name, but I worked with you and Jack in 2000 after you got back from Bosnia (up on the 11th floor, remember? We were getting your equipment and your team set up to run the mission from there. Remember when your sister called the watch floor in a panic after she heard there was an attack in Sarajevo?) Anyway, I really enjoyed the videos of you and Kevin. One question - why didn't you trim the bush? Either way, I spilled a lot of DNA over those. If I had known back then that you took it in the ass so easily, I would have tried.