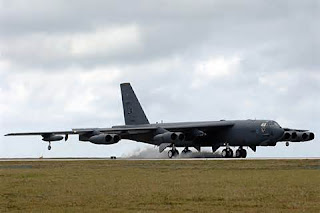 A B-52 lands on Andersen AB, Guam.  The Air Force is currently investigating a crew deployed to that base for flying within two miles of a Chinese artificial island in the South China Sea (Air-Attack.com image).


Sadly, this will come as no surprise...

Tom Rogan of National Review reports the Pentagon has issued an apology, after a U.S. Air Force B-52 flew within two miles of a Chinese-built artificial island in the South China Sea last week.

"...the Pentagon’s response has been equally telling. Instead of broadcasting that America will reject China’s claims in the East China and South China Seas, and instead of asserting that American forces will of course operate in international territory, the Pentagon groveled before China, offering apologies. The [Wall Street] Journal (which first broke the story) reports that the B-52 aircrew is being investigated and that the Pentagon is hinting that “bad weather” led the crew to make a mistake. It’s Scapegoating 101."

He also notes the White House has been silent on the incident.  Rather interesting, since President Obama openly challenged Chinese expansionism in the South China Sea at last month's APEC summit, offering a "commitment to shared security of the region's waters and to freedom of navigation.  Mr. Obama's remarks came only weeks after an America destroyer sailed within 12 miles of another artificial island built by China.

Clearly, the B-52 flight was another freedom of navigation mission, and it was hoped that Mr. Obama (and his military advisers) would stand behind the BUFF crew.  But when Beijing lodged a vigorous protest, the bomber crew was left twisting in the wind.  Officially, the White House hasn't responded to the incident and it's a fair bet they won't comment unless they're forced to.  China continues to build new islands at a frantic pace--by one estimate, they have reclaimed over 2,000 acres in the past 18 months, and placed military equipment on some outposts.

Beijing's goals are quite clear; the new islands extend its military reach into the disputed Spratly Islands, which are also claimed by Vietnam and the Philippines.  China's growing presence in the region poses a direct threat to key shipping routes and energy reserves that lie beneath the ocean's floor.

America's response to this challenge has "evolved" rapidly, to use a favored White House term.  In May, a U.S. Navy P-8 patrol jet flew very close to Fiery Cross Reef, site of another Chinese reclamation project.  The aircraft and its crew received eight different warnings from PRC controllers before departing the area.  A Navy littoral combat ship (LCS) also passed near disputed positions in the Spratlys during the same period.  In both cases, the U.S. said it was exercising its freedom of navigation rights under international law.  Nations may claim a 12-mile territorial limit around natural islands they control, but the same restriction does not apply to artificial atolls.

In other words, the BUFF crew did nothing wrong by flying near the Chinese-built island, except ruffle some feathers in Beijing.  But that was enough to put the White House and Pentagon in panic mode and they quickly issued the requisite apology. It's a fair bet that American ships and planes won't make another close approach to any of China's artificial islands anytime soon--exactly what Beijing wants.  By applying a little pressure, China forced Team Obama to kowtow, which will only raise more concerns about our willingness to confront the PRC, despite our much-touted military "pivot" to Asia.

Meanwhile, there are some answered questions about that B-52 mission.  For starters, there's the obvious matter of why the crew is being investigated for flying near an artificial island which cannot claim a territorial limit?  Secondly, it's equally clear this mission was aimed at "showing the flag" near PRC outposts in the South China Sea; what sort of distance was the plane supposed to maintain along its planned route of flight?

The Pentagon claims that "bad weather" may have caused the plane to go off course, but offered no additional details.  Officials have not released the actual date of the flight, so it's difficult to determine when weather conditions (such as thunderstorms) might have forced the crew to deviate from their planned route.  Likewise, the military has not provided rules of engagement for such missions, although video from earlier flights seems to show aircraft within 12 miles of the artificial islands, and under existing conventions, we could overfly those outposts without violating the law.

It's also worth noting that B-52's are equipped with GPS and a navigator is part of the five-person flight crew.  So, it's a bit more difficult (at least in theory) for the giant bomber to deviate from its intended flight path.  It is also a fair bet that the navigator on the mission was not a "newbie" fresh from the schoolhouse at Barksdale.  For a sensitive flights like those near disputed islands in the South China Sea, the B-52 detachment on Guam would only assign an experienced crew--someone with hundreds, perhaps thousands of hours in the jet, and possibly qualified as an instructor or flight examiner as well.
In the interim, the BUFF crew is probably grounded, awaiting their fate as pawns in a geopolitical game.  It would be a damn shame if they were actually punished for doing their job--by the same, feckless political/military hacks who sent them in the first place.

These operations look more like innocent passage than freedom of navigation. They implicitly recognize the legitimacy of China's claim.

In the cold war days a navigation error that caused an international incident resulted in a Flight Evaluation Board for the AC and Nav.

I recall two cases of this in the early 80s, an F-4 and a Rivet Joint operating near Korea. Both were errors of a couple of miles.

I wonder if there will be any FEBs from this incident? I suspect not.

Nobody believed Francis Gary Powers was off course due to weather either.

Jim: I believe you are correct about the FEB--at least, I hope you are. If there's anyone in the Global Strike Command/PACOM chain that still has a set, they will quietly let the crew resume flying, with no paper to hinder their career. Again, no one has released full details of the incident, but it appears the BUFF crew was simply performing their assigned mission, and their only crime was upsetting Beijing. Naturally, that put Barry & Co in full panic mode, so they had to do something to appease their Chinese masters and the toadies in the Pentagon were only happy to comply.

My own favorite story about navigation errors (that didn't result in international incidents): I began my Air Force career as a unit historian. One of my early assignments was with a SAC tanker group at a base in the southeast. Despite my lowly rank at the time (E-4) I still attended the commander's weekly staff meetings since I worked for him. Remember one such meeting where they reviewed the performance of our hand-picked crew in the annual SAC Bomb-Nav competition. As the name implied, the competition put an emphasis on navigation skills, and those were particularly important on the tanker side of the house.

During this particular meeting, the commander was fuming, because one of our crews had finished dead last in the tanker competition. The problem: the nav called for a wrong turn, which put our KC-135 off-course for almost 30 minutes. By the time the error was discovered, the damage had been done. As I recall, our crew was a Select crew, so they were supposedly among SAC's elite. I think the crew remained intact after that debacle, but they lost their "Select" status.