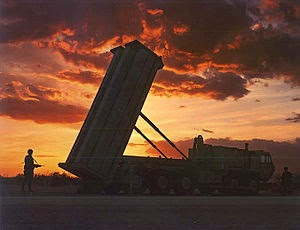 
As Stalin was fond of saying, "quantity has a quality all its own," and that certainly applies to missile defense.

One of the more effective counter-measures against advanced defensive systems like the Patriot, Aegis and S-300 is old-fashioned brute force: simply launch more missiles than the interceptors can handle.  As a war-gamer for the Air Force in the late 90s, I recall some simulations of a PRC missile attack against Taiwan; the more optimistic estimates predicted that Taipei's Patriot batteries would last for a few minutes before running out of missiles and becoming targets for the next wave of CSS-6 and CSS-7s from the mainland.

Once again, it's a matter of quantity.  North Korea has as many as 1,000 missiles available for use against targets below the 38th parallel and in Japan.  While many are older Scud-series missiles, they could (when launched in massive volleys) overwhelm missile defenses on the peninsula.

Dr. Jackson and other experts believe the U.S. should deploy a Terminal High-Altitude Area Defense (THAAD) battery to South Korea.  With a more powerful radar (and longer-range interceptor missiles), THAAD could play a useful role in negating Pyongyang's more capable missiles, at greater distances.  And, because of China's heavy-handed lobbying against a THAAD deployment, Seoul is growing more receptive to the idea.


“The Koreans are much more favorable about THAAD,” [Jackson] said, “than they were six months ago.” That’s not because of any brilliant strategy on America’s part — the US hasn’t even made an official proposal to deploy new missile defense, he said — but because of “heavy-handedness” on the part of the Chinese. In a twist that must make Sun Tzu spin in his grave, China has lobbied South Korea so hard against the THAAD deployment that Koreans, as a backlash, are now more in favor of it.

Even so, said Jackson, “I wouldn’t anticipate South Korea asking for a deployment of THAAD without some kind of precipitating event, [such as] maybe a fourth nuclear test” by the North. Of course, if there’s one thing we can count on in the unpredictable peninsula, it’s that Pyongyang will do something provocative, given time.

Indeed, even Beijing has voiced recent concerns about the North Korean threat, but they want the U.S. to use diplomacy to deal with the problem, rather than a military build-up.  The PRC has even claimed the THAAD radar could be used to "spy" on their activities, a charge that is downright laughable.  THAAD is a purely defensive system, but that doesn't stop the Chinese from campaigning against additional deployments in the Far East.

Clearly, PLA leadership is concerned that THAAD technology will eventually make its way into the defense forces of South Korea, Taiwan and Japan, following the examples of Patriot and Aegis.  With ballistic missiles forming a key element of its regional strategy, Beijing will clearly reject any moves that would lead to better missile defense capabilities among its neighbors.

For now, it looks like China will get its way.  The Obama Administration goes out of its way to avoid antagonizing our adversaries, and the PRC certainly falls in that category.  While the White House approved a THAAD deployment to Guam in 2013--and that presence has been sustained for more than two years--there are no plans to send other batteries to South Korea.  That raises a couple of interesting scenarios, namely how Washington would respond to a fourth nuclear test by Pyongyang, or the first launch of a BM-25 Musudan, or the KN-08, which is capable of reaching targets on the U.S. West Coast.

There's also the matter of limited assets and military budgets in an era of sequestration.  Earlier this year, senior Army officials warned that air defense artillery units are facing the same problems caused limited funding and frequent deployments.  While ADA elements don't rotate to Afghanistan, they are currently supporting a number of deployments around the globe.

Earlier this year, the Deputy Commander of the Army's 32nd Air and Missile Defense Command reported that, on any given day, roughly half of the nation's Patriot batteries are deployed outside the CONUS.  The Army Chief of Staff, General Ray Odinero has stated that the current pace of missile defense deployments is "unsustainable."  Equipment is wearing out, highly-trained soldiers are getting out and needed upgrades are being delayed by the current ops tempo.

That must be music to Pyongyang's ears.
***
ADDENDUM:  These types of discussions always demand an important caveat: BMD is not based entirely on shooting down missiles in flight.  Destroying launchers on the ground is always effective and our capabilities to locate and target mobile missiles has improved since the first Gulf War, along with our ability to pass that information to airpower assets.

Unfortunately, the number of aircraft available for SCUD hunting has declined dramatically.  At the start of Desert Shield, the U.S. Air Force had more than 180 fighter squadrons.  Twenty-five years later, that total is at 54, and it will soon decline to 49--and not all of those units are trained or equipped for taking out ballistic missiles.  Drones can fill part of that gap, but their payload is limited and UAVs are more vulnerable to the large volume of AAA fire that North Korea can generate.

Finally, it's worth noting that Dr. Jackson is a visiting fellow at the Center for a New American Defense, a think tank founded by Democratic security and policy experts.  When he describes missile defense capabilities in South Korea as "inching towards a crisis," the situation may be worse than we think.

The ever-growing welfare state will continue to capture ever-larger shares of the federal budget and the GDP. This process is inexorable in a democracy. The result is that every other budget category must shrink, including especially the military.

In the near future, all branches of the military will become substantially smaller. Moreover, spending on new weapons systems, such as the F35, will be curtailed sharply. There will be no new bomber, no new carrier force (Ford will join Seawolf and Zumwalt), etc. The nuclear Triad will become a Monad with a half dozen or so Ohio replacements.

The US will continue to have a world presence and influence, but it will not be a world power. Adversaries like Russia and China will dominate in their regions. The US will not be able to defend Taiwan or South Korea, but a defense of Japan is possible. NATO might shrink back to its pre-1991 membership. That by the way would be desirable. NATO threatens to entangle us in fights we can't win, like Ukraine.

In the coming multi-polar New World Order, the US will not be able to act unilaterally anywhere outside the Caribbean. Should be interesting.

Sadly, I can't disagree. There isn't a politician in Washington who is serious about entitlement reform and with millions of baby boomers now entering retirement, they will squeeze defense for every dime that can be diverted to social security and Medicare.

And those choices will be very popular; my generation is (by far) the most selfish and self-centered in history. As long as the bennies keep rolling in, the world can go to hell in a handbasket and no one will bat an eye.

The devolution you describe will last until China decides it wants to be the global hegemon, and American will take its marching orders from Beijing. And, with China owning a good chunk of our debt and possessing (by that time) a far more powerful military, we will have no choice but compliance.

But hey, as long as the Boomers get their social security checks, who cares if their descendants live as slaves.

Is that a euphemism for
"The Obama Administration goes out of its way to pander and defer to every potential adversary."?

Instead of all "defense", all the time, maybe its time to restart planning for the long sidelined, mush maligned concept of devastating offense. Our enemies sure have.