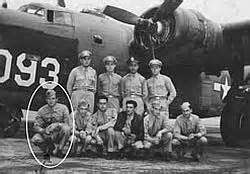 Before he became an All-American football player at Penn and a legend in the NFL, Chuck Bednarik (circle) flew 30 combat missions as a B-24 gunner over Europe during World War II.

Chuck Bednarik, the Philadelphia Eagles Hall of Fame center and linebacker, one of the NFL's last "two-way" players and one of the game's legendary tough guys has died.

The team announced that Bednarik passed away Saturday at an assisted living facility in Richland, Pennsylvania at the age of 89, after a brief illness.

Bednarik played his last snap more than 50 years ago, but his reputation as a fearsome competitor remained fresh and vivid for older fans, students of the game and anyone who watched film of number 60 on the gridiron.  Playing in an era that produced some of the NFL's most unforgettable players, Bednarik ranked among the league's best as both a center and a linebacker.

On offense, Bednarik was cat-quick off the ball and a jolting blocker; as a middle linebacker, he often flattened running backs and receivers who were unlucky enough to meet him in the open field.  And he played both positions at a high level throughout his 14-year NFL career; in fact, Bednarik was such an outstanding player that the NFL named him the first-team center on its 50th Anniversary squad, and the Eagles voted him both the starting center and middle linebacker on their 75th Anniversary team in 2007.  He was elected to the Pro Football Hall of Fame in 1967, his first early of eligibility.  The Eagles retired his number in 1987, a quarter-century after Bednarik's retirement from the game.

While his playing days stretched across three decades, Bednarik is best remembered for two stellar defensive plays in the twilight of his career.  Facing the Green Bay Packers in the 1960 NFL Championship Game, Bednarik was moved to outside linebacker in the closing moments of the game, with the Packers on the verge of scoring the winning touchdown.  The Eagles defensive coaching staff told him to keep an eye on fullback Jim Taylor, who was expected to get the ball.  Knifing through a wall of Green Bay blockers, Bednarik dropped Taylor short of the goal line, then sat on him to keep the Packers from running another play.  When the clock ran out, Bednarik told him "You can get up now, Jim.  This game is over."

A few weeks earlier, in a key match-up with the New York Giants, Bednarik delivered one of the most devastating hits in the history of the game.  Giants star Frank Gifford caught a short pass across the middle and headed for the sidelines, trying to get out of bounds and stop the clock.

He never made it.  Bednarik blindsided Gifford with a high, vicious--though perfectly legal--hit that knocked out the Giants running back and forced him to fumble.  Bednarik pumped his fist in celebration, not realizing, he said, that Gifford was badly injured.  Diagnosed with a "deep brain concussion," Gifford did not return to the game for 18 months.

In some respects, the collision between Bednarik and Gifford represented a similar clash between the "old" NFL and the media-driven league that would soon dominate American sports.  Gifford was a handsome, articulate player who would go on to a long career as a broadcaster.  A product of USC, Gifford made more money off endorsements than Bednarik earned from his contract with the Eagles.

The son of a Czech immigrant who worked as a laborer for Bethlehem Steel, Bednarik was a graduate of Penn, but his working class background and demeanor, made him, in the words of one writer, a "most unlikely Ivy Leaguer."  His biggest contract in the NFL paid $27,000 a year, so Bednarik supplemented his income with an off-season sales job at a cement company, earning him the nickname "Concrete Charlie."

But there was another chapter in Bednarik's life, one that made him even tougher, and it came before his days as an All-American college football player, and stardom in the National Football League.  Like thousands of other young men, Chuck Bednarik came of age in the crucible of World War II, in the flak-filled skies over Europe, as a waist gunner on a B-24 bomber.  From a profile of Bednarik in Sports Illustrated, published in 1993:

"...Thirty times he went through that behind his .50-caliber machine gun. He still has the pieces of paper on which he neatly wrote each target, each date. It started with Berlin on Aug. 27, 1944, and ended with Zwiesel on April 20, 1945. He looks at those names now and remembers the base in England that he flew out of, the wake-ups at four o'clock in the morning, the big breakfasts he ate in case one of them turned out to be his last meal, the rain and fog that made just getting off the ground a dance with death. ''We'd have to scratch missions because our planes kept banging together,'' he says. ''These guys were knocking each other off.'

Bednarik almost bought it himself when his plane, crippled by flak, skidded off the runway on landing and crashed. To escape he kicked out a window and jumped 20 feet to the ground. Then he did what he did after every mission, good or bad. He lit a cigarette and headed for the briefing room, where there was always a bottle on the table. ''I was 18, 19 years old,'' he says, ''and I was drinking that damn whiskey straight.''

The passing of time does nothing to help him forget, because the war comes back to him whenever he looks at the tattoo on his right forearm. It isn't like the CPB monogram that adorns his right biceps, a souvenir from a night on some Army town. The tattoo on his forearm shows a flower blossoming to reveal the word MOTHER. He got it in case his plane was shot down and his arm was all that remained of him to identify."

Who knows...after 30 missions with the Mighty Eighth, in a job where the odds of surviving a combat tour were about one in three, perhaps the terrors of the gridiron seemed mild in comparison.  Chuck Bednarik was a hero in every sense of that over-used word, and we won't see his likes again.

May he rest in peace. He was one of those quiet heroes. That he was able to play pro ball was just icing after what he'd been through.

I don't share your pessimism. We will have another "all hands on deck" time like WWII and once again we will find heroes from the people who spend their lives making sure the rest of us can live.

There are many Chuck Bednariks out there. When that call comes, they'll be there.