Lessons of the Dome 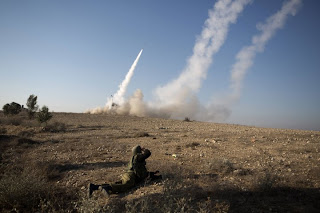 As the cease-fire between Israel and Hamas continues to hold, many analysts are scratching their heads over the fundamental question: why did the terrorist organization instigate a sudden war with their implacable foe?  In hindsight, the week-long conflict looks like a major disaster for Hamas, despite the usual pronouncements of bravado from surviving terrorist leaders.

History will show that Hamas had been ramping-up operations for weeks before launching a full-scale rocket offensive against Israeli targets.  The breaking point (ostensibly) was Israel's elimination of a key terrorist leader, blown up in a precision strike by the IAF.  Hamas warned that the assassination had "opened the gates of hell," conjuring up images of the 2006 conflict between Israel and Hizballah, when thousands of rockets rained down on Israeli towns along its borders, killing at least 40 Israeli civilians.  The rocket barrage also had a major impact on ordinary life; thousands of Israelis, particularly in the north, relocated to areas that were less vulnerable, while thousands more were forced to remain in close proximity of their air raid shelters.

This time, the results were much different.  With "Iron Dome" rocket defense batteries deployed at key points along the border and near major population centers (Tel Aviv, Jerusalem), the terrorist rocket campaign was completely ineffective.  By some estimates, Iron Dome intercepted between 80 and 90% of the rockets fired at Israel, and the intercept rate actually improved in the latter stages of the conflict, as Israeli operators and system contractors tweaked its performance.  Three Israeli civilians died in the latest rocket barrage, a decrease of more than 70% from 2006.   The air raid sirens still produced jitters among the Israeli populace, but the psychological, economic and social impacts were less pronounced this time, as civilians realized that Iron Dome could knock     down most of the rockets fired their way.

Which brings us back to Hamas and their grave mis-calculation.  What did the terror group hope to accomplish with their near-term offensive?  Weaken Israeli Prime Minister Benjamin Netanyahu during the run-up to Parliamentary elections?  Divert attention away from Palestinian leader Mahmoud Abbas, who is scheduled to address the U.N. in the coming weeks?  Force Egypt into the conflict on the side of Hamas?  If any of these represented actual goals, then Hamas failed, and failed spectacularly.  Not only did their rockets inflict insignificant injuries and damage in Israel, but Hamas paid a heavy price for its effort.  More than a week of counter-strikes by the IAF killed several senior terror leaders and badly damaged their infrastructure for missile launch operations and logistical support.  It will take more than a year to replenish the assets lost during a week of concentrated Israeli air strikes.

But perhaps the Hamas offensive had more narrow objectives.  It's worth remembering that the terror group does nothing without the support of its allies in Iran; after all, who do you think is the source for most of the rockets launched from Gaza into Israel.  So, the latest rocket war had the clear backing of Tehran, which raises obvious questions about Iranian motives.

To be sure, the Tehran government supported some of the political goals outlined previously.  But Iran also had military reasons for goading Hamas into a short-term war with Israel, reasons that go well beyond killing innocent civilians and inflicting maximum property damage.  In fact, it might be argued that Iran was interested in an operational test of the Iron Dome, to determine the system's operational capabilities against larger volleys of Palestinian rockets.  When it became clear that the defense system was up to the task, Iran had no problem with Hamas running to Egypt (in the best tradition of Arab war-fighting) and asking them to arrange a cease-fire.

Iron Dome's performance is of obvious concern to Iran.  Most scenarios for a conflict between Israel and Tehran feature massive missile attacks against the Jewish state, with many of the  rockets launched from places like Gaza, southern Lebanon and even Syria.  If these attacks could overwhelm Iron Dome, the thinking goes, the Israelis might be forced to allocate other assets against the long-range rocket threat (read: Patriot batteries), leaving the country with less protection against ballistic missile, such as Iranian Shahab-3 missiles.

Of course, the Israelis have long considered that possibility, prompting the deployment of a layered anti-missile system, built around the Iron Dome (for short-range rockets); upgraded Patriot units for short-range missiles like the SS-21 and SCUD variants, and the Arrow II system for longer-range missiles from Iran.  The recent conflict demonstrated that Iron Dome can handle mass volleys of rockets--including the larger Fajr-5--without assistance from other assets.  At one point, the Palestinians even tried to refine their "saturation" tactics, concentrating their launches at a single Iron Dome battery.  Their scheme failed; the system engaged rockets that threatened populated areas, while ignoring those bound for the open countryside, just as it was designed to do.  Not long after that failed "project," the Palestinians were pressing for a firm cease-fire.

While political motives for the "November war" cannot be discounted, it also seems clear that Hamas (along with its Iranian patrons) wanted a better read on how their tactics would fair against the Iron Dome, which is now entering wider operational service.  To say the least, Hamas got its answer during the week-long war, and it wasn't the one they were looking for.

So, the terrorists--and the Iranians--will go back to the drawing board, searching for tactics that will make future rocket barrages more effective.  It's a sure bet that future campaigns will begin with some sort of terrorist raid against Iron Dome batteries along the border, followed by a huge vollley of rockets through the area guarded by the site was was under attack.  But once again, the Israelis have an answer for that scenario; perimeter defense is the first mission of any air defense system in the field, and the IDF can easily provided additional assets to secure the Iron Dome sites.

Another, more frightening possibility is the use of chemical weapons during future Palestinian rocket attacks.  If you know only a handful of your missiles will get through, equip them with a warhead that will inflict maximum casualties.  Unconfirmed reports indicate the Palestinians were contemplating such a move during last week's attacks, but there is no evidence that a chemically-tipped rocket was launched towards Israel.
Posted by Unknown at 8:20 PM

Good points, and I think Iran is 'really' the ones that wanted the data... Just sayin...