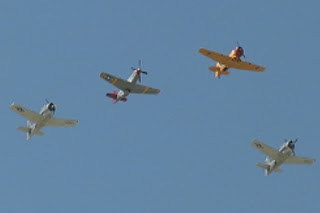 Air show pilots in Kansas City perform the missing man formation in honor of Bryan Jensen, an aerobatic pilot who died during a performance on Saturday (KCTV photo)

It's been a tough weekend on the air show circuit; since Friday, two demonstration pilots--including a member of the RAF Red Arrows--have died in crashes, and wing walker Todd Green fell to his death this afternoon at the Selfridge Air Show in Michigan.

Witnesses told WXYZ-TV that Greenplunged more than 200 feet while trying to transfer from an aircraft to a helicopter. Green was a second-generation air show performer, known for daring mid-air transfers between aircraft--without a parachute. At the time of the accident, Green was standing on the upper wing of a Stearman bi-plane, attempting to grab the runner of a helicopter flying just above him. It was a stunt that Green had performed hundreds of times before.

"He was reaching for the spar underneath the helicopter and just fell." [spectator] Arnold Sese told Action News. "It looked like a dummy falling to the ground. But when the emergency crews started rushing to the runway everyone knew it wasn't part of the stunt."

Sese says about a dozen spectators jumped the fence and rushed to the midfield area to help, but were quickly pushed back by the first responders. After that a stunned hush fell over the crowd as they waited for updates

Green's accident came only one day after aerobatic pilot Bryan Jensen died in a crash at the Kansas City (Mo) Air Show. Jensen, another air show veteran, was performing a routine in his custom-built biplane, nicknamed "The Beast," when he failed to pull out of a dive. The plane slammed into the ground in front of thousands of spectators, killing Jensen instantly.

Meanwhile, British authorities are investigating Friday's crash that claimed the life of a member of the Red Arrows precision flying team. Flight Lieutenant Jon Egging, 33, died Friday near Bournemouth, just moments after the Arrows had completed a demonstration for a local flight festival. More from the U.K. Telegraph:

Flying under the call sign RED 4 he had suddenly peeled away from the other eight Red Arrows as they headed back to Bournemouth international airport after performing at the town's air festival.
The jet flew low over houses and other buildings before crashing into a field near the village of Throop, Dorset, bouncing several times and splitting into two mangled pieces.

Group Captain Simon Blake, the Commandant of the RAF’s Central Flying School, said paid tribute to the pilot. He said: “Flight Lieutenant Jon Egging, known as 'Eggman’, joined the Team as Red 4 in the autumn of 2010.

“A gifted aviator, he was chosen to fly in the Red 4 slot, on the right hand outside of the famous Diamond Nine formation - an accolade in itself being the most demanding position allocated to a first year pilot.

“Throughout his winter training and the display season to date, his professionalism, skill and humility have shone through."

Egging, who joined the RAF in 2000, flew Harriers before being selected to join the Red Arrows last year. He is the first Red Arrows pilot to die in a crash in more than 30 years. Residents near the crash site said Flight Lieutenant Egging appeared steer his aircraft away from houses before attempting to eject.

With these most recent mishaps, there have been a total of seven air show accidents during 2011, resulting in four deaths (the other fatality, stunt performer Amanda Walker, passed away in late May from injuries she received in a March crash at Brownsville, Texas).

Over the past decade, there have been at least 52 major accidents at air shows around the world, resulting in 127 fatalities. However, that death toll is somewhat misleading, since 99 of the deaths occurred in two crashes from 2002, one in India, the other in the Ukraine. That latter incident, the Sknyliv Air Show Disaster, was caused when two pilots lost control of a Ukrainian Air Force SU-27 and ejected. The jet hit the ground and bounced off the nose of a parked transport aircraft before exploding, killing 77 spectators on the ground.

While there's an element of danger in air show flying, it's amazing that more accidents don't occur. And the reason they don't is very simple: the flight routines and other aerial stunts that we marvel at are performed by professionals who train constantly, using the best equipment in the aviation industry.

They put their lives on the line because flying and performing are passions, one often shared across generational lines. Amanda Walker, the wing walker who died earlier this year, was performing with her husband Kyle at the time of their crash. Their fathers, Jimmy Franklin and Bobby Younkin, died in 2005, when their biplanes collided during an airshow performance in Canada. It's not much consolation to the families and friends of the pilots and performers who have passed in recent years, but all died doing something they loved, challenging fate (and physics) until that final moment.

So, the next time you watch an airshow routine, remember that person in the cockpit, or the daring individual on the wing of that airplane. Their performances are truly extraordinary, and their margin for error is very, very small. All the more reason to cheer and marvel.
Posted by Unknown at 5:31 PM